Updated Fantasy Draft rankings by position by our team of experts. 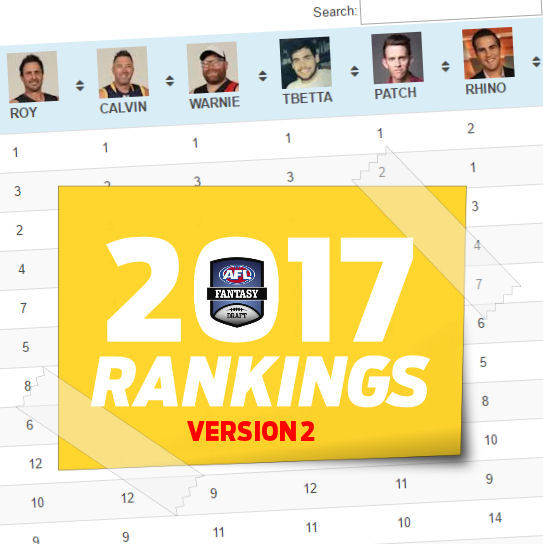 The 2017 AFL Fantasy Draft Rankings compiled by Roy, Calvin and Warnie with the help of some of their draft guru friends – Tbetta, Patch and Footy Rhino. These rankings – by position – aim to help you for your leagues on Draft Day. Each contributor was asked to rank their top 80 defenders, 100 midfielders, 24 rucks and 80 forwards for Draft. These have been sorted as a ‘site average’ using everyone’s picks. We do aim to update this in early March after watching some JLT Community Series and so it is closer to when most people will be drafting.

Don’t forget you can head to afl.com.au/fantasy for our official Draft Kit we produced, but for those who would like to print these DT Talk rankings – compiling all six opinions, you can grab a 2 page pdf to sit next to you as you draft. Scribble on it, change what you want but this will be a handy resource for your draft day.

REGISTER FOR DT SHIVA BY MARCH 5.