Nat Fyfe as a FWD is making AFL Fantasy coaches excited, but should we start with the Docker star? 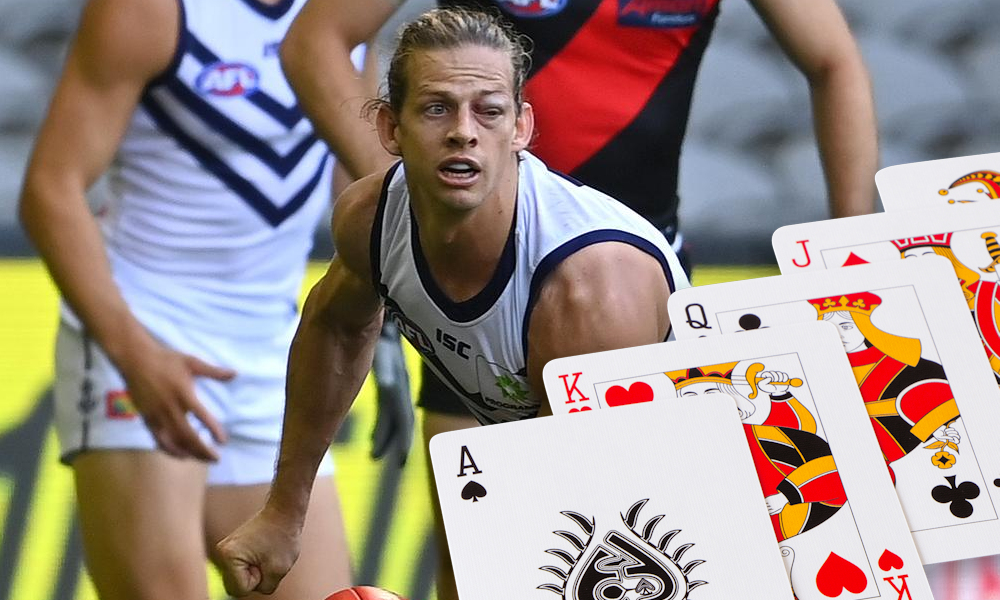 Nat Fyfe has built up the reputation as one of the AFL’s greatest talents, so why wouldn’t you want that guy in your starting fantasy team? Not many midfielders are capable of breaking a tag like Freo’s greatest player ever (sorry Pav). The dual Brownlow medalist has forged a career out of explosively bursting through stoppages at the expense of anyone in his way – opponents or teammates alike.

The physically imposing Fremantle skipper has a trophy cabinet littered with personal accolades and in 2021 there is an opportunity for Fyfe to push his fantasy average above 105. The amount of time he spends as a forward (more on that in a minute) may hamper his ability to post career-best fantasy numbers, but Fyfe certainly has the talent to boost his average 10-15 points from the 93.8 points he starts the year priced at.

He managed to produce that adjusted average despite attending just over 50% of Freo’s centre bounces in season 2020 and as Fremantle hands more midfield reps to the likes of Caleb Serong, Andrew Brayshaw and Adam Cerra, I don’t expect Fyfe’s numbers to completely tail off. Despite his lack of elite AFL fantasy seasons, Nat Fyfe is one of the rare types who can impact a game in multiple categories across the board. For his career, the dynamic Dockers averages 25 disposals, over 4 marks and nearly 4 tackles per game – capable of hitting the scoreboard in a positive way too.

Kicking 158 goals from his 187 career games has him sitting 9th on Freo’s all-time goalkicking list, which probably says more about the Dockers as a club than Fyfe’s forward talents! Either way, his ability to impact the game inside-50 and prove to be a nightmare matchup for opposing defenders gives Fremantle a handy string in their bow to potentially alleviate some of their well-documented struggles when it comes to kicking a winning score.

Nat Fyfe is looking DANGEROUS as a forward, kicking 5 goals in the club’s match-sim on Saturday and pulling down this screamer 👀 #ForeverFreo pic.twitter.com/h3musWbZ4j

A flagged ‘forward switch’ is where a lot of Fyfe’s value lies as a fantasy player in 2021. With injury hampering the gun Docker in almost every season he’s played, it makes total sense for Fremantle to deploy him inside-50 in an effort to prolong his career. Capable of clunking contested pack marks (see above) and winning his fair share of the footy below his knees, it’s going to be difficult for the other 17 clubs to find a reliable matchup for Fyfe when he does sit forward.

There’s unquestionably a roadmap to Fyfe being one of the best fantasy forwards if he is gifted dual-position status throughout the season and spends time closer to goal. Should he produce another fantasy average in the high 90’s to low 100’s there’s every chance that translates to Fyfe being in the mix for a top-6 FWD spot, if not right amongst the top of the pecking order.

Simply put, you can’t lose if you’re really all in on picking Nat Fyfe this preseason. On one hand, he’s set to feature heavily inside Fremantle’s attacking 50, putting him in good stead to gain forward status in Round 6. Or, if this has been an elaborate ruse by the Dockers or the injury bug bites and Fyfe continues to chew up regular midfield clock, given his bulldozing, ball-winning history he’ll average close to, if note greater than triple-figures and make a lot of coaches satisfied.

For all the breathtaking plays he makes on the football field, Nat Fyfe actually has a mediocre track record as an elite fantasy player. The two seasons Fyfe won the Brownlow Medal, back in 2015 and 2019, were by far the best fantasy seasons of his career producing averages of 105.1 and 105.0 respectively. Excluding those years, Fremantle’s superstar has never topped the 105 mark, with just two other seasons with an average greater than 100 and four more years in the high 90’s.

It’s hard to classify Fyfe as a fantasy afterthought given that sustained success, but if he’s going to reside inside-50 more this season I can only see that putting a ceiling on his fantasy scores. Freo’s plan to deploy their superstar closer to goal has been talked about for months now with head coach Justin Longmuir telling the club’s website: “We’ve probably only got two genuine tall forwards on our list in Matt Taberner and Rory Lobb. Nat Fyfe will spend a little bit more time forward to give us that aerial contest.”

Wait, it gets worse.

“The thing about Nathan when he goes forward is that he draws a good defender. He makes that defender play on him which helps all the other forwards around him and he gives a really strong contest like he does in the midfield.”

Now I don’t know about you, but when Fyfe, Dangerfield, Dusty or these other explosive, versatile types go forward, if I’m an opposing coach I’m instantly looking to quell that players influence – which means that Fyfe won’t be in for an easy time when he does push up the ground. That’s bound to lead to some quiet outings and while I still expect the Dockers’ captain to nudge his average above 90, there are justifiable concerns over just how high that number will be.

If you need any further convincing that it’s not a wise idea to initially select Freo’s gun MID, he’s had a well-documented struggle with injury having never played a full 22 games for a fantasy season in his 11-year career. Leg fractures, concussions, a hamstring complaint, shoulder surgeries and even suspension woes have seen Fyfe feature in 20 or more game just three times, playing in 14 of a possible 17 games last year too. A lack of longevity isn’t exactly what you want from a player when you pick your initial team.

I can see the temptation in selecting the Dockers great, but Fyfe has never produced at an elite fantasy level. The possibility of adding forward status should see Fyfe end the year in more teams than ever before, but for $2K less I much prefer investing in someone like Tim Taranto – or for $29K more, Sam Walsh. The potential of FWD status makes him a juicy pick in Draft leagues, which will lead to some coaches over-drafting Fyfe, although I can’t see him going much greater than an average in the mid 90’s this season.