Hayden Young had his rookie season marred by injury, making him a tempting pick in 2021 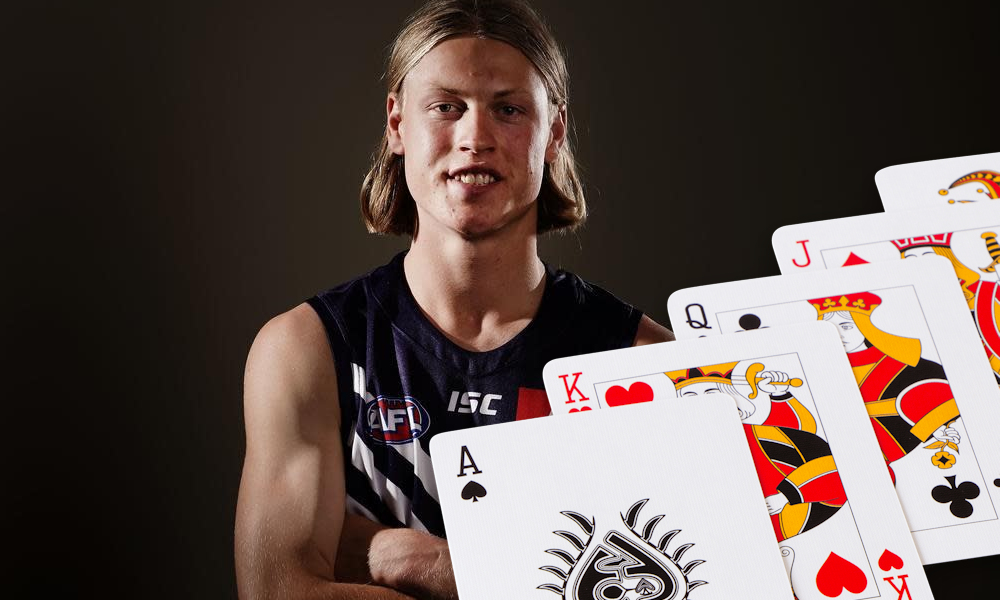 Almost 12 months ago to the day, I hit the keyboard for the 2020 Deck of DT and put forth the case for Hayden Young to be the best defensive cash cow available.

That didn’t go according to plan.

The Dockers rookie missed the bulk of last season after suffering a syndesmosis injury in Round 6 against the Saints, although there were flashes of promise from the former No. 7 pick. Now with a clean bill of health Young will look to cash in on the promise that surrounded him in his first AFL season.

Young’s price has inflated nearly $80K from his rookie campaign, but he is still a great value pick for one of your final on-field defensive slots. In shortened quarters last year, the booming left-footer produced mediocre scores of 39 and 32 in his first two games before busting onto the scene with a 77 and a 58 – amassing 16 disposals and 5 marks in both outings. He registered just one handball before going down against St Kilda, with that 2-point performance dragging his price tag down even further. Taking that score out leaves Young with an average of 51.5 from 2020, which, if you adjust to reflect full-length quarter equates to an average of 64.

Scores in the mid 60’s are what I expect consistently from Young in year two, but there’s a realistic chance the dynamic defender can push his average north into the 70’s. Touted as the best kick in the draft class of 2019, nearly 70% of Young’s disposals came via foot in his final season as a junior – a trend that continued in his first month of AFL action with 66% of his touches ending in a kick. His elite foot skills should become an important weapon for Fremantle out of their back-6 with Young poised to form a lethal intercept/rebound duo with All-Australian Luke Ryan.

While Young seems set to develop his craft in the backline, there are indications that he’ll play further up the ground for Freo in the future. Drawing comparisons to Stephen Hill thanks to his clean ball-use, Young was asked earlier this preseason about his potential move into the midfield stating:

Regardless of where he’s playing on the field, there’s every chance that the second-year defender can lock down a regular gig in the best 22 for the Dockers and relish his role as a +6 machine. Justin Longmuir showed in his first season at the helm that he wasn’t going to be shy playing the youngsters on Freo’s list and if Young can avoid the injury bug I can’t imagine a scenario where he plays less than 18-20 games. Slotting into the defensive unit at Fremantle to become a staple rebounding the ball and driving the team forward seems to suit Hayden Young’s skillset and if Longmuir gives him a licence to roam, his fantasy numbers are only going to benefit.

The inconvenient $337K starting price for Young means a lot of his value has already diminished. As I mentioned, the Freo sophomore already increased his value by more than triple figures after starting his rookie season at $258K. Of course, there’s still room to grow, but why select a player who has already made a significant jump in price from year one to two?

For roughly $20K more you might be interested in the upside surrounding Isaac Cumming or perhaps you want to opt for Wayne Milera who boasts a much more promising scoring output for an extra $110K. Both of these defenders seem to offer more fantasy upside from their starting price, with Hayden Young’s place in Fremantle’s permanent side hardly set in stone. While he did manage four games (plus one quarter) last year, Young wasn’t named to make a debut in Round 1 unlike most of his top-10 draft peers. In fact, his place in the Round 2 team only came about after Nathan Wilson was a late withdrawal from their match against Brisbane.

Sticking with Nathan Wilson, in most mock best-22 articles you can find online, you’ll see him taking up residence alongside Young in Fremantle’s half-back line to commence 2021. However, with Luke Ryan fresh off a career-year, he isn’t going anywhere and the likes of Joel Hamling and Alex Pearce are returning from lengthy injury layoffs too – meaning Young could be the one that finds himself squeezed out of the rotation.

The competition for spots doesn’t end there though. The Dockers opted to draft WA local Heath Chapman with the 14th overall pick in last year’s draft and the West Perth product brings a very similar skill-set and frame to their list as Young. Just last week Freo’s defensive assistant coach Matthew Boyd spoke about how Chapman has “been able to fit in seamlessly to what we’re doing training wise and the system we’re looking at playing”. That doesn’t mean he’ll overtake Young in the pecking order, but if Chapman earns an early debut and Young is the casualty, fantasy coaches could be stuck in an awkward position.

I contemplated a Jack rating for Young, but I feel fairly certain he’ll matter in 2021 from a fantasy standpoint. All of a sudden there are a lot of intercept marking types in Fremantle’s outfit, but I still think the club will do whatever they can to get the pill in Young’s hands. Maybe he struggles to start the year and puts up some worrying scores, however, the Dockers defender has enough talent and versatility to slot into a number of roles for Freo – with potential midfield clock only a plus for his fantasy output.