Will Freo’s Hayden Young emerge as the best defensive cash cow on offer in 2020? 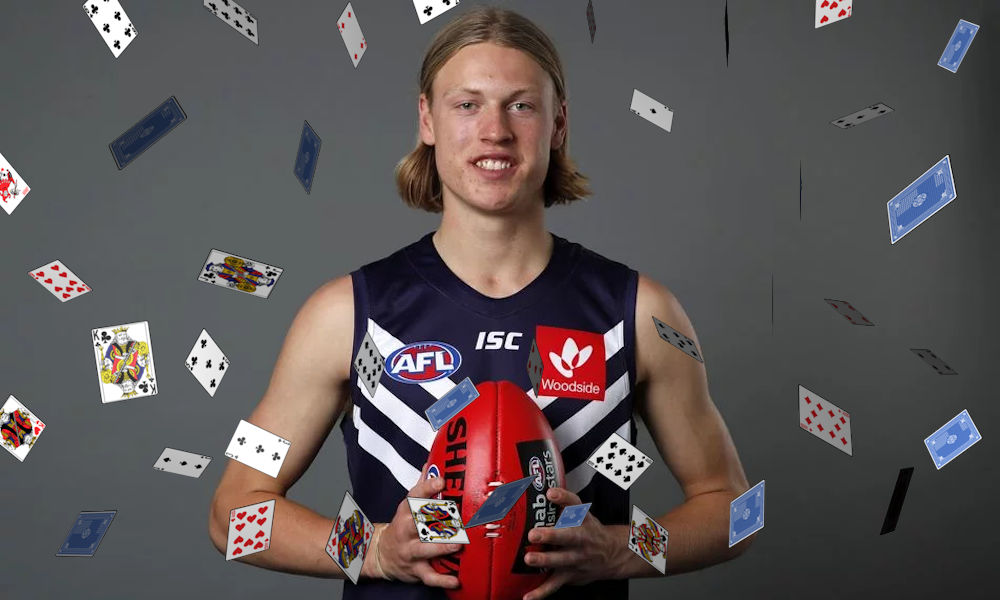 There’s a lot to like about Fremantle’s recent recruits, but from a fantasy perspective, Hayden Young is the standout pick of the bunch. Touted as the best kick in the 2018 class, Freo pounced on the Dandenong Stingrays product with their first pick and the 7th overall selection, landing a promising defender who, from day dot, can contribute to their rebuild and aid fantasy coaches in the process.

Nearly 70% of Young’s disposals in his final season as a junior were kicks, with the new Docker every chance to lock down a regular spot in the back six and flourish as a rebounding defender. He excelled in his final year with Dandenong, testing his abilities by pushing further up the ground and taking residence on a wing at times for the Stingrays. Look no further than his game against Gippsland Power in Round 15 where Young shone brighter than most by chalking up 25 touches, 4 marks, 5 tackles and a goal – good for a score of 108 fantasy points.

Young didn’t just shine in his 12 NAB league games where he averaged 84.7 points and over 22 disposals a game (15 kicks per), with his U-18 heroics for Vic Country equally as impressive. He maintained his high kick-handball ratio and emerged as one of the best prospects in the upcoming draft thanks to his silky foot skills and impressive athletic talents. When it comes to those athletic traits, Young stood out handily at the combine, posting the fastest agility test time ( 7.940) out of all the 2019 prospects! If you need any proof as to how good a kick Young is, check out the clutch left foot bullet he landed on Isaac Wareham’s chest without making his teammate break stride in the dying stages of the Championship decider.

Foot skills aside, there’s a lot to like about the newest Fremantle recruit, with Young poised to take up residence in their best 22 for the foreseeable future. The departure of pacy midfielders Bradley Hill and Ed Langdon could see Young not only thrive inside defensive 50, but also have an impact further up the ground if he’s given a license to roam. The Dockers already own an intercept defender stud in Luke Ryan and while it can’t hurt to have another weapon to set up their attack, new coach Justin Longmuir may give Young a chance to use that dominant left boot of his to really propel the Dockers forward.

Call me biased, but I feel like Freo is going to more competitive in the upcoming season with Longmuir steering the ship. That being said, there’s still plenty of question marks surrounding the Purple Army, with the ball more than likely set to reside inside their defensive half more than they would like. That could lead to Young racking up more touches than he might if he was playing for his blue and gold cross-town rivals, especially if he can display a cool, calm head when it comes to decision making out of the back-6. Glass half-full right Dockers fans?

A lot of AFL clubs believed that Hayden Young was the 3rd best prospect behind Gold Coast duo Matt Rowell and Noah Anderson in the class of 2019 and regardless of the colour of his jersey, Young’s ownership was always going to be high. Don’t be shocked if he mirrors similar scoring style/success to Xavier Duursma in your fantasy defense this year – albeit with less scoreboard impact.

Just because the opportunity is there for Young to be one of the best cash cows this season, doesn’t mean it will come to fruition, especially if Fremantle struggles to adopt Longmuir’s coaching philosophies in year one. He’s only been in the league for three seasons, but Luke Ryan has flirted with a fantasy break out in each of the past two years, only to end up hover around mediocrity and failing to boost his numbers to emerge as an elite defensive accumulator.

A similar fate could be bestowed upon Young in his debut year with a real possibility that Fremantle spends the year chasing shadows rather than getting their own hands on the footy and launching multiple counter-attacks. I’m cautiously optimistic that Young can be a fantasy factor no matter what the Dockers’ win-loss ledger looks like, but if they aren’t able to get their hands on the pill, that instantly impacts Young’s scoring output, potentially pushing him down to a pedestrian average in the low 60’s.

Another thing working against Young this year is the talents of his fellow first-round draft peers. Unfortunately, coaches won’t likely be able to pay up for ALL the young talents on offer and as a result, Young’s slightly inflated price tag might lead to coaches electing for a cheaper Will Gould, Jez McLennan or Trent Rivers type which would allow future manoeuvres. Matt Rowell, Lachlan Ash, Deven Robertson, Noah Anderson, Sam Flanders and even his new teammate Caleb Serong all boast a high ownership percentage right now and opting to choose most or all of them for your starting squad of 30 might leave Young as the odd man out.

I tried to mount a case against Young, but don’t be surprised if he pushes his average north of 75 and develops into the best defensive cash cow up for grabs this year. No offense to other rated recruits like Will Gould or Lachie Ash down back, but Young’s combination of scoring potential and job security has led to 40% of fantasy coaches picking him thus far. I only expect that number to rise.