What Fantasy coaches need to know for rounds 9-12

Get across the changes for Fantasy over the fixture squeeze.

Rounds 9-12 will be squeezed into 20 days with round 9 kicking off tonight and finishing on Sunday. Round 10 will start the next night and due to games every day, a round will finish on one day and the next one starting the following day.

A range of adjustments have been made to the game to help coaches navigate it in order to limit frustrations in what will be a challenging time.

For those who just want the dot points, here they are… I’ve expanded on more below.

If you’ve played that other game, you’ll understand a rolling lockout. If not, basically it’s like having our regular partial lockouts but for every game of the round. Full lockout would essentially be at the start of the final game of the round.

The main reason for this is not only due to the daily fixtures and the spread of matches, but because team announcements will now be at 6:20pm AEST on the day before teams play. That means there is no regular ‘Thursday night teams’ announcement, we’ll be getting teams daily.

Also, we are likely to see teams resting players and plenty of changes round-to-round. With a rolling lockout we will have the ability to trade or move our players around up until they are locked for their game.

See all times below.

Three trades per round every round

It was announced a couple of weeks ago that we will have three trades for every round for the rest of the season. They will be needed! Some coaches will be looking to hold on to one throughout the majority of the round just in case there is a big name out of a game. Still, strategy using your trades will be important.

Planning when you will fire off your moves is imperative. The goal should still be to improve your team through downgrade and upgrades while trying to limit sideways trades where possible. Obviously if big names are out, you may want to be aggressive – especially with poor bench cover – but remember the goal in Fantasy Classic is to make your team better as the season progresses.

Game number of the round each club plays in. Green indicates the last day of round, red indicates first. Suns are the best loophole for non-players, Port the worst. Something for the pirate to think about @CalvinDT #AFLFantasy @DTTALK @WarnieDT @RoyDT pic.twitter.com/oBZcBACazx

In a bold move, Fantasy Classic awarded average scores for the Essendon and Melbourne players when their game was postponed earlier in the season. This proved to be a good move, especially for Draft coaches, in what was something that was sprung on us. We may have some notice for these upcoming bye rounds; however, it isn’t what we signed up for and it will be unfair for Fantasy Classic coaches with varying numbers of players from teams on a bye and it is the sensible solution for Fantasy Draft players in order to get a season finished (there are likely to be more byes to come).

Things to note is that the season average will only be applied if they played in the 22 from the week before. Players on a bye will be locked at the first lockout of the round so if you want to trade one in/out, make them captain, put them on your bench or make them emergency, you will need to pull the trigger before the new round starts. Also, prices will change based on their ‘score’ awarded.

Being across all of the times, especially due to when you’re looking to trade and who you use for VC, C and any loopholes, will take some thinking. Below are the fixture as they stand at the moment with the times (local) to help you get set. Mapping out your moves and knowing when your trades would need to be made. If you’re rolling with a VC and only have one or two options of non-playing players, knowing when they play can help you decide whether you take the loophole or not. 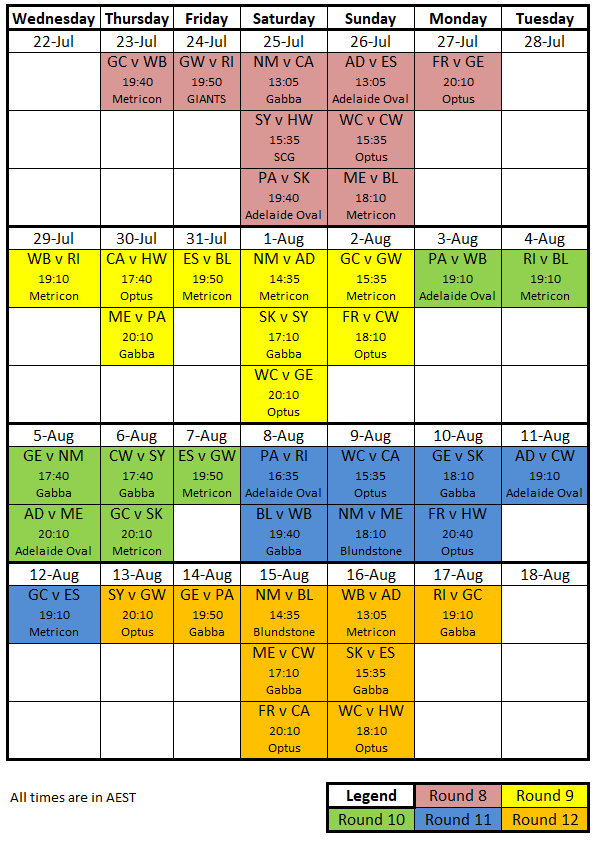