Prices, positions & tips for the Giants. 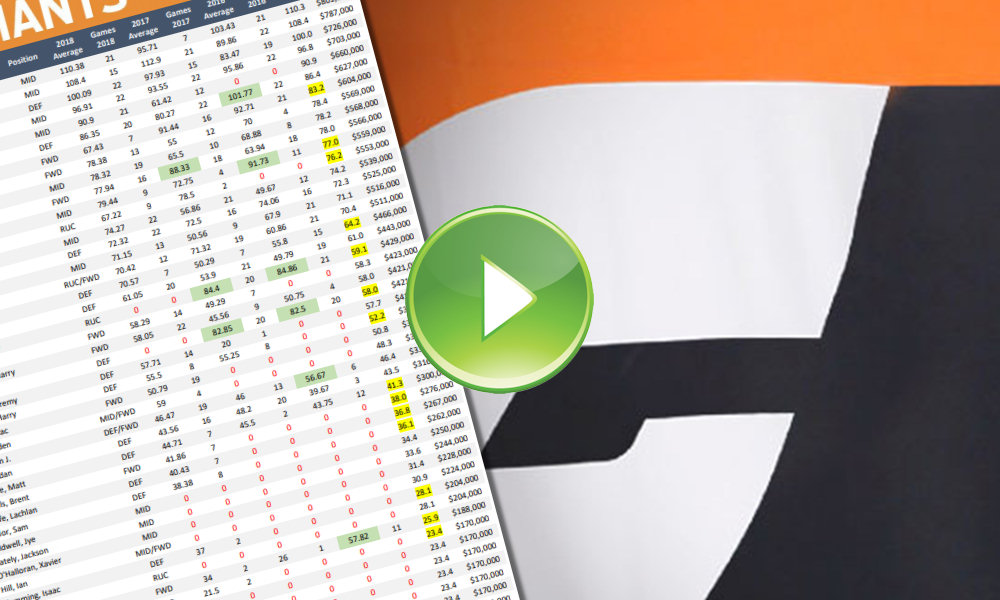 The Giants were up against it trying to deliver a balanced team in 2018, injuries were a major factor to premium players along with a deficiency at the Ruck position.

A total of 3 players were able to average 100pts or more last season (Incl. Finals), Stephen Coniglio was the leader recording an average of 111.3pts from 23 games.

If the Giants are able to complete a healthy upcoming season then expect the midfield group to put up decent fantasy numbers, additionally a few key departures in the off-season has created several opportunities in 2019.

After averaging 116.5pts from his opening 2 games Kelly injured his groin at Round 3 and subsequently missed 6 games, upon returning he averaged 117.1pts from his following 10 games but was slowed again by injuries late in the year in particular a knee injury which forced him to miss a Semi Final.

Given an injury free pre-season Kelly should be high on the radar to fill a premium spot at Round 1, his ability to put up elite numbers could be a great point of difference in 2019.

Coniglio provided a good base last season recording 25 Disposals or more in 20 of 23 games (87.0%), he recorded a season high 152pts against Melbourne in Round 23.

Based on his recent fantasy history Coniglio should be set to put up another solid fantasy season, he is definitely worth the investment.

Whitfield had a semi breakout season in 2018, it was the first time he averaged more than 100pts in a season (Incl. Finals).

Opposition clubs put some time into Whitfield last season, his range of scores were volatile at times but this was offset given his ability to hit a good amount of ceiling games.

Whitefield averaged 114.5 from winning games last season & 86.4pts from losing games, he may be a target for opposition clubs again in 2019.

Whitefield will be a popular target for fantasy coaches with his DEF status, he should be highly ranked in this category next season along with the possibility of picking up MID status.