Prices, positions & tips for the Eagles. 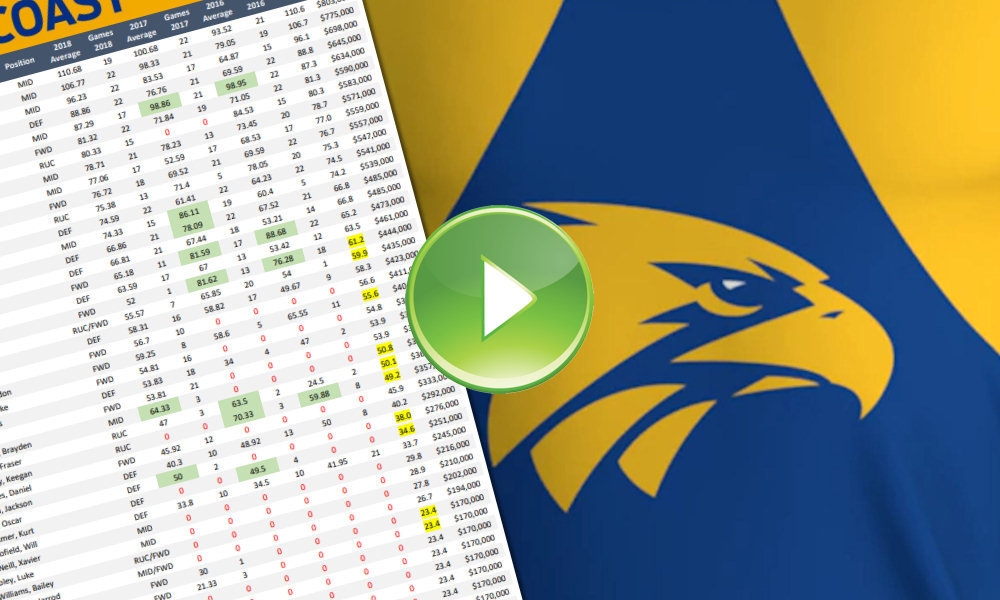 The absence of Nic Naitanui for likely the majority of the 2019 season will provide a volatile situation in the Ruck from a fantasy perspective, the Eagles lost Scott Lycett but acquired Tom Hickey & Keegan Brooksby for coverage.

Overall, it appears West Coast should provide a similar outlook again in 2019 with little change except for the Ruck roles.

The numbers for Yeo to finish the H&A season were elite, he averaged 123.0pts from his final 6 H&A games. Yeo averaged 102.3pts from 3 Finals including 144pts in the first Final for the Eagles.

Yeo recorded a career season high average of 6.7 Tackles in 2018, his role in the midfield is favourable to his fantasy game.

Many could by-pass Yeo at a high starting price at Round 1, as a result he could see a relatively low ownership which could provide a very good point of difference.

After a relatively slow start to the 2018 H&A season Redden finally started to put up decent fantasy numbers, he averaged 66.8pts from his opening 5 games of the year then finished the H&A season with an average of 104.9pts. Redden averaged 129.3pts in 3 Finals.

The return of Andrew Gaff may deter some from selecting Redden, in games without Andrew Gaff he (Redden) averaged 108.0pts and in the 5 games prior to the Gaff suspension his averaged spiked at 122.8pts per game.

Redden has been a prolific scorer in fantasy over the majority of his career, after dealing with injury issues prior to 2018 his game suffered. Ownership could be low-moderate for Redden at Round 1, he is definitely worth consideration.

It is always tough for a first year player to break into a team let alone a Premiership team, Luke Foley (2018 Draft: selection 31) played 1 year in the WAFL Colts for Subiaco after being overlooked in the 2017 Draft.

Foley averaged 17 Disposals & 8 Tackles in the 2018 U18 National Championships, at 188cm he plays as a tall midfield/forward role and can hit the scoreboard.

It is worth monitoring the pre-season for Foley, in 2018 coach Adam Simpson was willing to debut 8 players for the Eagles (AFL Rank: Eq 1).