Prices, positions & tips for the Dons. 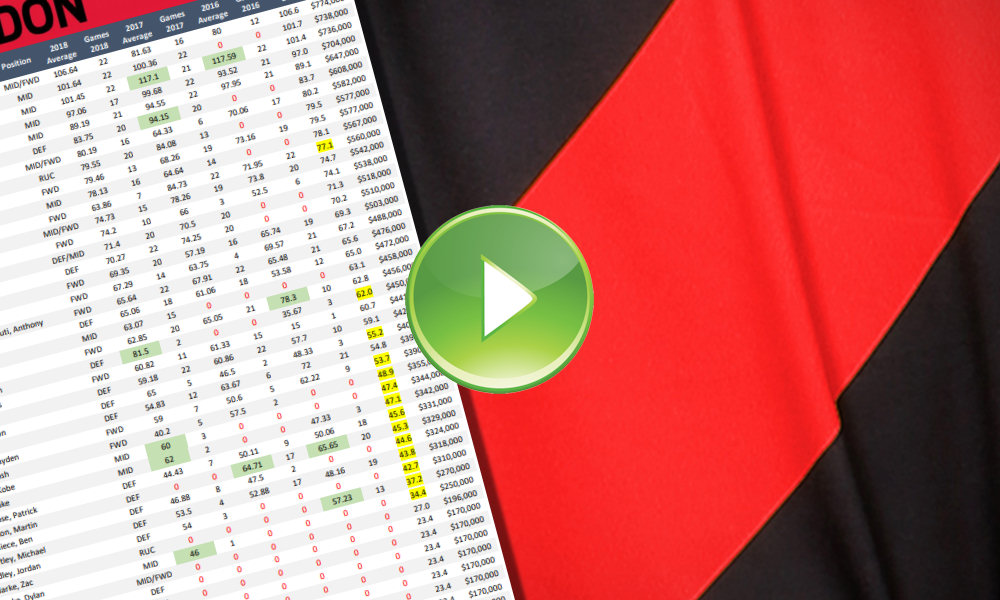 After a poor start to the 2018 H&A season Essendon were able to make adjustments mid-year for improvement, after averaging 374.5 Disposals between Rounds 1-12 the Bombers averaged 390.2 Disposals post their Round 13 Bye (Rank 3).

Essendon won 8 of their final 11 games of the 2018 H&A season, they averaged 392.0 Disposals from winning games & 379.3 Disposals from losing games over the same period.

Many expect the Bombers to be successful next season, an increase in the overall numbers would be likely if that comes to fruition.

Last season only 4 players made their debut at the Bombers, none debuted between Rounds 12-23. The Bombers ranked last on games played once a player made a debut, whilst this is not a definitive indicator from year-year it does provide a bit of perspective on the short leash at Essendon for rookies.

The addition of Dylan Shiel does provide a different mix on the outside at the Bombers next year, the 2 game JLT Series may be too small of a sample size to gauge any possible negative impact for Merrett next season.

Merrett is value based on his previous fantasy history, he will likely have a high ownership at Round 1 next season which is something to consider.

Smith averaged a career season high 8.5 Tackles last season (AFL Rank: 1), this was a significant increase from his previous average season highs of 4.5 Tackles in 2015 & 2017 at the Giants.

Smith thrived as an inside midfielder in his first year at the Bombers, his role will likely remain the same in 2019 and as a result similar numbers would be expected.

This choice is more about the opportunity for Clarke to play in 2019, Tom Bellchambers has played in only 75.6% of games in the last 2 years while Shaun McKernan has also been utilised in the Ruck.

Spending up from a rookie Ruck with little to no opportunity to a veteran Ruck could be rewarding if Clarke were to be elevated to the No.1 spot in the right situation, it does save an in-season trade and could result in a small edge against other coaches less willing to do so.

Obviously as the pre-season evolves we will get a clearer grasp on the Ruck situation at Essendon and the chances of Clarke playing in 2019, until then keep him on your watch-list as a possible bench option to start the year.