Prices, positions & tips for the Dockers. 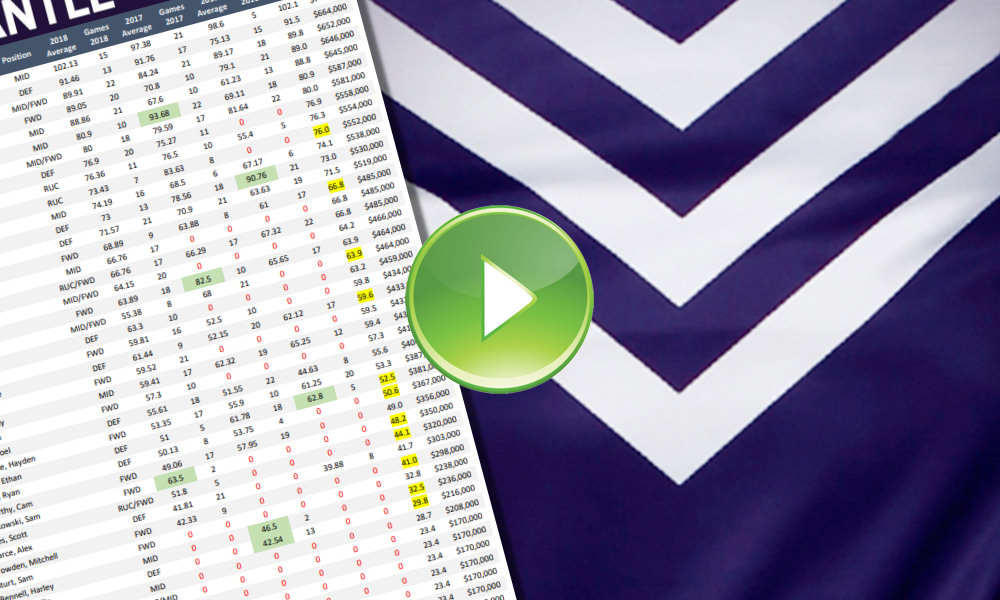 The departure of Lachie Neale has opened up a quality midfield spot at the Dockers, he was one of two players to average more than 25.0 Disposals in 2018 (30.3, Fremantle Rank: 1) along with Nat Fyfe (28.7).

After a pretty decent trade period Fremantle will likely be far more competitive next season, they recorded 9 losses of 50pts or more last season.

A more competitive Fremantle could lead to a very healthy year from Fyfe in 2019, he averaged 126.8pts from winning games & 89.8pts from losing games last season.

There is enough to suggest that rostering Fyfe at his opening salary does provide value, a moderately early season favourable fixture could provide a boost in scoring with a high number of rookies sitting in your team.

Fyfe is a high ceiling high reward type of player, his longevity is questionable but is a must consider if he is healthy at Round 1.

It might be time to shine for Blakely in 2019, he has shown plenty of recent fantasy promise but injuries have hampered his progression having played in 68.2% of games since the beginning of the 2017 H&A season.

“To get him back and fit and at 100 per cent (coming off a knee injury) will help us a lot, whether that’s in the midfield or a half back” Luke Ryan on Connor Blakely in late November.

With the long term injury to Sam Docherty the search for another high scoring defender is on & Blakely is in the mix, he is a definite watch over the pre-season for his role & scoring potential.

Selected at Pick 59 in the 2018 AFL Draft Bewley could make an impact as early as next season, the 23 year old Midfielder averaged 26 Disposals for Williamston (VFL) last season.

Bewley may fit perfectly into the Fremantle team in a wing/half-back role next season, he should be right at the top of your watch-list during the pre-season.