Want to know which players you should be avoiding in your starting squad due to a difficult early draw? Or the Premiums who should be on your mid-year trade radar? Tbetta is here to help with his popular Fixture Study for 2013! 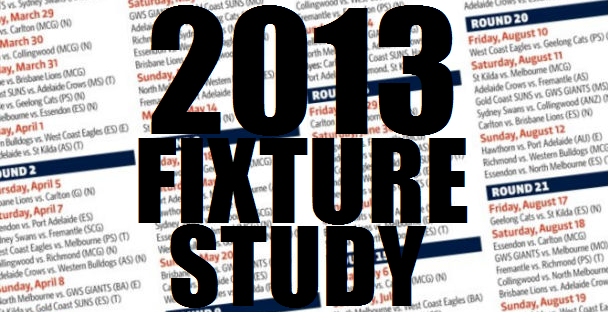 Like last year’s version, the following article is a little long-winded, but it has a lot of interesting information. It’s difficult to visualize  in parts, so I’ve included the Excel file (here: fixture study – 2013) that formed the basis of this fixture study.  I recommend downloading it and checking it out if anything below doesn’t make perfect sense.

There’s plenty of analysis into what makes a favourable fixture for an AFL club. Doubling up against weaker clubs, as many home games as possible, little interstate travel, and as few 6-day breaks as you can manage are the obvious ingredients for perfect draw. But what makes for a great fantasy draw? How can we evaluate the strength of a club’s draft for personal DT gain?

Last year I attempted to quantify a club’s draw difficulty, and the premise is very similar this season. I’ve assigned each club a value, based on their difficulty as an opponent. The assumption is that, generally speaking, the stronger the opponent, the less possessions your team accumulates – which means less DT points.

Last year I used the previous season’s ladder to allocate these points; while this gave us a good idea of what to expect, it failed to take into account changes in personnel and off-season improvement. A perfect example of this is Adelaide, who was assigned a low value even though they showed significant improvement over the NAB Cup. So this year I have ranked each club based on their odds on making the Top 8 (as per sportingbet.com.au) to take into account the perceived improvements of each side since last season, then separating them into tiers before finally allocating a value. It’s important to note that the values are just arbitrary and are intended to be thought of relatively.

I then went through each team’s draw, assigned the values to each opponent, and then summed them to give a Seasonal Value. I simply ranked the teams from lowest to highest, which reflects the ease of a club’s fixture.

The overall fixture table is most useful when considering your ‘Keepers’, and trying to pick between two players that you just can’t otherwise split. For instance, if I couldn’t decide between Andrew Swallow and Patrick Dangerfield (two very similarly-priced midfield improvers this year), one look at their respective fixture strength would swing me towards Danger, given that Adelaide have it easy while North Melbourne have been dealt the toughest draw this season.

It might also turn you off a player when you consider them in isolation. I know personally I’m a huge fan of Boyd and what he delivers in terms of volume and consistency, but the Bulldogs have a very tough draw this season, and along with an expected further decline as a club, I’ve overlooked one of my favourite players.

Hawthorn have a difficult draw every season (due to repeated finals appearances and amount of ‘blockbuster’ matches they attract) so I wouldn’t be too worried about their fantasy fortunes this season, but teams like North Melbourne, Western Bulldogs and St. Kilda are definitely the ones to avoid.

It’s also very useful to consider each club’s draw strength on either side of the Byes. This is a time when we’re going to be doing a lot of donut-dodging trades, but there’s no reason why you can’t improve your side as well.

As you can see, West Coast and Geelong are the finals contenders with very encouraging pre-bye draws, while the rookie-heavy Port Adelaide and value-packed Gold Coast Suns also rate as likely fast starters.

This data is useful for examining both Gun and Rookie selections. Picking Cash-Cows from a team with a favourable pre-bye draw means that they will fatten up considerably more by the time you ideally want to cash them in – the MBRs. Similarly, if you are stuck picking between two guns, for instance Beau Waters or Paul Duffield, you would take the player with the best pre-bye draw, and leave the other for consideration as an upgrade target. Given Fremantle’s tough early fixture and West Coast’s dream start to the year, I know who I’d be going with first up.

Knowing who has the better post-bye draw is just as, if not more, important, because it let’s us know which Premiums we should be keeping on the watch-list during upgrade season, and the players we should be sceptical of if they have a difficult run home.

Basically, any time you trade this year (with 2 every week, that’s a lot of trades), you should be keeping in mind the difficulty of each player’s draw for the time after you’re considering bringing them in. You can rest easy with Melbourne and Brisbane trade targets, because they have dream back 9’s compared to the rest of the league. Fremantle, Carlton and GWS also have a soft finish to the year, so keep your eye on them – especially Premium guys like Murphy, Scotland, Fyfe and Pavlich if you start the year without them.

So, wouldn’t it make sense to trade in players who have had tough starts (and are probably underpriced because of it), but have soft draws to finish the year, where there will be plenty of points of offer? Likewise, doesn’t it makes sense to jump off the rookies who have had that easy start once they’ve (hopefully) peaked in price around the MBR’s, and bring in fresh meat with favourable post-bye draws? How can we quantifythis effect – basically a team’s (and therefore their players’) ‘upgradability’?

To do this, I simply subtracted each clubs’ post-bye value from the pre-bye value, with the more positive value indicating the clubs with the better upgrade targets. The way to read the table to the right is, the more positive the value, to better the team is for upgrading to it’s players. On the flip side, the more negative the value, the better it is for upgrading from players from this team.

From this, we can see that Melbourne, Brisbane, Fremantle and Carlton are the teams whose players we want to be upgrading to. The idea here is that their Guns, having suffered a tough early draw, should be undervalued – especially as they are expected to perform better against weaker opposition after their bye. This concept is given even more weight if you combine it in a trade with one of your starting Cash-Cows from West Coast, Port Adelaide, Geelong and Gold Coast. These Rookies belong to teams who enjoy a cruisy start to the year, so we would expect them to have the opportunity to fatten up more than other Rookies and be hitting their peak price around the MBRs, just before they hit the tough part of their fixtures.

If that’s slightly confusing, let’s look at a real situation with real players, and see if it starts to make sense.

An ideal scenario here would be to identify 2 Rookies from a team with a good pre-bye draw and a Premo-Rookie combo with good post-bye draws, for upgrading purposes. For example, you start the season with Jeager O’Meara (Gold Coast) and Brad Crouch (Adelaide) in the midfield. Then, either in between Rounds 11 and 12 or 12 and 13, you trade them both out at (hopefully close to) their peak price (remember, they both have the R13 bye) and trade in two players who just completed their R11 Bye and have good runs home. This might be, say, Tom Sheridan, a rookie from Fremantle, and a Gun from Brisbane like Jack Redden, who had a tough start but should fly home.

Not only have you taken into account the byes, but you’ve also maximised your return by considering the fixturing and executed a bona-fide double trade.

It’s also interesting to look at each club’s final four games, because this is where you’ll ascertain glory if your priority is League domination. Which teams have that ‘dream run’ that will provide you that extra boost in crunch time?

Once again, Fremantle and Melbourne guns should be firmly on your radar, given their incredible finishes to the year. Sylvia, Grimes, Fyfe, Pavlich, and Duffield will all well and truly be on my mid-year watchlist. The Gold Coast Suns also have a favourable last 4, after a difficult mid-year patch. Should we be considering Broughton or Bock for our finals backline upgrades?

So, what do you think? Will soft or hard draws affect which players you start the year with? Will quirks in the fixturing dictate when you trade a player in, or if at all? Will you be attempting season-long fixture-trading, like bringing in Swans or Saints early with their easy first 4 rounds, before looking elsewhere? Let us know in the comments!