The Weekend Wash-Up – Round 2

Enjoy Matt’s wrap of round two. 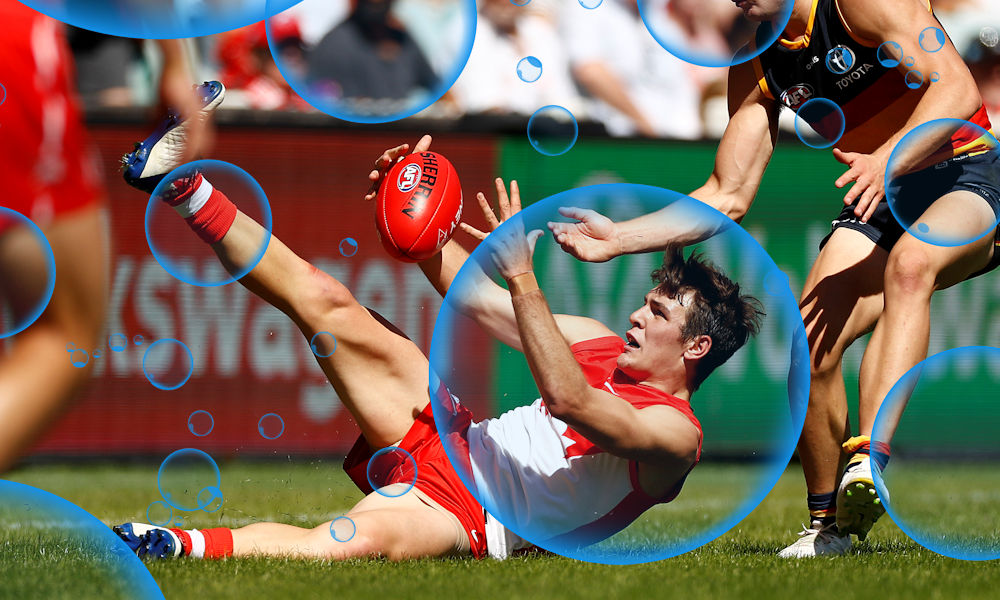 Last week’s most transferred in players set the tone for Round 2. I shouldn’t need to tell you it didn’t go very well. Our midpriced forwards faltered, our midprice defenders faltered, and our midprice midfielders got dropped. It’s time for our Tuesday morning regroup, it’s time for the weekend wash-up.

Grundy (122) – I probably owe Collingwood an apology, but it was more damning on Carlton. The Pies bounced back in a big way, and it was Grundy and Adams (121) who led the way. Hold onto your premiums.

Crisp (117) – Jack Crisp is seeing great run through the middle of the ground and it’s paying off. 36 touches and 7 marks are huge numbers, his role is awesome and he’s a lock to be a top 4 defender. Great pick.

Smith (112) – Tom Phillips took all our attention, but so far Isaac Smith has been the value steal in the forward line we were after. He started slowly but stormed home and looks to be a smokey for the top 6 forwards. Big numbers.

Walker (120) – Ok. Let’s be real now. Tex is obviously loving the open flowing footy, but come on. He’s not going to kick 100 goals this season… I don’t think. Awesome numbers and can certainly average 80+.

Campbell (96) – I had my doubts about Braeden Campbell’s ball winning ability, my nerves were settled with this performance. Lock and load those Sydney rookies on your ground, they are the truth.

Gulden (93) – I shouldn’t have to add much here surely? Hopefully some of our premiums can take a look at Gulden’s tape because this is how you play football. Scary stuff.

Warner (81) – One number that caught my eye over the weekend was Chad Warner attending 17(!) centre bounces. Hello! He was first in behind Parker/JPK/Mills and finished with 20 touches and two goals. Locked into my F6.

Butters (119) – It’s pretty hard for me to see a guy like Jordan De Goey in my team while Zak Butters does what we all thought he would. Absolutely dominate. 36 touches, 6 tackles, 6 clearances and a goal to boot, I will be surprised if he isn’t in the top 6 forwards at seasons end. Gun.

Ridley (109) – Don’t sleep on Jordan Ridley, he has a monopoly on kick-outs and Essendon’s defenders will see plenty of the pill. Reliable.

Billings (122) – I can’t deny Jack Billings early numbers, although I think he remains a draft option only. A rare shining light for St Kilda.

Oliver (130) – Clayton Oliver dominated. What else is new? Tags are a concern, but Oliver is as safe as picks come. I’m not sure we’ll ever get him cheap.

Petracca (124) – Petracca started slowly last week but found his groove in this game. If it wasn’t for 3 frees against and 0.3 behinds, this game could have been even bigger.

Jordon (105) – Shame on me. The writing was on the wall in round 1 that Jordon had to be on my field yet I dropped the ball. It cost me in a big way last week, but at least I have him! Given his basement $170k price tag he’s an early clubhouse leader for fantasy rookie of the year alongside Gulden but that is going to be a close race!

J.Anderson (127) – He won’t have 14 tackles every week, but Jed Anderson was priced at $800k for a reason. Perhaps he still doesn’t get the respect and love he deserves, I guess it’s hard to when you play for North. Gun.

N.Anderson (120) – *Alert* Matt Rowell’s injury has opened up midfield minutes at Gold Coast and it looks like Noah Anderson has every intention of taking full advantage. He was already a breakout candidate, now we could be witnessing it. 35 touches (21 kicks) and 9 marks is absolute fantasy gold. It’s not like he had an outside role either, registering 7 clearances, 13 contested disposals and attending 14 CB’s. The zero tackles can be improved upon and he was a great scorer at junior level. He’s high on my watchlist.

Witts (110) – Bang. Given the fact most ruck options are underperforming (even after a better week) Witts just provides incredible value. Huge tick.

Hardwick (135) – When you play Blake Hardwick in draft for a 135, you know it’s just not going to be your week. One of the great p*sstakes. I’m not batting an eyelid, yet.

Dunkley (117) – My position on Josh Dunkley is starting to shift. I was happy to leave him as he doesn’t have a full time mid role, but god it’s so close to being exactly that. He’s just a fantasy beast and looks on track to average 105+ this season. Awesome pick.

Brayshaw (127) – Unlike his brother, Andrew Brayshaw is backing up his breakout season by taking his game to a whole new level. He’s a serious contender for the top 8 midfielders, I’d have him in there. Epic POD and I’m extremely jealous if you own him. A potential draft winner!

Dow (44) – Now for what you really came here for. You’ll struggle to find a more average footballer than Paddy Dow. He can flash occasional brilliance, like he did when he setup a goal for the Blues early in the first quarter. The only issue is, you won’t see him for another 20 minutes after that. He looks lost out there and he can get lost out of my team. I’ve never seen a player be so good at being invisible while out on the ground. Embarrassing.

Williams (63) – I’m on the fence here. Yes, Zac Williams had a genuine stinker. However he had 10 clearances (!!!) and attended 20 centre bounces, more than Patrick Cripps. The midfield role is there and it could have been a very different story, he can still push his average towards three figures in my opinion. Stay strong.

Neale (51) – The age old concern with Lachie Neale, when the tags come he goes MIA just about every time. How he was allowed to do whatever he pleased last year baffles me, and his Brownlow shows just how important he is to the Lions midfield. The problem is he’s a coward. Two tackles? Barely an effort to fight through the tag? He was basically an extra rookie, only you paid over $900k for him. I’ve seen better value in Fanhub’s pro draft subscription.

Sholl (47) – Swing and a miss for chasing value so far, annoyingly I couldn’t see that game and I would have loved to know how the F**K he managed to run around and not register a single stat for the final 50 minutes of the game. Did he have the same role? Will Adelaide get battered every week (likely)? Concerning, but he’s value enough that an 80 next week eases this pain.

O’Brien (48) – Nothing can ease this pain. I’d rather stick a rod up my urethra than own ROB in any form of fantasy right now. That’s where we’re at.

Jones (12) – Shoutout to Harrison Jones for an early contender of worst performance of the season. I reckon 50% of his owners could have taken the field on Saturday afternoon and scored more than twelve fantasy points. Enjoy the Magoos next week brother.

Caldwell (49) – I usually try to feign frustration when a player I should own but don’t goes down injured. Sorry guys.

Parish (51) – Talk about a double kiss on the d*ck. Not only did I not own Caldwell, I own Darcy Parish who has to be one of the most over hyped footballers in AFL history to date. How long can Bomber fans scream that his role is the issue, not the fact he just sucks at football. Well now’s your chance Darcy, Shiel and Caldwell are out and he should be ‘unleashed’ into the midfield. Unleashed is a strong term. I won’t be holding my breathe, but sadly I’ll be holding Parish for another week.

Brayshaw (45) – Angus Brayshaw. Albert Einstein couldn’t figure out how this bloke has gone from a top 3 finish in the Brownlow medal to a B grade VFL winger. Picked on name alone.

Higgins (31) – One look at Jack Higgins game and it’s not hard to see how the Saints lost. As gutless as performances come. Don’t come Monday.

Brodie (58) – Hands up, this one is on me. Nobody else was dumb enough to pick Will Brodie and rightfully so. I hope he never needs to take daily medication because this bloke couldn’t find the pill if it was right in front of his face. Disgrace.

Stephenson (51) – Another huge L for team points chasing. However I’m not giving up on the pick yet, there’s no doubt he’ll get a good rocket in review and bounce back. Jed Anderson can’t have helped and Ben Cunnington is returning this week, but Jaidyn should still be able to show some ticker on a wing. What a stupid name. Jaidyn. Get Chris Scott onto whoever thought that was a good idea.

McEvoy (45) – Big boy took a step towards retirement with that effort on Sunday. Just keep your fingers crossed that he lasts the season at that rate. Disgusting.

Graham (52) – Massive draft free agent bust. Honestly, who would have possibly wasted a high RFA spot on signing Jack Graham. Not me.

Taranto (86) – I bloody hope that forward DPP is on it’s way, because Taranto showing any resemblance of his former self, much like every single other Giant, looks like a long shot. Dismal.

I had to think long and hard about what sh*ts me this week, as most of what went wrong for me in Round 2 is purely on myself being a certified d**khead. However I have been sitting on the opposite side of things too many times, and it’s absolutely not fair how much of this game is luck based. How does a coach like me get rewarded for making awful decisions while other coaches can make correct calls and get punished for them.

Injuries cripple you in this game, and despite your upbeat positivity during pre-season when you can’t see how your team doesn’t take out the whole competition by over 1000 points, it inevitably comes crashing down through no fault of your own. Just give us a bloody break. And two luxury trades. This game sh*ts me.

1803. Yep. And yet I’m not really complaining, because most of my issues boil down to the fact that I’m apparently brain dead. I have two extra rookies in Parish and Brodie and traded in another named Sholl. Meanwhile I’m not rewarding premiums called James Jordon on my bench. That all changes next week.

I’m pretty set on my starting five rooks. The three Sydney boys in Campbell, Warner and Gulden alongside Jordon and Flynn. Darcy Parish is my only howler pick left, and somehow that might just work out. I’m still happy with my rank at 5000, but from experience Round 3 is when you want your team to be really showing they’re up for it this season. The first couple of rounds are almost pre-season, the real game begins in earnest now.

That ticks off every mid pricer I want in my squad and leaves me with just under $200k to either upgrade Parish, De Goey, Young or Clark next week. If I’m not posting a score over 2000 in Round 3 you’ll be hearing about it loud and clear. I’ll turn from Stuart Dew to Leon Cameron very quickly. Good luck in Round 3!