Inside the Fantasy Numbers – Round 18

Pete is back and goes inside the Fantasy numbers. 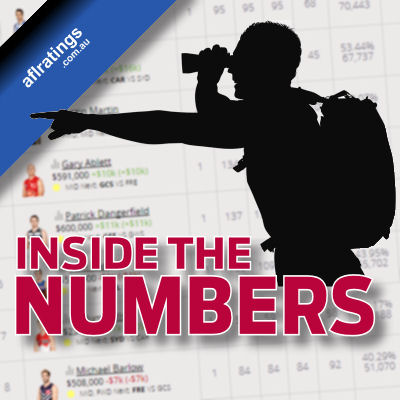 The scramble is on to find extra funds to complete what should be the final few trades in preparation for AFL Fantasy Finals, looking at quite a few highly ranked teams some benches remain thin with very little cash reserves with many wanting an overdraft facility at this time of the year. As a result options are very limiting without a healthy bench and a solid bench to extract cash from, all is not lost if you sit comfortably with the knowledge of playing finals with a solid team structure. For others it is likely a must win game in Round 19 to secure a spot in the finals or even a Top 4 position.

Trading decisions are extremely important this week and game match-ups might provide an insight in to potential short & long term winning moves, the numbers below could deliver comfort in knowing your player/s are in a position to succeed at a time when you need them the most.

Keep an eye on the red and the blue, they are becoming a very fantasy relevant team and even more so under Goodwin next year.

Many will be going to Docherty this week, the Hawks have allowed only 1 team more than 350 Disposals in their last 5 games.

The teams that you need to know that are leaking more points quicker than the Rocky Fantasy Pig Beanies selling out are:

I am in my 6th year of playing AFL

I am a Forward

In the first 4 games to start this year I averaged 106.5pts

Good Luck for Round 19