Which forwards have the writers selected? Read on for some interesting structures. 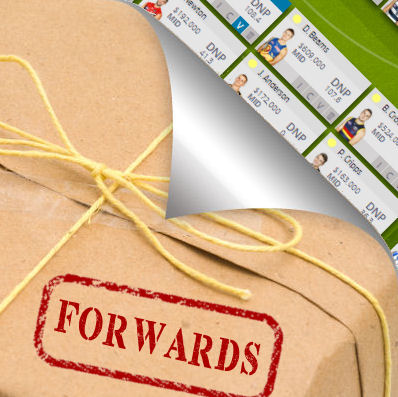 It’s worth remembering; these were the writers teams as of last week. As with all coaches, there will likely be plenty of changes until lockout. In fact, I’d be surprised if they were still the same from the time they were recorded for these articles, to the time you are reading this right now.

So let’s get into in it. Presenting to you, the writers 2015 AFL Fantasy selections in the Forward-line.

If the twelve writers walked into an ice cream shop, most of them would order two scoops of vanilla. When it comes to the forward-lines, it seems their isn’t much room for variety.

Most interestingly, Jimmy Bartel ($562,000) who smashed the NAB Challenge is not in four teams. Unlike dual position player Dane Swan ($531,000) who is in 7 teams, as a forward only, there is no chance he is on another line. Warnie, Crutton, Dunny and McRath have all passed on the former Brownlow winner. Presumable Swan is in the midfield lines of the five other coaches – or Anthony, Chad, Lefty, Matt & McRath need to re-evaluate their team choices.

As for who is spending big; Jeppa has quickly made up for being the skimpiest writer in the backline. With a total spend of $3,022,000 near the main sticks, Jeppa is forking out an average of $377,750 per player and 30.2% of his total salary cap.

And who is trying to save some cash? Warnie. A massive $608,000 less than Jeppa, his forward-line comes in at $2,414,000, or $301,750 per player. Does the rookie expert Jeppa know something Warnie doesn’t? Or has Warnie found some gems that may have been over-looked?

So what do you think? Comment below and let us know who you think has has the best forward set up and why.

TOMORROW: The final writers reveal as we look at the all important engine room – the Midfield.