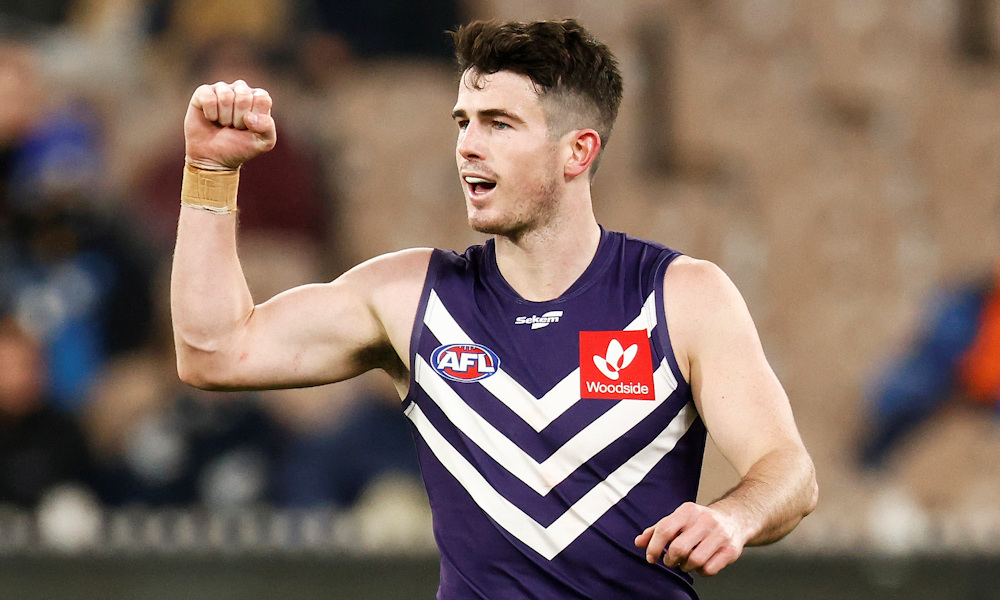 First, I am biased towards Brayshaw due to him being one of four forwards I picked at the start of 2020 who stayed in my side the entire year. He is one of those typical players whose movement from the Fantasy forward line to the midfield line in their first-year results in low ownership, but afterwards we begin to investigate the key question- Can Andrew Brayshaw rise to be an elite fantasy midfielder? And by elite, can he rise to M8. This is the case for his progression,

First, the same as Walsh, he needs to flip his kick to handball ratio: 13.3 kicks to 15.2 handballs.  Even though he averages 28 disposals a game, to lift that above 30 he’ll need to increase his contested possession from an average of 9. This he can do as he spends more time in the guts. Basically, Brayshaw needs to get a bit more of his own ball and kick it more.

The next 2 stats, which currently separates him from the uber midfielders are goals per game and tackles, which he is okay at, but not elite. At 0.4 goals a game compared to say Steele at 0.6 and his tackle average is 4.7 which is a healthy 18 point per game but compared to these M1-8 players he could find improvement. Steele 8.5 (34), Miller 7.1 (29) Oliver 5.4 (22), and whilst some of the uber premiums like Macrae have lower tackle numbers 4.9 (19) they acquire their extra points through sheer volume of disposals. Brayshaw could do this also, but that would mean he would need to average 32-34 disposals a game.  In other words, is Brayshaw more like Steele and Oliver or more like Macrae or Mitchell?

A sign of fantasy piggery from a younger player is their ceiling. In 2021 Brayshaw had scores of 156 v Richmond, 137 v Essendon and 127 v GWS. From those high scoring games, the difference was disposal count and tackling (39 disp and 12 tackles).  This means, like many M8 midfielders they play consistent games around 105 and bang out 3-5 games of 130 and limit their below 100 games. Brayshaw has shown the ability to perform at an elite level. Also look at Fremantle’s draw in the first 6 rounds, Adelaide, St Kilda, Eagles, Giants, Essendon, and Carlton. There is every possibility Brayshaw could begin 115.

Or is Brayshaw more like a whole host of good solid midfielders who are above average at a lot of fantasy stats, but will always sit just below the premiums: like Adams, Duncan, Guthrie, Parker, Boak etc. What limits this pool of players over a long period of time is a combination of injury, they are not the main player, the teams game style (Richmond) or limited secondary position which means their TOG often remains around the low 80’s.

Of those three issues the TOG stat resulting from the lack of a secondary position may curtail Brayshaw the most. Now fantasy coaches know there are some players who play sole midfield role and just rack it up like Mitchell, Miller, and Lyons. But these players often get the easy uncontested plus 6’s. For every Mitchell there are scores of players who score 10 points less a game.

The other issue which we saw a bit in 2021 is, can Brayshaw handle the tag? Now he is transitioning to the main Fremantle mid, and since his clearance game is not awesome nor his contested game, can a tag be affective against him? This is largely speculation, and he might thrive, but I am not willing to speculate on a 104 mid going to 115.  For example, his round 21 score of 64 still had him acquire 25 disposals, but he 17 handballs and gave away 3 free kicks. He attended 22 CBA but only 3 centre clearances.

So, it will be interesting to see, if Brayshaw scores a few above 110 scores in the first few weeks, whether the tag will go to him and what his scoring output will be after. If he handles it well and continues to rack it up, because he is already expensive, he will not have appreciated too massively, and you can get him them.

For me, I only want one Fremantle midfielder and that is Serong. He looks destined to get to 110, but I am willing to have a look first, even though I am biased and want to pick him.