We’ve seen Dunkley outperform his starting price by 20 pts before. A lock? 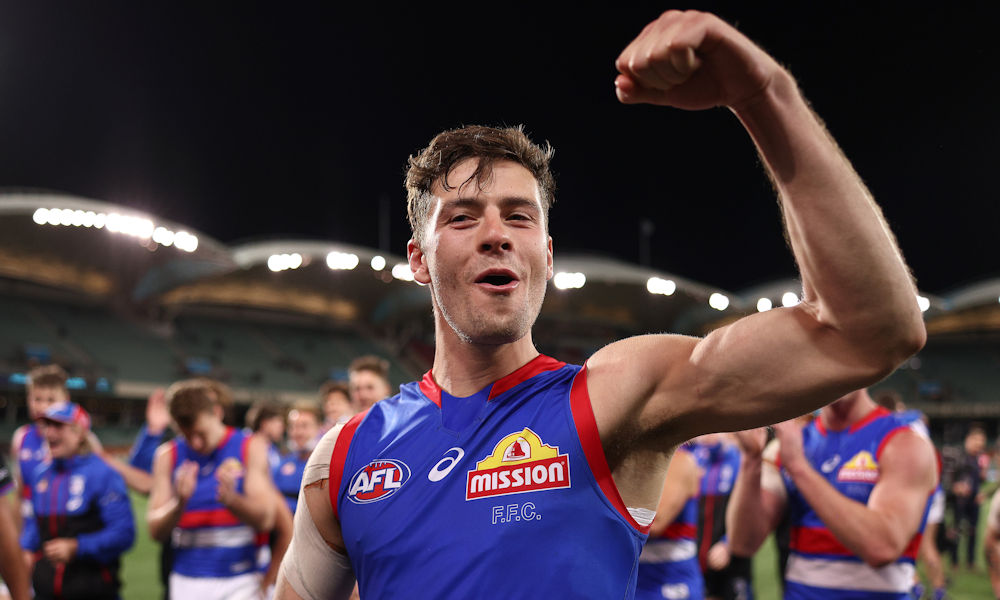 Fantasy coaches are well and truly spoilt for choice this season, with a plethora of elite players available for selection in the forward line. There are few better options upfront than Josh Dunkley of the Western Bulldogs who is available as a MID/FWD in 2022.

Coaches would be hard-pressed to have forgotten his blistering start to the 2021 season, reeling off an impressive average of 118.6 from his opening five games and placing him in the ‘must own’ category for many. This purple patch saw him score over 100 in all five games with a high score of 151 coming in round five over the Gold Coast Suns. Splitting his time between the midfield and forward line worked a treat during this period, where he averaged 30 disposals and 1.2 goals a game. Having seen Dunkley score 20 points higher than his starting price in 2021, I’ve got no doubt in his ability to do it again this season.

One of the only knocks on Dunks within the fantasy community was that he didn’t seem to get the high number of CBAs (Centre Bounce Attendances) often needed to rack up decent fantasy scores, as is often preferred for our premium players. This reduced attendance is understandable given the immense depth in the Western Bulldogs on-ball brigade often resulting in CBAs being shared around a bit more than what they might be at other clubs. In the table below we see that he well and truly debunked this myth and showed that he can score handsomely without spending too much time in the middle. Across his first six games of the 2021 season prior to his shoulder injury layoff, we witnessed Dunkley scoring at a click of 115 per match from an average of only 47% of CBAs per game.

With his nine of his first ten games of the season being in Victoria, everything seems to point towards Dunkley kicking off season 2022 in a rich vein of form likewise to 2021 and outperforming his starting price yet again.

The Western Bulldogs boast one of the premier midfield groups of the competition, with a star-studded lineup led by Marcus Bontempelli that also features Jack Macrae, Adam Treloar, Tom Liberatore, Bailey Smith and Lachie Hunter. With such quality and depth across the middle of the ground, we’ve seen Bulldogs coach Luke Beveridge switch the magnets around more often than we’d like as fantasy coaches. The unpredictability of who will be attending the bulk of the CBAs for the dogs can be a bit of a concern for those wanting to see Dunkley spending more time in the middle.

In round 6 last year we unfortunately saw Dunkley go down with a shoulder injury that required surgery, ruling him out for half of the 2021 campaign. Whilst he still made it back in time for the end of the regular season and the dogs’ finals campaign, it proved to be another instance where he’s failed to play more than 14 games in a season for the fourth time in six years. This lack of consistency is one of the few knocks on Dunkley. With his poor track record of not playing the bulk of home and away games in a season, some coaches may be deterred and instead turn to more durable and consistent options up forward.

Having seen Dunkley go 20 points better than his starting price last season without massive CBA numbers, he’s an ace in the Deck of DT. This season could be one where we see Josh push back towards and potentially past his 110 average that we witnessed in 2019, making him must own as a FWD priced at only 91.5. A preseason fancy who is already owned by 43% of coaches at the time of writing, it’s more of a case of is he your F1/F2/F3 rather than whether he makes your team.