A ball-winning beast at U-18 level, can Tom Powell play enough games to matter in 2021? 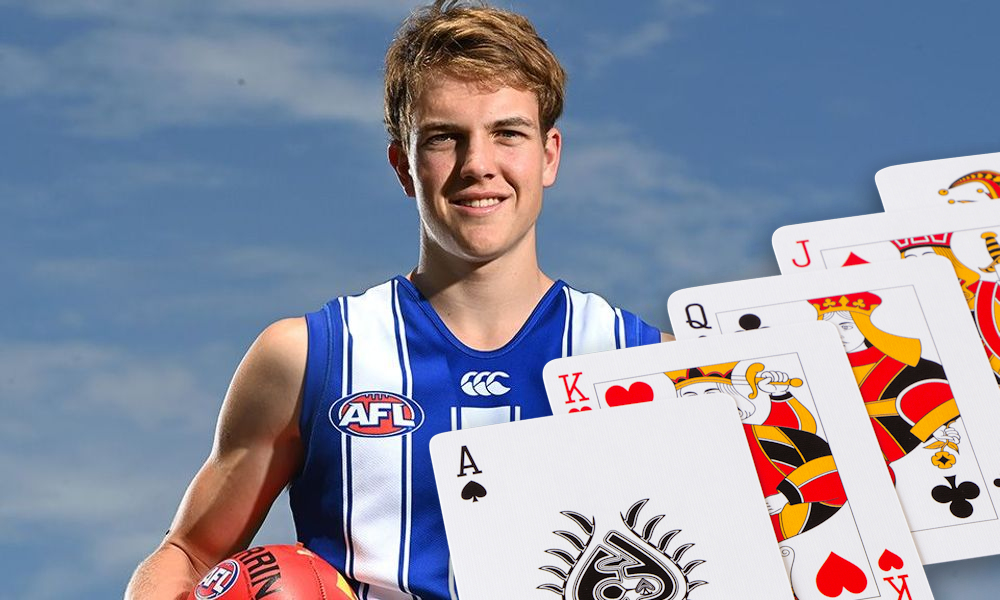 No draftee from 2020 owned better fantasy numbers than Tom Powell, with the Sturt midfielder one of the rare juniors who was able to take to the field last year. Albeit at U-18 level, Powell showed off his outstanding ball-winning ability that led to some comparing him to Tom Mitchell and another former SANFL ball-magnet in Lachie Neale. The winner of the McCallum Tomkins Medal as SA’s best U-18 player, North wasn’t prepared to let Powell slip past their second pick at No. 13 and fantasy coaches are now hoping his dominant numbers as a junior will translate to some mouth-watering rookie scores.

In his 15 games last year, Powell turned plenty of heads en route to becoming an early pick, kicking 11 goals while averaging an astonishing 33.5 disposals and 118.5 fantasy points for Sturt. That mammoth per-game output was fuelled by games like his Round 10 performance against West Adelaide when the midfield maestro gathered 47 touches, 10 clearances and kicked two goals for an insane score of 174 points! Powell didn’t stop there, dropping two more scores of 150+ and finishing with 12 scores in triple figures.

North’s newest on-baller posted 9.3 clearances to go with his high disposal tally, thriving as an inside midfielder with his clean hands at stoppages one trait that scouts were raving about as he entered the draft. Despite providing the inside grunt and clean hands at ground level, Powell still managed to gather his fair share of kicks compared to handballs while running amok. 17.8 kicks vs. 15.7 handballs per game bode well for his potential fantasy ceiling with Powell doing his best work in tight constraints and utilising his footy smarts.

With the Kangaroos undergoing a ton of turnover with both their playing list and coaching structure in the last 12 months, Powell’s place amongst their best 22 is still up the air. That being said, his prolific presence inside the centre square should see North Melbourne unleash him at some point of the year – with the possibility he’ll make their team in the early rounds. When he does get named his previous success means it’s worth paying up to add him into your midfield mix.

The biggest red flag surrounding Tom Powell is linked to his job security. I highlighted yesterday why North Melbourne’s other first-rounder Will Phillips has every chance to slot into the team in the early phases of a new season and there is plenty of competition for spots in the side outside of his draft peer. Powell, who stands at 183cm and 74kgs clearly excels at the coal-face, however, he won’t overtake Ben Cunnington in the depth chart and he doesn’t possess the breakneck speed to impact the game in the same capacity playing an outside role. Luke Davies-Uniacke is another one who could steal games/CBA’s from Powell, with reports out of North’s preseason camp indicating LDU is doing all the right things to finally live up to the hype associated with a No. 4 draft pick.

Even though he dominated the stoppages in 2020, Powell enters the AFL system having played no senior footy – despite being named as an emergency for the Double Blues during the middle portion of the year, only to not make the final cut. While he posted eye-popping numbers against his competition, Powell did so against other teenagers and there are no guarantees he’ll be able to replicate that success against grown men in the pros. There’s every chance he’ll develop into an elite midfielder over time, but given his size and pace, it’s hard to imagine a scenario where he comes right into North’s lineup and averages 20-25 touches a match.

Powell did boast an ownership well over 25% at one point this preseason, but coaches are starting to express caution with that number now back down to 21%. That percentage could keep tumbling when you dig into Powell’s numbers during Sturt’s finals campaign last year, which by no means are awful, but they hardly instil coaches with confidence. In the preliminary final, Powell put up just 18 disposals and went on to chalk up 25 touches in a Grand Final loss. Again, it’s unfair to call them bad performances but both games are well below his averages from the 2020 season, which isn’t a great sign to see him struggle when the lights are shining the brightest.

It was tough to pin down a ranking for Powell, but I settled on a Jack with his 2021 fantasy potential linked to the number of games he plays. When he does line up for the Roos I expect the young gun to put up points in a hurry, but there will also be quiet games on his resume as he acclimates to AFL level footy. With North in a rebuilding phase, there’s every chance he’ll feature heavily in their rotation, but at this point of the preseason, I foresee other players higher on the pecking order than Powell.