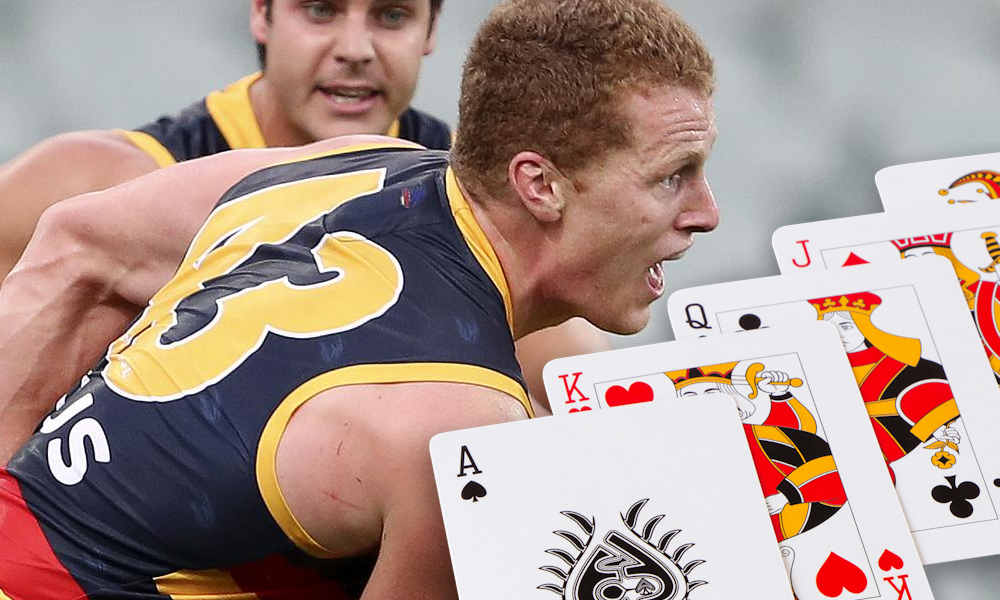 Reilly O’Brien (ROB) has finally given us something to think about when selecting a set-and-forget ruckman. This is going to be a long “why should I pick him?” section, because frankly, there are a lot of reasons to pick him.

For years now it’s been a braindead combination of Grundy and Gawn, and now, at last, we have a ruckman who’s not only worthy of being in the same conversation, but challenging the two ‘G’ big men for the mantle of number 1 ruck. So why should I pick ROB instead of Gawn &/or Grundy?

Gawn has had some durability issues, not just last year, but throughout his career, only playing 2 full seasons out of 9. And Grundy is now in a lineup that features not just Cox (who never really effected Grundy), but Darcy Cameron (and I believe Cameron will feature heavily in 2021) who’ll share ruck duties. ROB has neither of these issues. No issues with durability, having only missed the only the 1 game (was dropped for Sauce who was dominating the SANFL) since he took over from Sauce Jacobs in round 3 2019. No issues with ruck sharing. Sure – they might have someone chop out, but they won’t have a second dedicated ruckman in the lineup like Collingwood are doing with D.Cameron (and Thilthorpe doesn’t count if he gets games as he’s so raw).

Then there’s the price difference, $116k cheaper than Gawn (which allows you to turn a Sloane into a Taranto or a 170k rookie into someone who will actually play), and $39k cheaper than Grundy (which isn’t as significant but still might be the change you need to bump a player up).

He goes into the 2021 campaign as a unique point of difference too. With 10% ownership (at time of writing this article) it’s significantly less than Grundy’s 33% and Gawn’s 14%.

ROB is also only 25 years old. Ruckman generally don’t peak until their late 20’s so you think ROB’s current average at 108 is the cheapest he is going to be this year. ROB’s only played 2 proper AFL seasons now which is remarkable when you think about what he’s already accomplished. Did someone say 3rd year break out (the games he played in 2016 don’t count)!?! There is still so much growth and improvement in a player like this who will want to lead his young teammates from the front. In the 3 years he’s played AFL games his season average has gone; 74, 95.5, 108.1. I think the way the finished the year in 2020 so be a truer reflection of what his potential will be and he has all the attributes to push a 115+ average.

Plus this (Tweet below). Translation; “I’m young, fit and won’t sit on the bench. I’ll kick a snag instead”

Let’s say Gawn remains around his average, and Grundy goes back to his 120 days. Even if ROB were to climb to a 115, when our end goal is to end the year with the best in every line, then in this case 3rd is the 1st last. Or let’s say ROB stays around the 108 mark, then he’s probably still burning you on what Gawn and Grundy are capable of.

Gawn has gone 110+ 3 times and coming off a career high 120+ average and is showing no signs of slowing down. Grundy has gone 120+ on two occasions and comes in 7 points under his previous 2 averages. Both these options are safe as houses to be around the mark of top 2. There’s a lot more uncertainty with ROB, as always, it’s a lot more nerve racking picking a player who’s never done it before. Especially when it’s the ruck we’re dealing with. Other positions are a lot more forgiving if things go pear-shaped.

He share’s that bye round with Gawn, Grundy and popular pick Marshall which takes away the potential of doing the old-fashioned set-and-forget tactic.

Look, I’m scraping the barrel here. There’s not a lot of downside to selecting ROB this year.

I sat on KING for a while, but thought about it, and there is a lot of potential for ROB to be the #1 or at least the #2 ruck in 2021. And in what world is that player not an ACE??? If either Grundy or Gawn had some mid-season hiccup there would be no doubt at all that ROB is now our man and even then, with ROB’s improvement trajectory there’s no reason he couldn’t still push that.

Big fan of what this guy is capable of and he is solely responsible for me owning a 2019 top 100 Fantasy cap. If only Pruess didn’t provide so much value that he selects himself. If I were doing a set-and-forget ruck structure, ROB would be a no-brainer at R2. Now the decision becomes a little more difficult, but I’m happily entertaining the idea.

I don’t think anyone wanting to start with ROB will be disappointed. Set and forget.