We all know there is plenty of value in the ruck department this season, but does that make Nic Nat worth the risk? 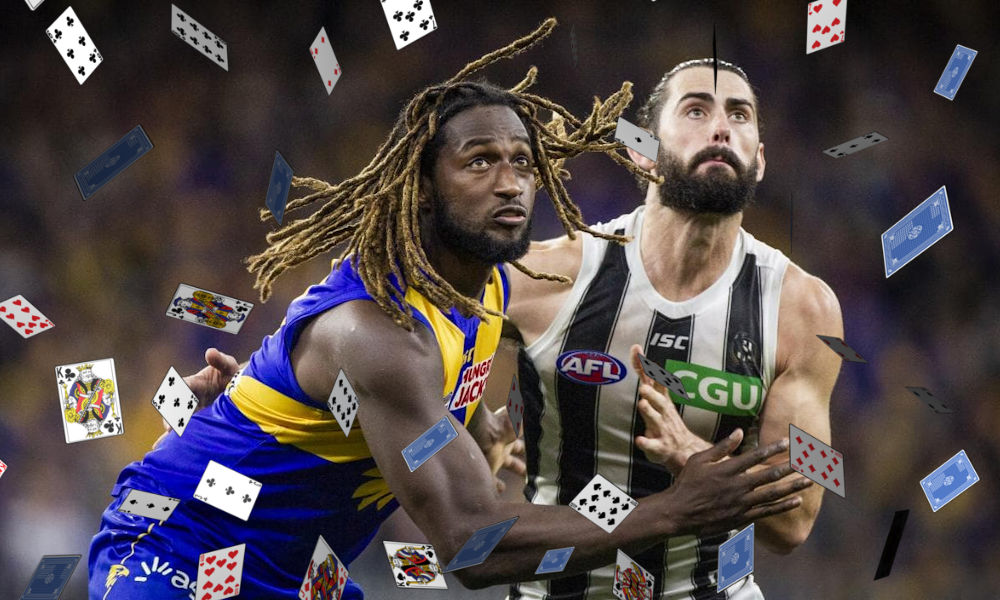 This season the majority of the coaches will slot Brodie Grundy as a set and forget player in one ruck slot, which leaves the fantasy community somewhat spoilt for choice when it comes to addressing R2 needs. Is paying up and pairing Grundy with the second-best ruck from a year ago in Max Gawn the way to go? Does a change of scenery make Sam Jacobs an appealing target? Or should you opt for some serious value by starting with exciting Eagle Nic Naitanui – who seems primed for his best fantasy campaign in years?

Chasing value in the $471K ruckman isn’t a terrible idea with Nic Nat currently the 23rd most expensive RUC in Fantasy Classic. There are obvious concerns with his health, but when he’s on the park, Natanui has shown he can score decently. In three of his last four seasons (excluding 2017 when he missed the entire season), Nic Nat averaged 80+ and there’s no reason why he can’t do that again in 2020.

Natanui amazing clearance work makes him a rare type of fantasy player, capable of doing things that aren’t usually associated with ruckmen. In 2019, the big Eagle led his team in centre clearances averaging 2.8 a game. That number is higher than the likes of Patrick Dangerfield, Trent Cotchin and Dylan Shiel with Brodie Grundy the next highest ruck in centre clearances (2.12 per game). The fact that Natanui gets a decent number of clearances is great, but more importantly, it signals he’s close to the footy a lot of the time.

Wait, there’s more good news! As Nic Nat has progressed in his AFL journey he has adopted a more kick friendly style, rather than sticking the handball heavy habits he displayed earlier in his career. It’s these little differences that separate Natanui from other rucks, leaving the West Coast giant residing on a lot of coaches’ watchlist’s this preseason.

He won’t go gathering 20 possessions every game, but there is a blueprint for fantasy success for Natanui in the upcoming season. The fact that he loves to tackle is a trait that can conveniently help boost his fantasy scoring floor with Nic Nat more than capable of adding enough other points through hitouts, marks and occasionally hitting the scoreboard. Coming at such a low cost, starting with Natanui and watching him burst out of the gates could be a masterstroke for those brave enough to take the punt.

It’s those type of statistics that are the biggest turnoff for possible buyers, because (BREAKING NEWS), you can’t score well in fantasy if you aren’t on the field. It was encouraging to see Natanui return to the Eagles lineup in the latter part of the year and he was significant for West Coast in their two finals a year ago – posting scores of 77 and 96 in two games.

The injury risk with Natanui is real, so that may also lead West Coast to utilise Nic Nat in bursts, much like they did at times to close the 2019 campaign. While that should still see him score well, someone else is going to have to play in the ruck when Natanui is on the pine, or resting up forward. Chasing a ruckman who is splitting time in the middle with a teammate is usually a fantasy death sentence, but there are times where it doesn’t become as much of a factor as we may think – see the 2018 Brodie Grundy/Mason Cox effect.

If Natanui is forced to share ruck duties and appears sporadically in the guts, then a lot of the pluses in starting with him go out the window. Nic Nat failed to play even half the game against Essendon in the finals and managed just 62% game time the following weekend vs. the Cats. Reduced TOG and shared ruck responsibilities are what to look out with Natanui as potential red flags during the Marsh series.

Nic Nat’s situation is a unique one, with the Eagles more hopeful of their star ruckman being healthy in September rather than playing 22 games and emerging as a fantasy factor. While there is plenty of value to be found in the ruck department this year, I do wonder if the pros outweigh the cons for Natanui. Don’t get me wrong, he’ll score well when he’s on the park and my predicted average of 75-80 seems accurate. However, there are no guarantees Nic Nat will play an entire season, let alone 10+ games, making it wise to pass on the Eagles tap specialist and chase another avenue for R2 in my opinion.