For today’s Deck, Roy has a look at the newly appointed Giant Skipper. 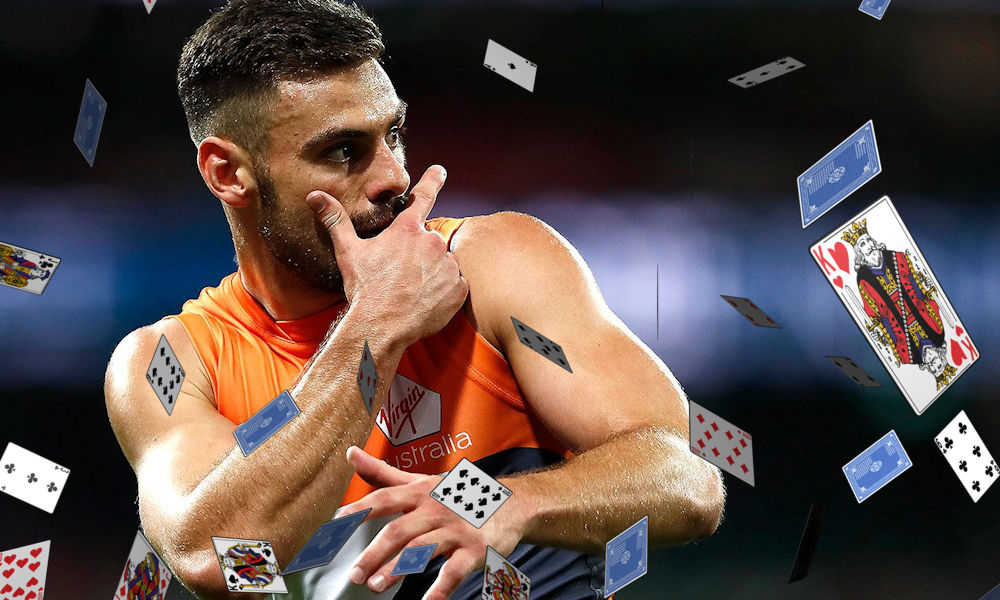 There are many reasons to select Cogs and he sits right up the top of my radar this pre season. The newly crowned skipper is coming off an emotional roller-coaster of a season that culminated in him missing and sub-sequentially watching his teammates get absolutely flogged on the biggest stage and he will be determined to come out and rectify the unfortunate end to the season.

In 2018 he elevated himself to the uber elite category for midfielders with a 110 average for the year from an impressive 21 games. That was convincing enough for me to start season 2019 with him in my lineup and I was instantly rewarded with 161 in round one. He backed that up with four scores of 108 or over in the next five weeks to solidify himself as one of the big dogs.

He has the ability to go big and is a genuine captain option in the right match ups  given his ability to fill the stat sheet across multiple categories. When he is on, he is hard to miss because he is literally everywhere as we saw in his game against the Suns in round 11 where he went full beast mode. In that game he had 36 possessions, 13 marks, eight tackles and three goals for a whopping 192… A ceiling well beyond the capability of almost all of the players in the competition.

He fell just short of making a surprise return from injury for the grand final which leaves him in a great position to be firing in round one.

On the back of an impressive effort in round 16 where he had 34 touches, six marks and 11 tackles for 146 before ending the game with a knee complaint, he pushed though to play in round 17 but unfortunately ended his season before troubling the scorers. The only positive out of this is he is now around seven points under priced. Absolute bargain for a premo.

The biggest reason you would avoid Cogs is his lack of durability. When you pay big bucks for your franchise mids, you would at least like to think they are a chance of fronting up every week. That is a scenario you can almost put a line through here as he has never played 22 games in a season during his eight year career.

The Giants midfield is stacked with talent and to this point, we have rarely seen them on the park together. So the question needs to be asked, does someone suffer when Cogs, Kelly, Whitfield and Taranto are all playing? Or can they be like the old school Cats and Pies where they just go Globetrotter mode and all dominate? An issue for Coniglio in this scenario he is a highly respectable forward, kicking two bags of three and one of four during the year which can lead to him spending extended periods there.

He can be susceptible to a hard tag, as we saw in his game against the Eagles in round two where Hutchings clamped him to 20 possessions, no marks and he laid no tackles for just 50.

Cogs is a walk-up start for me this year. To be able to select one of the genuine stars of the competition for well below the price tag he deserves takes the choice aspect out of it. With his ceiling, and the way the Giants are projected to perform in 2020 it would come as no surprise if he returns a career high average in the 115 range. The durability is a concern, but we have the trades there to use and if you are going to risk it, you might as well do it with a guy who can go 190.

FOLLOW US  ON TWITTER: @RoyDT for all thing AFL Fantasy (and more). Got something to say about the deck? Use the hashtag… #DeckofDT.