Ricontop runs the numbers of the top 100 Fantasy Classic coaches. 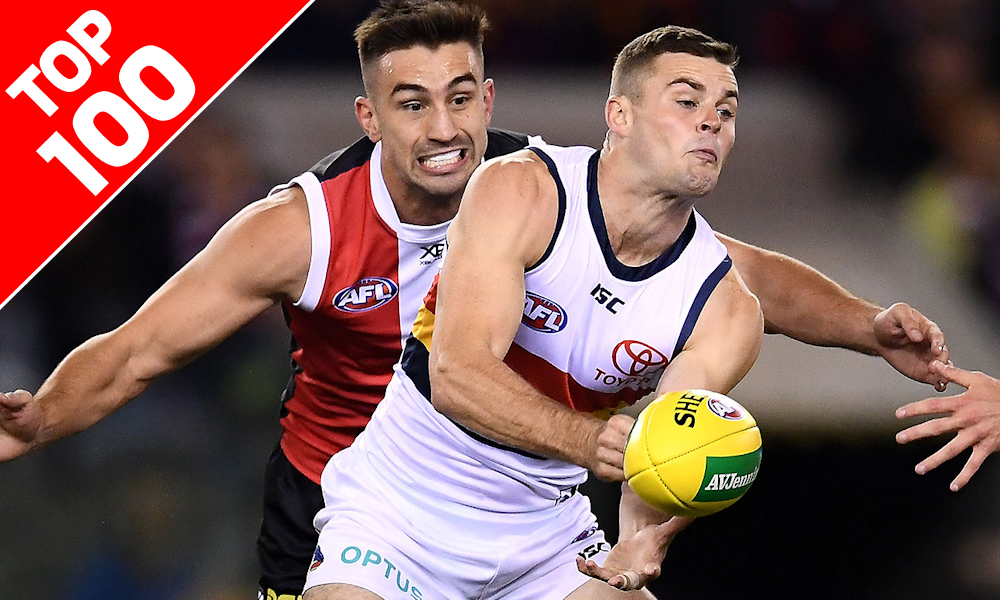 Week nine completed and what a ride it has been for many AFL Fantasy coaches.  If you have dodged under-performing premiums, forced injury trades, late outs, and not forgetting “Dramafield” then consider yourself lucky.  As we start to enter the bye rounds, we all need to think carefully about the trades that we select from now until the end of the byes. After nine weeks of data, we can start to analyse the elite coaches that form the top 100 in AFL Fantasy.

The following data and information will focus on the most selected players in the top 100 AFL Fantasy coaches.  I have filtered the statistics below to count only the players that are “on-field” and hence bench players are not counted. I will also attach a copy of the full summary of the data in a PDF format for your complete reference. So again, this year I ask, “How do I compare with the top 100 AFL Fantasy Coaches?”.  My team has 16/22 of the vanilla selection as per listed below.

These six players represent the most common premium defenders in the top 100. In summary only 2 of the 6 defenders are premiums. In contrast, the top 6 averaging defenders consist of Whitfield (123), Lloyd (110), Hurn (103), Houli (100), Stewart (99), and Laird (97). If you are trying to catch the top 100 or trying to move up the ranking within this elite group, the defence is the line that you want to attack. Although rookie players such as Hore, Stack and even Durrsma and mid-pricers such as Smith and Williams have been more than serviceable in the defensive line, upgrading to the top 6 averaging defenders will provide you with an advantage over the others.

There are a number of coaches in the top 100 (65) that will be looking to offload Williams this week, the obvious choice will be to upgrade him to Whitfield long term, but I’m with The Traders in saying that this week, Melbourne will be playing close attention to him.

It will be interesting to see how many of the top 100 will keep Walsh this week and even leading into the bye rounds.  There is no doubt that he has reached his peak price but he will be a handy player during the byes. If you are looking for an anomaly, Merrett is an interesting unique overall, but is highly owned in the top 100.  Obviously, M. Crouch’s top 100 numbers has decreased because of his injury, only 1 coach in the top 100 owns him.

Don’t get me going about Brayshaw, role change, bad form whatever it is, his percentage ownership in the top 100 continues to decline at a great rate, a similar analysis can be said about Liba. If you are looking at the unique pick, Duncan’s top 100 numbers are very interesting.  Word of warning, I selected Duncan last week and my picks have been riddled with bad luck.  You have been warned!

This time last year, the most selected Rucks by the top 100 coaches were Gawn and Martin.  This year, Grundy is the stand out ruck and Gawn as his second. As a non-owner, I turn off the TV when Grundy goes on his Tom Mitchell like mode of running around getting his +6 everywhere, it makes me sick.  A surprise packet this year is definitely windscreen O’Brien, how good has he been?  He has got an 85 average since taking over the ruck duties from Jacobs. There are 15 coaches that are rucking with him as their R2.

These six players represent the most common premium forwards in the top 100 teams. This time last year, we are praising the likes of D. Smith, McLean, Westhoff and Heeney. Although there are still familiar names such as Danger and Dunkley, it’s the DPP players such as Kelly and Boak that are the big surprises. If you are trying to predict the top 6 forwards at the seasons end, goodluck. Apart from Boak, which has been the best option forward this year, picking a consistent player in this line is like predicting who Luke Beverage will ruin in AFL Fantasy on any given week.  To those that have brought in Dunkley this week, welcome to the club. Dunkley’s top 100 ownership ballooned from 1% from weeks 3 to 7% to 42% last week (week 9).

Finally, if you are looking at unique players, Ziebell and Martin are both ripe for the picking.  Jack Ziebell currently priced at $589k and D. Martin at $591k both have the round 14 bye.  If there is any time to take this risk and bring these two players in, it is right now and during the byes.

If you want a copy of the full analysis in a PDF format. Download a copy here.

Gold Coast Players Have Potentially Been Overlooked by Fantasy Managers This Season
How do you Compare to the Top 100 AFL Fantasy Coaches?