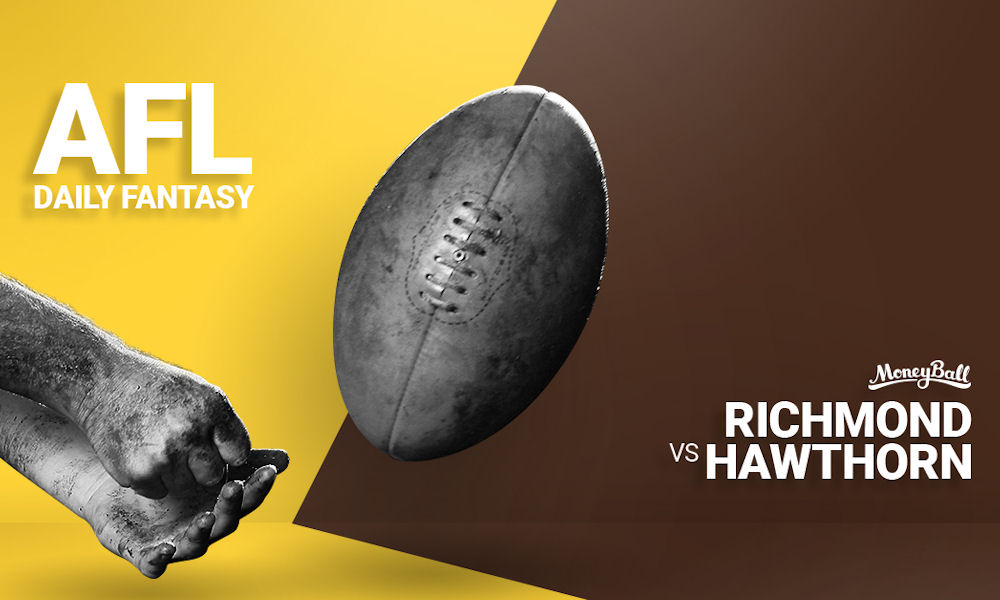 The impending rainfall at the MCG definitely needs to come into consideration when building your lineups – something cheeky like double-RUC lineups are doable on their day, but this isn’t one of them. Speaking of the ruckmen, Toby Nankervis ($8,000 RU) almost becomes a must-pick, as he’ll be riding solo while Ceglar and McEvoy cockblock each other all night. He’s also a better ground-level ruckman, averaging 5 more touches than McEvoy per game with a greater ceiling on his tackling numbers, hitting 7+ tackling counts on 10 occasions already in his short career.

Of course, the rainfall also makes it difficult to chase players who rely on high marking numbers to generate their scoring. Jack Riewoldt will find it difficult to clunk his regular 8 per game, while tempo-setting defenders like Bachar Houli ($7,000 DEF) and Nick Vlastuin ($6,300 DEF) will need to add more to their game than their normal bounty of +6 combos to reach value. Likewise, the various Hawthorn KPP’s all drop down the priority list, while someone like Ricky Henderson ($7,800 MID) isunlikely to match his 86 ppg over the last 7 weeks, as collecting his standard 7 marks will be a tall order on a dewy Thursday night.

Richmond games make for an interesting study, especially as a basic strategy of DFS is to stack the winning team and profit. This doesn’t seem to apply to the Tigers, who’ve defied modern footy trends by finishing top of the table with only one player topping a 90 AF average over the season. Despite their success, the reigning Premiers simply lack the firepower to fill out a stack, as they could legitimately win this game by 50 points and not notch a single ton. In my opinion – especially in the MID’s – you can safely dip into the pool of more modern/accumulative Hawthorn options, regardless of whether you think Richmond will perform in line with their $1.37 favouritism with the bookies.

There is a severe lack of ceiling in this contest, which is why I think Titch is a must-have on a slate without a lot of oomph. The most damning stat is this: while Tom Mitchell has notched 14 scores of 120 or higher this season, the entire Richmond Football Club has only managed 9 combined. Can you win it without him? If he pumps out another casual 148 as he did against the Tigers earlier this year, I doubt it.

$8,300 is a lot to pay for a bloke with a highly punchable pill who boasts only 2 tons from his past 16 games, and that’s on a dry day. Riewoldt’s price is inflated due to a couple of belters this year: the 136 AF from 16 marks and the 192 from a casual 10 sausage rolls. Neither is happening this week in a wet-weather Final, so you should spend your cash more intelligently elsewhere.

Worpel shapes as a must-pick here as the only guy under $6k that’s a lock for 80 in this game, and the eye test suggests he’s the kind of unit that’ll relish the inside contest that comes with wet weather games (and finals in general). The Worpedo has thrown together scores of 76, 105, 94, and 75 over the last month as he maximises his newly-found midfield time, to this point where he’s actually averaging the 2nd-most touches for the Hawks over the past 3 weeks at 25 per game. I’ll buy a Port Adelaide membership if he’s not at least 80% owned here.

Cotchin is symptomatic of Richmond’s strangulation style of ball control, joining Prestia ($7,700), Lambert ($7,600), Caddy ($7,200), Grigg ($7,100) and Edwards ($6,200) in what must be one of the most statistically lacklustre midfields going around. They simply don’t over-possess the footy, which is why Cotchin hasn’t even reached 20 touches in any of his past 6 outings. In fact, 5 of last 6 scores didn’t even make it as far as a paltry 70. Obviously you’d be thick to pick him, and my suggestion is to go cheap or pick up a more traditional accumulator from Hawthorn with your precious MID slots.