Steven Edwards is currently doing a PhD in mathematics and he has applied his skills to Fantasy footy to determine the best team possible. 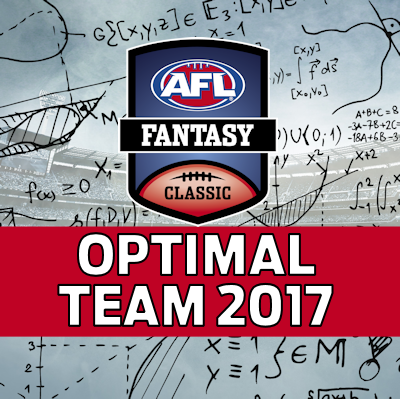 For centuries psychologists have studied the link between creative genius and people who the rest of society consider a little insane. Many brilliant people throughout history have fit both descriptions, such as famous painter Vincent Van Gogh and pioneering physicist and inventor Nicholas Tesla. Today, we are happy to provide the final piece of evidence that was required to prove this highly debated link, the Optimal AFL Fantasy Team of 2017.

With a total score of 60,551, an incredible 9,659 points more than the competition winner, Selby Lee-Steere’s Moreira’s Magic, you would have to be insane to have selected this side. Amazingly, this ‘dream team’ has an average score of 2,633 points per round (Moreira’s Magic averaged 2213) with a noteworthy score of 2,949 points in round 22.

The starting squad blatantly disregards the generally accepted Guns-and-Rookies strategy. A total of fourteen players were selected in the initial team with a starting price of $200-500k. In fact, out of the 35 top-priced players at the start of the season across the four positions, only 4 were selected: Taylor Adams, Rory Laird, Zachary Merrett and Tom Rockliff.

While the rest of us were looking for rookies as trade down targets, the optimal team focussed on sideways trading. Crazy. In fact, not once was a rookie traded into the team throughout the season. The cheapest player traded in was Luke Ryan in round 19 at a price of $306,000.

Throughout the season a total of 17 different captains were used. This on its own is remarkable but not completely surprising. We could all have done a lot better if we could choose the captain at the end of the round, not the start. What is surprising is that out of these 17 captains, Patrick Dangerfield was not made captain once. This is conclusive evidence that there is no such thing as a set-and-forget captain.

As most of us already know, the second substitute position in the ruck is somewhat unnecessary. The optimal team exploits this by selecting backup Richmond ruck, Ivan Soldo, who sat in the squad without ever being selected in the starting team until he was traded out in round 12.

The final sign of utter madness is that the team finishes with a whopping $1,254,000 unused in the remaining budget. Talk about restraint. What makes this possible is the ludicrous finishing team value of $16,758,000 (the highest valued team was “the toecutters” with $15,249,000). Apparently it is possible to reach a point where budget is no longer important.

At the end of the day this is a team that is essentially impossible to have chosen during the season. However there is a certain beauty in its craziness.

So next year, when you are thinking about making a move that everyone else is calling crazy, remember what Aristotle said (more or less) – “No great [AFL Fantasy Team] has ever existed without a touch of madness”.

Scores, team value, salary cap remaining, captain and every trade for the 23 rounds of footy.

Huge thanks to Steven Edwards for his incredible research. We are keen to hear from our readers with any observations from this awesome data.

Matthew Boyd was traded in for the Grand Final.