Footy is back, and so is Moneyball! Jump inside for this Thursday’s top DFS tips from the guy on the front lines. 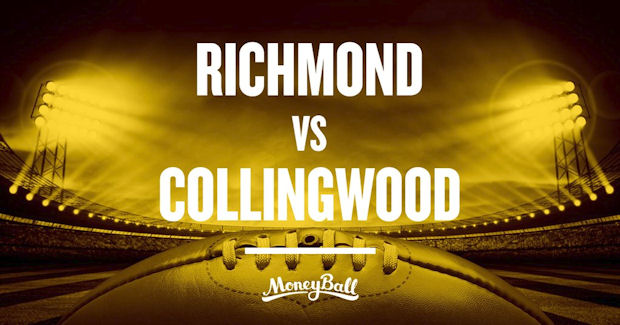 Last Thursday, Richmond smashed Carlton yet conceded 4 big tons to the blokes in the engine room. The mind only boggles with what could happen if they lose to a Collingwood squad that recorded the 2nd most disposals of any team in Round 1! I’d be looking to stack your team with Collingwood players wherever possible in the $5,000 Tigers vs Magpies Special, and taking calculated stabs at value Tigers to round out your squad.

With Mason Cox omitted, Brodie Grundy ($9,400 RU) receives a massive shot of adrenaline to his statistical jugular. Despite still averaging a respectable 91 points with the American Pie in the side, Grundy went Super Saiyan regularly in his absence, scoring an extra 21 points per game as a lone wolf. Close to a must-have this week.

Will Hoskin-Elliot ($3,800 FWD) predictably holds his spot after a timely 95 Moneyball points last Friday, collecting 22 disposals to go with his 8 marks. While he won’t soar into that kind of stratosphere each week, WHE’s an excellent low-risk play in a tough forward line slate this week.

Given that we’re looking at loading up on hot Pies, it’s tough to ignore the backline structure at Collingwood that breathes life into role players such as Jackson Ramsay ($5,700 DEF) and Brayden Maynard ($6,100 DEF). They’re solid picks on a standard day, but boast high ceilings if the tempo suits their quarterback styles for large portions of the match.

Speaking of quarterbacking, Reece Conca ($5,800 MID) has turned to a defensive post in a bid to jumpstart his career – and surprisingly, it’s returning dividends. He’s coming off scores of 90 and 84 and I wouldn’t be surprised to see him feature again in the high-disposal clown fiesta we expect to see on Thursday evening.

Sticking with the easy footy theme, Tom Phillips ($6,200 MID) is a genuine explorer on the footy field, earning plenty of touches in return for the extra kilometres he gets in the legs. His promising JLT form translated into Round 1 fantasy success and I see no reason for that to stop against a Richmond side that likes to trade midfield punches rather than locking opponents into a sloppy stalemate.

Toby Nankervis ($5,700 RUC) has been our pre-season Moneyball darling and there’s no reason to stop flogging this horse while his price has so much life left in it. Feel free to pick him in the ruck to save cash, but stashing him in the FLEX slot is just as effective – especially given that a the structurally similar Kreuzer/Nankervis combo would have netted you 203 Moneyball points last Thursday.

Of course, now’s where you look to spend up on the big dogs. Pendlebury, Adams, Treloar, Sidebottom, Cotchin, Martin – there’s no shortage of superstars in this clash, it just comes down to picking the right combo… So good luck with that, you’re on your own with that one!