Antonio Brown. How can you not love him? If he’s not booting the opposition punter in the face he’s doing front-flips into the end zone and drop-bear-ing off the goal post. Love him even more when he’s in our team and scoring like the weekend. Find out who else to chuck in your team this week. 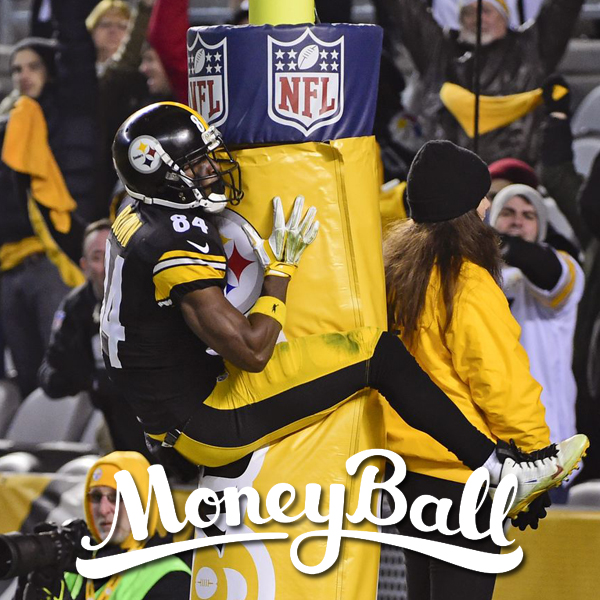 Week 14 already. Time flies when you’re having fun. Just a month of regular season games to go. In season-long leagues the finals will be starting this week or next, so if you didn’t make the finals, you don’t have to feel left out, there’s always a daily comp for you to jump into.

Tyrod Taylor (Buffalo, $7900)
Scored over 20 points in his last two, mainly because of Watkins getting his hands on the ball. Philadelphia have been giving up a lot of fantasy points through the air.

Alex Smith (Kansas City, $7400)
Shares many similarities to Taylor, above. Scored over 20 points in his last two (because Maclin). Plus San Diego have been giving up fantasy points.

Johnny Manziel (Cleveland, $5500)
Is said to get the start this week, pending on him not going on a bender before his game. Cheap and playing the 49ers.

Javorius (Buck) Allen (Baltimore, $5800)
Faces Seattle this week, but might be a great contrary play considering he had over 100 receiving yards on 12 receptions last week.

David Johnson (Arizona, $5200)
Showed what he can do last week when given the lead dog duties. Keep an eye on whether Ellington plays. Johnson may get benched if he has fumbling problems.

Shaun Draughn (San Francisco, $5100)
Scored a TD against Chicago last week and shouldn’t have any issues finding the end zone agains versus Cleveland.

Brian Hartline (Cleveland, $4500)
Has been getting the receptions and the yardage recently, just needs a TD, which is doable this week.

Dorial Green-Beckham (Tennessee, $4500)
Had his breakout game last week and hopefully it’s a start of things to come for the highly-touted rookie.

Austin Seferian-Jenkins (Tampa Bay, $4900)
This will be his second game back from an injury lay-off and the Saints allow the most points on average to TEs.

Scott Chandler (New England, $4500)
Homebrand Gronk is still basement priced, and has scored around 14 in his last two.

Green Bay ($4700)
At home versus Dallas who are top-5 for giving up points against defences.

Miami ($4500)
Facing Eli Manning who is a bit banged up, so they might be a chance to repeat last week’s effort.

Dan Bailey (Dallas, $4800)
Playing the Packers so they might have to lean on him again this week.