This year the DT Talk writers reveal their teams, line by line. Today it’s the rucks. 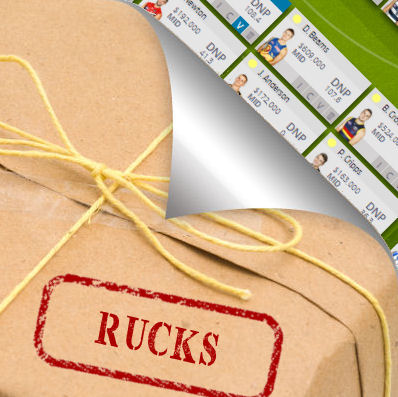 So let’s get into in it. Presenting to you, the writers 2015 AFL Fantasy selections in the Ruck Department.

It’s clear that going cheap in the ruck department is the order of business for most of our writers this year. Matthew Leuenberger ($277,000) is the most selected ruck amongst our writers with eight selections, closely followed by Jason Holmes ($120,000) with seven selections. Tom Bellchambers ($281,000) is next with six selections. Sydney ruck in waiting Sam Naismith ($165,000) has four selections. Amazingly, only one writer has starting ruckmen who are both priced more than $300,000.

What can we learn from this? Well, most of the writers are cutting corners and steering away from the traditional Set & Forget ruck strategy to spend money in other areas. But what if, Matthew Leuenberger (for example), gets injured early in the season? Is there enough money in the bank to trade out of trouble?

It also shows there is no unanimous stand out rookie ruckman who will deliver. Jason Holmes is leading the way with one and a half games in the NAB Challenge for scores of 31 (v. Essendon) and 12 (v. Brisbane), but he needs to average 21 just to avoid going backwards in price – he’s averaged 21.5.

So what do you think? Comment below and let us know who you think has has the best ruck set up and why.

TOMORROW: The writers reveal their defenders.