Over the last few years, I’ve posted ‘my’ pre-NAB Challenge team. This year is no different, however do I love this team? Certainly not. I can’t say I’m even sold on the structure. Anyway, here’s something to look at before the four weekends of pre-season games start. 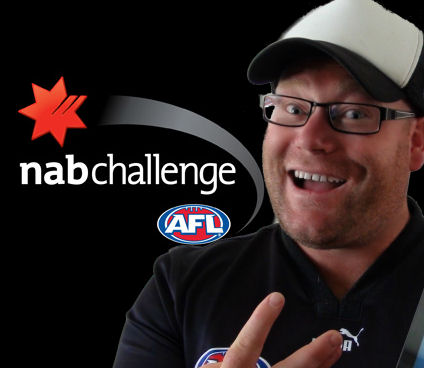 Like most reading this, I’ve spent the last month or so playing with my AFL Fantasy Classic team. My study started pretty much as soon as the siren went on the Grand Final back in September. Through the Deck of DT, different players made their way in and out of my squad.

The NAB Challenge starts on Thursday night down here in Launceston as the Hawks take on the Magpies. So on this last footy-free Sunday for quite some time, I’m putting my team out there for all to see.

Of all of the years that I’ve been posting a pre-NAB team (I think this is the fifth one), this year I’m far from sold on almost any of it. From players to structure to everything in-between. I’m not sure if it’s the challenging pricing and therefore lack of premiums or the putrid defence options this year or what? Anyway here is what the mighty Warne Dawgs look like on the 22nd February, 2015. Take out of it what you will and feel free to smash it in the comments… there’s minimal chance that these 30 players will be there come the first lockout on April 2, but a fair chunk of them will.

Let’s have a look at why I made some of the decisions I have, beginning with the midfield.

I have been an advocate for NOT starting with Tom Rockliff due to his price. He will drop in price, that’s a given, but from what I learnt last year with the new weekly price changes, the price changes aren’t as harsh as they have been in the past. I’m still tipping Rocky to average 125 or so and realistically, to bring him in as an upgrade could happen later rather than sooner. There is still part of me to use mid-pricers to get him in a bit later. Gary Ablett is a given but I’m giving some young-blood a chance to be starters. Toby Greene and Brad Crouch are massive chances to make that top 8 midfielders by the end of the season and if they don’t they offer enough value as I think they’ll be there or thereabouts.

The final four MID spots are very cheap. Daniel Rich is a must have IMO and I’m starting with three on-field rookie priced players. The guys I have there I’m as confident on as I could be at this stage of the pre-season.

With Matthew Kreuzer looking unlikely to suit up in round one, I’ve gone with the set and forget Sam Jacobs in R1. Matthew Leuenberger sits in at R2. I’m not completely sold on his scoring with Stefan Martin being such a beast last year, but he’s still cheap enough to have there. Along with many coaches, I’m throwing the bench but using Mason Cox as a RUC/FWD swingman. ASADA pending, Tom Bellchambers is in my forward line due to the value he offers as the #1 ruckman at the Bombers. I think I talked myself into having this structure when writing my Deck of DT article. But if the players are suspended before the start of the season, this obviously won’t be happening and I’ll look for a completely different ruck structure. Maybe Nic Naitanui gets a run instead of Sauce?

FWD/MIDs Dustin Martin, Brendon Goddard and Dane Swan will almost certainly be in my round one squad. Their popularity is huge within the community – and for good reason. These three could possibly be the top three scoring forwards this year. Tom Mitchell gets a gig as a potential premium. If given the opportunity, he’s a pretty safe bet to make some cash and average around the 90 mark. Mitch Clark, Tim Membrey and Jesse Hogan may stay in the squad from F6-F8.

Oh… the back line. I feel I have over-spent a little here. I had to include my boy Hibbo. Michael Hibberd is as consistent as they come. Brodie Smith and Jack Newnes are keepers at this stage. They won’t be getting any cheaper than their starting price. Garrick Ibbotson and Brendon Whitecross are there, but their positions on the ground aren’t locked at all. Beau Waters was sitting there without too much thought, but due to retirement, he was omitted in the last week.

This team has $18,000 left in the bank. I would have liked to have left a few more dollars as those early trades in this world of two trades per week should be used aggressively. This year is very challenging and I can definitely see a heap changing when the NAB Challenge starts. I’ll be changing my team around heaps… probably quarter-by-quarter for any game I watch.

Who knows what will happen when/if the ASADA penalties are handed down. We’ll have some commentary on fantasy implications coming soon, but my gut feel is that top-ups should be added to the competition if they’re playing more than a month or so, however their prices should attract a top-up premium. Monty blogged about it on FanFooty and I agree with some of his points but it’s going to be ‘part of the game’ this year. We didn’t go overboard with GWS or Suns players when they came into the comp. So much of this depends on length of suspension, so I won’t speculate too much now.

Alrighty – have a happy NAB Challenge kick-off week! Be sure to listen to our podcast on Monday evening or catch it live from 6pm on www.cityparkradio.com.