Warnie tried to give some basic free-hit strategy, but Tim Spear has jumped on his computer and given us this comprehensive article on managing your AFL Fantasy team through round one. 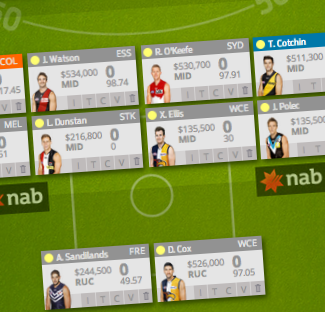 Whether you like it or not, the boys at FanHub have introduced the Round One “Free Hit” for AFL Fantasy this year. It means the casual fan can avoid the confusion of the split first round and partial lockouts, andreset the pieces of their shattered Darren Glass-filled sides (I honestly had to look up whether or not he was still playing…that could have been embarrassing). However, it also serves as an opportunity for the hardcore fantasy players – basically the ones reading articles like this – to conduct some deep research into the strategy of a erasable team. Out of the goodness of my footy-obsessed heart and in lieu of more pressing engagements, I would like to share with you some of my findings.

(All stats are from our good friends at dream-stats.com and footywire.com)

Go cheap on your bench. The aim of the game in Round 1 is to maximise the value on your field according to fixture strength, a player/team’s history against the club, and their potential to break out with a positional change (always happens in the first rounds – Westhoff…). So, it makes sense to spend as little as you can on your bench, especially since there should be some guys at $115k who might play anyway – more on them later.

The rolling lockout is also important when you consider the rookies to put on your field. Pick the guys who should be good regardless of fixture (McDonald, Tyson, Polec etc.) but then look out for the vest candidates to avoid. Be vigilant in checking the starting 18s and, with the shortlist of rookies I’m sure you all have, pick the ones who pop up as starting before each game. Picking for opposition should be secondary to job security (or vest security).

I’ll go through the “safeties”, the “uniques” and the rookies that I like the most, followed by a sample “free hit” team. The “safeties” and the “uniques” will mostly have their average from their last four games against that opponent next to them. No narrative, straight stats.

Traverse the mountain of stats and glean what you will. Happy Hunting.