Mark has submitted us an article about traded players outputs v expectations over the first 9 rounds. He has grabbed the top 10 most traded players from Round 2 through to Round 9, mapped their first output the week they were traded in, and compared that against their average at the time of trading. 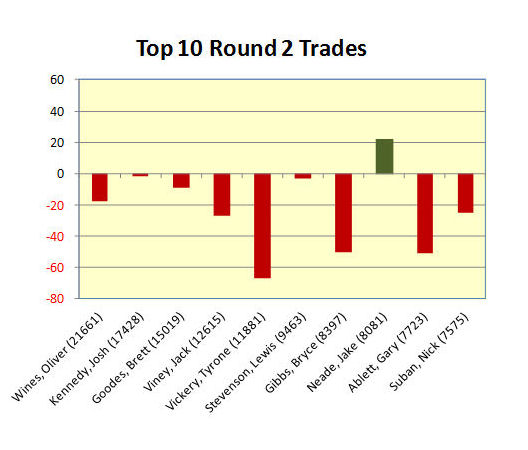 Ever felt that every trade you make fails?  That gun player you bring in or that over, even averagely, performing rookie fails the week he comes on board? Well, rest easy, you are not alone.  After coming to similar conclusions myself, I decided to look at the statistics.  Below is what I came up with.  I have grabbed the top 10 most traded players from Round 2 through to Round 9, mapped their first output the week they were traded in, and compared that against their average at the time of trading. What came out was quite astounding (number in brackets represents the number of coaches that traded that player in that week).

Now, not all of your trades will be in the above, but I bet if you read this site a fair few of them will be. But what does this mean? Basically two things, a lot of the time we are in the same boat, and there is a fair bit of fools gold out there, Lester and Dixon to name a few. Like I said, a fair few of my trades are in the above, not to mention already having a few of the players that duded up the week others brought them in (looking at you Hamish) and as of Round 9 my team is ranked 488th so it is not the end of the world, looks like we are all in it together.

What we are looking for in the above is not necessarily for the stats to come out green (greater than zero), but for them to be somewhere close to zero (i.e. output against expectation to be similar, or at least in the same ball park!). What is promising is that in the last 3 Rounds, this seems to be happening. The fist 5 rounds, however, are playing MLB at Etihad and lining up a drop punt at the Green Monster at Fenway Park. Rounds 2 to 6 on average were about 19 points less than the expected output. No wonder we felt short changed. The last 3 rounds on average were only 2 points less than the expected output. Bang on zero if you exclude Brandon Ellis’s late withdrawal which skews the figures somewhat.   Note of interest: Beau Waters and Steve Johnson, who were both late withdrawals, were respectively the 47th (Round 6) and 13th (Round 8) most traded in players in the round.

Now in a way, the above stats are inherently due to fail, as we only really trade in players that are performing well. The average of the players above was 90 when traded, which is quite high considering the number of rookies involved. In fact, there was only one player traded in with an average less than 50 that is in the stats above, and that was Ben Kennedy in Round 8 (average due to vestage). Surely then he beat his lowly average of 40, ummm nope, he got 19 (green vest).  Conversely, there were 4 players with an average of +130 were traded in, the top two being Gary Ablett (average at time 135) and Bryce Gibbs (average at time 133). Surely they at least produced +100 scores the week they came in…. nope, 84 and 83 respectively.

As McRath always says, numbers are what DT is all about, and there are a few of them above that have been the source of many hard luck stories and ultimately have produced some sort of FMDT related statement. But as you can see, things seem to be on the up, let’s see how long it lasts.