Ahhh… the rucks. Where does Sean rank? 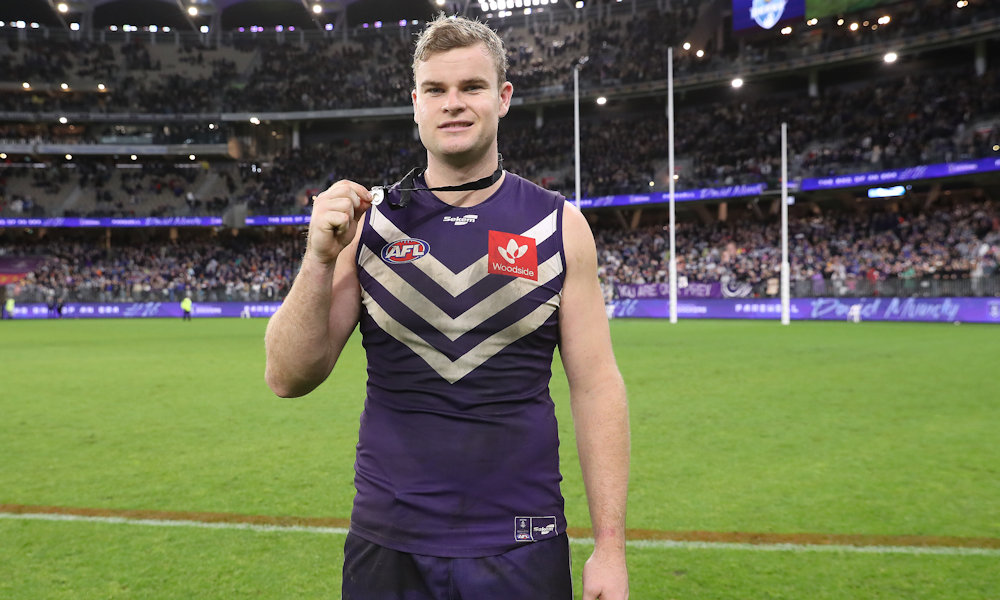 Maybe because almost every other ruck option is a complete head exploder? As was asked in the Witts Deck of DT piece just yesterday – Who’s a safer bet? English? Yes, but he has a huge price tag, durability issues and maybe Lobb now impacting his scoring. Marshall? Probably, but if they go with 2 rucks at the Saints then Marshall’s value diminishes and scoring might plummet. Cameron? Yep, but he has real queries too as Holmesy has identified. There’s not 1 guy that is query free and ready to roll. Every “top line” ruck pick has as much “set and regret” potential as he has “set and forget”. What Sean Darcy offers you is a “set and inspect”. He’s a sexier version of the Jarrad Witts pick…but he costs you $41k less!

There’s no doubt for most that Darcy is a top 5 ruck in the real world comp, maybe top 3. He’s also proving his durability is more reliable which has been the biggest knock on him in earlier seasons. He’s a lock for Freo’s number 1 ruck spot which is something any of our ruck picks simply must be. But it’s this real world R1 element that leads to the big purple elephant in the room when considering Darcy, this being the departure of the jelly-legged Rory Lobb as his backup and the arrival of the seemingly much more competent ruck partner in Luke Jackson.

Clearly questions on Darcy abound now and I have covered them twice now given my Dicks of DT hatchet job on him and his mention in the Jarrad Witts analysis. But this isn’t the section for questions and queries, this is the section for a hard sell and making an argument for getting the big man in your team. The good news is there are valid reasons for considering him.

Jackson’s arrival will almost certainly see Darcy’s ruck time diminish somewhat, but I don’t see it impacting his overall TOG%. They’ll work in tandem when working in the ruck together but it won’t mean less Darcy on the ground. I’ll also add to the mix that Darcy as a resting forward has been an effective weapon when it’s been allowed to occur in his Freo days. He didn’t get the chance to show it much in the last year because Lobb was hiding away in a pocket trying to stay fit enough to still be an interest for the Doggies – and doing that job pretty well. Now Darcy gets a chance to rest more up front rather than just on the bench. It’s just as likely they’ll move him behind the ball at times to rest back, that has worked out pretty well for other A-grade rucks in the past in terms of their scoring.

I think the real important factor to consider here in this positive section of the Darcy Deck is that he doesn’t rely exclusively on his hitout numbers for his big scores. Scanning the last 2 years of data, when he racks up 30-40 hitouts his range of scores starts as low as 67 and goes all the way up to 132. He can get hitouts and not score and he can score and not go massive in the hitouts. This points to the notion the Freo big man can score around the ground as well. He scores best when he’s getting around the place, marking, tackling and kicking the odd snag on top of hitouts. This isn’t a huge revelation for a ruckman but it does show Darcy has a rounded game that can score well when given the opportunity to not just get first hand on it. Jackson’s arrival will give him a chop out in the ruck and also freshen him up and allow him to do more of the marking and goal kicking which could diminish any negative impact of less ruck time.

In 2021 when Darcy had his best season and broke out for us in terms of Fantasy he averaged 94 with 81% TOG. Last season his TOG was 80% – so no difference. However, in 2021 Darcy was getting more help in the ruck from Lobb than he got last season. Pretty much all of Darcy’s TOG in 2022 was rucking and his scores went down 8pts per game. There is some chance that with more help in the ruck from a bloke who can ruck well but also be effective up forward (unlike the departing Lloyd Meek) that Darcy rebounds as a scorer.

All this suggests Sean Darcy comes with risk but I figure it’s highly unlikely he’ll drop much away from his 86 of last season and there’s a chance he bounces back up to 90+.

The last point I’ll make in this section for Darcy is this one. The number 1, absolute gun in terms of the best ruck for the last few seasons in Fantasy AND in the real world has been Max Gawn. Grundy was thereabouts but if all else was equal the VAST majority of Fantasy coaches would’ve gone for Max as their R1 come finals if given the choice. It’s worth noting that during those seasons Max had Luke Jackson helping him out…and now Sean Darcy does. The point here is Jackson didn’t hurt Gawn’s scoring and may have even helped him so perhaps Darcy will get a Jackson bump as well? I’m not in ANY way suggesting he’ll ever become a Max Gawn level scorer, that’s lunacy, but it’s not impossible Darcy increases instead of decreases his scoring with Jackson coming in to help him out.

Largely because of everything I’ve said in the other 2 pieces I’ve mentioned him in – it’s all about the uncertainty. The hard sell above was my absolute best effort in finding the positives and some of that actually surprised me too, I even had him in my team for a second, but then I remembered the queries and they are very real and the concerns very valid.

The most obvious counter to what I’ve written above is yes, Maxy Gawn had Jackson when Max was being a Fantasy world-beater, but Max had a more junior version of LJ so Max ran the show without question. Jackson is likely to grow in his ruck use at Freo so the resultant impact this has on Darcy could be anything, we just don’t know.

The above stats based points are nice enough to read but there are some fairly tenuous arguments made from them. And that’s coming from the bloke who made them. The facts remain that Sean Darcy is a guy who’s had little help in recent years so has dominated the Freo ruck position. Now he has much better help and the likelihood his scoring suffers is a very real concern. The increased help from Jackson is likely good news for Freo fans and the Freo team on field, but it HAS to raise doubts on Sean as a R1 or R2 option to start your year as a Fantasy coach.

In addition, whatever impact Jackson does ultimately have on Darcy, its unlikely him arriving leads to Darcy’s scoring rocketing upwards to the extent you can’t jump on him as he rises. It’s a much safer bet to have a look and see if the above hard sell I’ve done eventuates in the real world. If it does, he won’t be hard to shift too. But if Jackson’s arrival is a Fantasy disaster for Darcy, then you’ve avoided going down with that ship.

Finally, there’s also the notion to consider that Freo and Darcy now have a truly viable backup ruck option who’s also in the B22 for them. Previously the backup ruck was Lloyd Meek who played predominantly at Peel on standby. Therefore, some in-game management for Sean if he wears down a bit or cops a knock may occur more frequently than it has previously. Whilst Lobb COULD ruck, he hated it so he only did it when absolutely required. Jackson will eat up any minutes he can in there so Darcy will be more able, and maybe more willing, to call on some rest or assistance than at any other time in his career.

The lack of rock solid RUC options contributes greatly to Darcy reaching up to Queen status but the potential of Jackson benefitting him rather than hurting does have some merit to it so he gets the Q-crown from me. Given the uncertainty that exists with him and the greater chance he drops (in my view) rather than plateaus or rises he’s no King.  The thing you can be sure of with Darcy is he will give you the games you need and he will be the main man in Freo’s ruck brigade. What happens from there will be an interesting watch. I’ve only got 3 blokes ahead of him in my thoughts for Fantasy in Cameron, Marshall and English so Arise Queen Sean, you are not the safest bet in the Deck, but you’re far from the worst one.

Update: Since first putting this together Coach Longmuir of the I Hate Fantasy Coaches League has commented that the ruck matchups will vary week to week for Freo based on match-ups.  He was clear in that the ruck picture for Freo would remain unclear all year.  Darcy could get 70% ruck one week and 40% the next regardless of how well he played.  Good for the players and the team, BAAAAD for us.  It doesn’t change my ranking for him but it doesn’t strengthen the argument to select him that’s for sure.