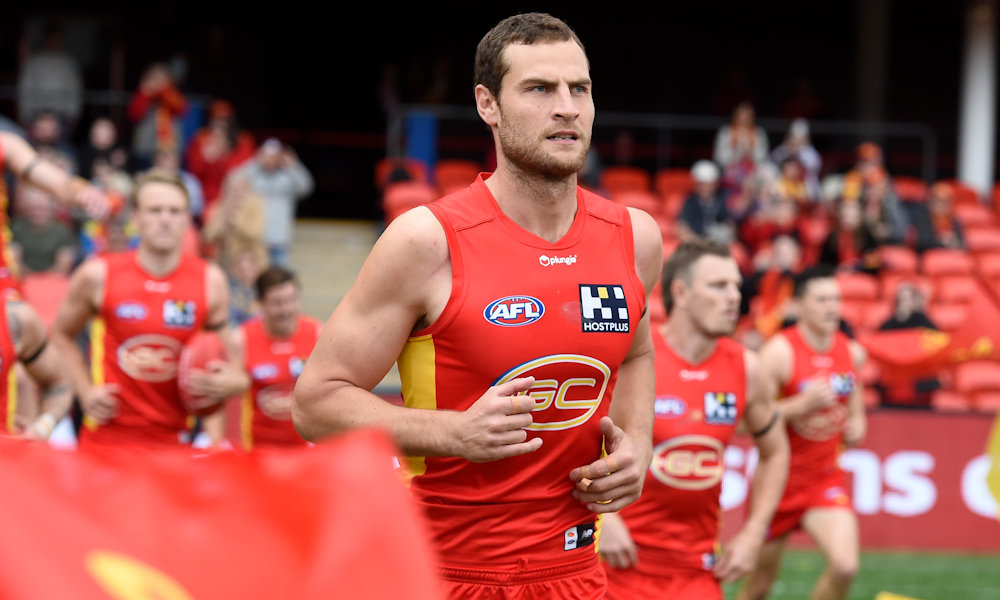 The answer to this question for Wittsy is “who else is a better bet?” There are some, but not many. I loved the write-up Holmesy came up with for Darcy Cameron but even as good a pick as Cameron is, even Holmesy proves Cameron is a good thing – but not a sure thing. The one thing you can safely say about the big J is that he is what he is, and what he is is a handy and reliable option.

Jarrad isn’t going to give you a massive day out where he brings your team home with an out of the box 135+. He only had 1 game over 120 last year but he also had 7 other games over 100 along with a 99 & 97. That’s not bad for us and it’s even better when you start looking at what other choices we have as a R1 or R2. He’s a legit set and forget option if you want to avoid the ruck mess and just bang in a bloke who will play every game, play as the only ruck and give you a good solid year whilst you spend the coin elsewhere.

His floor isn’t bad either. He bottomed out at 64 and there were big money ruck guns who shat the bed as bad or worse than that in games last year. His bad games are not disastrous and his durability is pretty close to lockable now. Those are admirable traits.

Thanks to Melbourne the ruck picture is rough this year. Not only did they do a trade that gave us Gawdy, Gawndy, Gruwn or whatever we go with for the combo they now have. They did another trade that gives us Darckson or Jacksey. By my calculations those 2 trades alone took 3 of the best 6 ruck options away from us. There’s now too much uncertainty in the ruck picture at Melbourne to pay up for Max and the same for Grundy. Who knows what that will look like? Even if it works great on the field, it may kill both guys off as Fantasy rucks. Darcy is perhaps slightly less impacted but he was also less desirable in the first place. As a result, Ruck Apocalypse 2022 has been extended.

By my count at the start of last year there were 8 guys you could count on to play every week and ruck by themselves or with very little help. Gawn, Grundy, Darcy, English, Lycett, The Big O, R’OB and this man Witts. Now there’s only 4 and Jarrad remains one of them. Gawn, Grundy, Darcy and, in my opinion, Lycett have all left that group. I might be being harsh on Lycett there but the work Dixon and Finlayson did when Port ran out of rucks last year does raise the possibility of them being used to help Scott this year in larger volume than previously.  Witts remains a viable and safe option, just not an exciting one.

Our old mate Jarrad Witts gives us a nice comfy chair to sit in whilst we collect our thoughts, collect our points and survey the landscape early on in the season. He could simply be the station we wait at for a ruck like Maxy or Brodie to drop down too, or for us to jump on someone we don’t know yet as they rocket up and prove their new worth. He’s unsexy but worthy of your consideration.

He’s boring. That’s pretty much it. Jarrad scores in numbers that won’t excite. Yes he topped 100 last year 8 times, but he got in the 60’s or 70’s in 8 games as well. He’s not going to win you a league game and may not win you a Hat either. Hat’s are won with more exciting moves than J-Dub one would think (I wouldn’t know) so starting with Witts is maybe the move that costs you ground. There’s riskier options out there who could pay off in a way that Jarrad won’t.

Jarrad isn’t cheap either and so whilst it’s unlikely he’s going to cost you coin, he’s not going to make you much cash, if any at all.  There’s cheaper options that may well be just as good, or even better.

Ultimately though the question of “who else do you trust?” does throw up some very decent options, some even cheaper than big J-Dub.

Old-ish, reliable and boring may not win you your league or a Hat, but then again it just might if the ruck disaster continues and JW is standing there like a rock in the middle of a storm for your team. I doubt he’ll be in many teams but many of us may well rue going somewhere else if we don’t go with Big Jarrad, at least early days anyway. It was only last season during the great Ruck Apocalypse of 2022 that Jarrad Witts could well have been the ruck pick of the year of you had him early and held fat.  But his overall value and scoring potential this season makes him a Jack.