What’s gone wrong with the Tigers and Eagles? 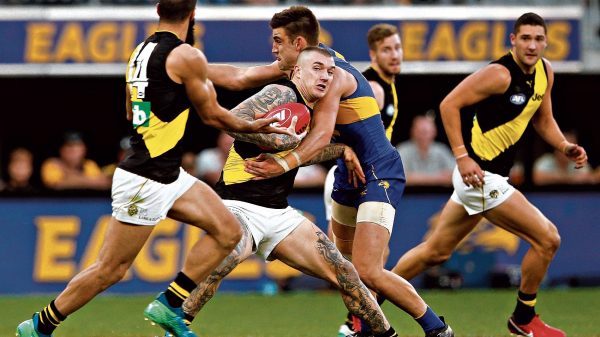 Richmond have won the last two AFL premierships and three of the last four. The Eagles won the other flag in that time. But both are facing a fight to make the finals in season 2021.

Ahead of Round 18, the defending champions find themselves placed in 12th spot on the ladder with a 7-9 record. The Eagles are clinging on to a top-eight place with an 8-8 record.

Such is the tightness of the middle section of the ladder is underlined by the fact that six teams – Fremantle Dockers, the Eagles, St Kilda, GWS Giants, Essendon Bombers and Richmond – from seventh to 12th are separated by just one win.

It promises to be a thrilling fight for the finals across the next six weeks. But the Eagles and Tigers need to find a solution to their current problems if they are to be playing finals footy this season.

What has gone wrong for each team? And just how far have they slipped in the AFL Premiership betting odds?

Consistency has been the big problem for Damien Hardwick’s Tigers side. They traded wins and losses during the early part of the season as injuries hit, but things have only gotten worse in the last month, with Richmond suffering four straight losses.

Richmond are now $15.00 seventh favourites to retain their premiership according to AFL betting tips, while the Eagles are at even bigger odds. Adam Simpson’s side are out to $41.00 to be crowned AFL premiers this year.

The Tigers have been upset by St Kilda and Gold Coast, and coughed up a 29-point lead in their loss to Collingwood.

Injuries have bitten, but are we just seeing the end of the era of this Richmond premiership team? Every team runs its course and there may be more life in these Tigers if they can scrape into the finals, but a rebuilding job is what looks likely.

West Coast are in a slightly better position than Richmond, but they have lost three in a row since defeating the Tigers.

Defeat to the Western Bulldogs at home perhaps was acceptable, but a 92-point thumping at the hands of Sydney Swans as the Eagles scored just 26 points was an ugly side to the recent premiers. Their woes soon continued as they lost by 10 points at home to bottom side North Melbourne.

Injuries have been a factor with Tim Kelly, Luke Shuey, Elliot Yeo, Oscar Allen, Alex Witherden, Jeremy McGovern and Liam Duggan among those to have been sidelined during the season.

But it is a disharmony in the Eagles camp – and a lack of form from key players – that is the biggest problem. It was underlined as Yeo and McGovern clashed in the loss to the Kangaroos.