The Weekend Wash-Up – Round 12

Join Matt for a look at the round that was. 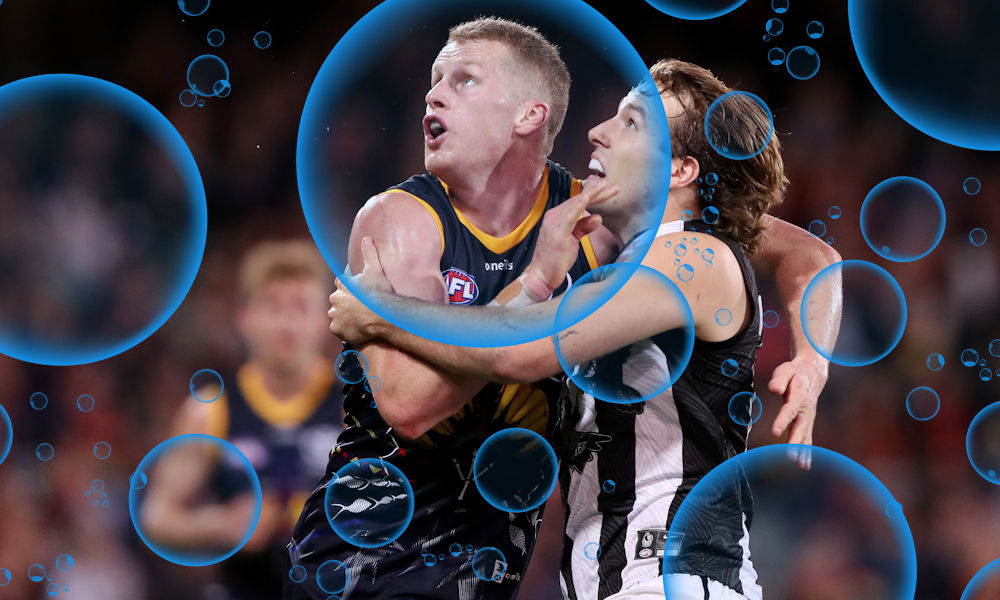 Bye week one out of the way, and it was supposed to be our rookies chance to shine. And shine they did. I could put together one of the all time great dodgeball teams. Not only that but my cult hero Sean Darcy goes down to put the icing on this cake, awesome stuff. Whatever. It’s time for the weekend wash-up.

Petracca (119) – My number one trade target in round 15. That’s how you bounce back from a shocker, what a beast.

Poulter (105) – Caleb Poulter is becoming a hat winning pick. Just consider the fact that a lot of us brought in Finlay Macrae for similar coin the week before. Total game changer.

ROB (111) – We need a new section because he is the furthest thing from a legend you will get. He will not be named nor mentioned ever again in this article. I’ll be dead before I ever bring him back in.

Langford (114) – My number one target coming off his bye next week. He has moved into a pure midfield role and he looks incredible. Gun!

Martin (109) – Obviously incredible value. It’s Dusty at the end of the day. He might be about to turn it on to finish 2021 and I need him in my team.

Walsh (127) – Sam Walsh is playing out of his mind, it’s a shame he doesn’t have a single player capable of going along with him. Carlton are awful, Sam Walsh is a must have. Legend!

Hurn (107) – Just quietly, Shannon Hurn is averaging 100 without his injury affected 6. His bye moving to round 14 is devastating, because he was a genuine option.

Sheed (123) – There is no reason Dom Sheed shouldn’t be a fantasy jet, but he manages to produce these horrendous scores that render his big games totally useless.

Bontempelli (125) – The Bont is so dominant he’s starting to match Patrick Dangerfield’s fantasy dominance during 2017/18. He’s just too big, too strong. At full forward or in the midfield, he can’t be stopped. Criminally under-rated in fantasy.

Parish (160) – Unbelievable. Honestly I hope Darcy’s back is alright. Because once a week the poor guy straps 29 grown ass men on his back like he’s starring in 1917, and just carries them through the f**king trenches.

Zorko (118) – The ONE time you absolutely CANNOT get suspended… is during the byes. Only Michael Walters has ever stooped that low. Until now. There is no saving grace to this, hang your head in shame Dayne. Every bit of good work he has done has been undone, what an absolute howler.

Harmes (62) – At the end of the day, it’s still James Harmes. He’s in the midfield, and he’s going to be solid. Just don’t expect an average of much over 85. I think you can do better at this point.

Billings (56) – This is why we can’t have nice things. The SCG sucks for wingers, but that doesn’t excuse this pitiful effort. If he’s not under a roof at Marvel Stadium Billings is practically useless. Too unreliable.

Heeney (66) – He JUST gets a pass for me, thanks to his 135 point effort the week before. That won’t ease any of the pain for those who traded him in last round. He had an absolute howler of a game, and if he can’t do it against the Hawks next week it will be simple. Thanks for your one week of service Isaac, pack your bags son.

Warner (37) – BE. RUTHLESS. Some sideways moves you could have done over the past month (with some DPP). Callan Ward averaging 110. Isaac Heeney averaging 95. Kyle Langford averaging 113. Higgins averaging 107. Ladhams 99. Chad Warner 47. No good.

O’Connor (20) – Pretty easy to see how Adelaide thought he wasn’t ready. That’s because he might not ever be ready. We may never see poor Ronin again after that effort. Embarrassing.

Ridley (73) – He’s plummeting quicker than a crypto portfolio. Role is everything in fantasy.

McGrath (15) – Langford and Parish, all aboard. Essendon can’t catch a break, but it also helped them discover you should probably play midfielders in the midfield. Catch 22.

Cripps (72) – When the tackles go, so does his scoring. Decent option, just don’t see him as anything more than a high 90’s guy. Anything better than that is a bonus. Better footballer than fantasy player.

Fyfe (48) – This was bad before the injury, that was just the icing on the cake.

Fantasy Gods… You can take away my sanity. You can take away my happiness. Don’t take away my cult heroes. Taylor Adams has proven to be one of the AFL’s most injury prone players, and that was a question mark over his head when listed as a defender. He averaged 115. Was that worth the risk? You can only make your decisions based on form and form alone, and Sean Darcy was a great pick. Don’t let the captain hindsight crystal ball geniuses let you think otherwise. This game sh*ts me.

1675. It’s what I like to call the DP3 effect. I actually had one of the worst weeks you’re likely to see from a squad. Sholl. Embarrassing. O’Connor. May as well start his post season now. RCD. Playing left right out. I didn’t have the luxury of having 20-21 players like many others, so everything from RCD up was counted. How I managed to have 6 players score under 50 and scrape my way to a score that held my rank was a minor miracle. I guess a 320 from Charlie helps.

We are a mess at the selection table this week, I actually don’t know what we’re going to do without Darcy Parish. Having said that, I should comfortably have 20 this week, not including King Ronin and holding Sean Darcy. Even better than that, even with the 8 bye teams in Round 14 I should get to 21 players without any issue at all. In fact my team is going to be so setup in Round 14 I’ll be slightly disappointed if I don’t win the week.

It will be a double rookie fix up for me this week, I am looking ahead and cash generation is going to be a serious issue for me after Round 15. Ned Reeves looks awesome and is basically a lock for me this week, allowing me to hold Big Sean and hopefully generate some cash while doing so. Joel Amartey is also coming in so I have ruck forwards coming out of my ass. Whitfield is the only upgrade option I genuinely love this week, although Dan Houston’s name is still in the mix for me if I decide I can’t go another week with Lachy Sholl in my side.

That cash in the bank can finally be put to use and it allows me to downgrade Jordon to a basement rookie next week. Talk about a cash grab. I hope fantasy don’t let me have 4-5 trades next week because my team will be bananas. I actually think the Richmond Eagles game switching helps fantasy managers, but of course I say that now. Just wait for carnage to strike in Round 14.