The Thursday Scramble: Round 14 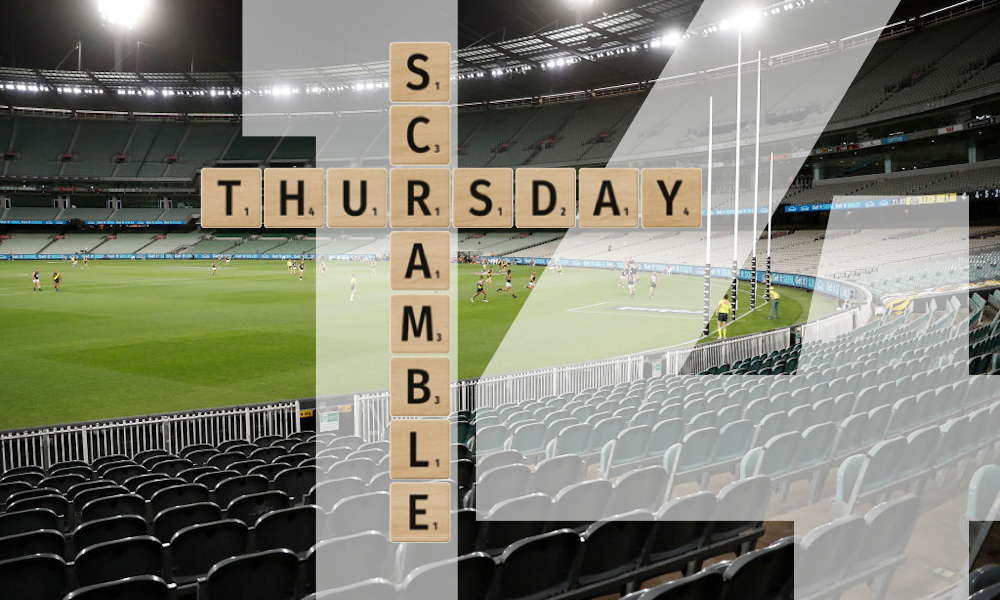 Here we go again! Footy Frenzy II is upon us. But this time it has got more bite to it! Last time we had a few byes, this time they are coming at us thick and fast. Are you prepared? Do you know what you are going to do? If you do then well done, you are certainly a step ahead of me. So, let’s have a look at a few things that you can do to try and get ahead of the pack as we only have 5 rounds or 40 games left to go.  If that isn’t a reason to Scramble I don’t know what is!!

With so few weeks to go all of the various forms of the game will start to hit finals sooner or later. To give yourself the best chances you need to ask yourself one important question. To Bye or Not To Bye? Do you take a guy that still has a bye to come or not? Well one of the key things here is what game you are playing and what rules they are using.

This is a pretty easy one, if someone is on a bye it really doesn’t matter this season. You get their average as long as they played in the immediately preceding game. So you can trade freely and you will know exactly what score you are going to get.

Supercoach/Real Dreamteam – Best 18 and Zero for players on a bye.

This is where things get tricky. Just because someone has a bye coming up it doesn’t mean that you should immediately discount them as an option. Think about it, they are playing best 18 so if you have two or three guys on a bye it isn’t going to matter. You will still be ok. So it is a very valid strategy to trade in guys that have the R16 bye now if they are the best player you can get and they will help you in R15.

Just because Round 15 may not count in your league it doesn’t mean you just have a week off. These types of weeks are the ones that can see you leapfrog a heap of sides! So don’t discount the round and use the trades to your advantage.

WARNING WARNING WARNING!
Do NOT forget that all BYE players will be locked out at the start of the first game of the round in AFL Fantasy Only. In Supercoach and Real Dreamteam they aren’t locked until the start of the Last game of the round. Don’t let this catch you out.
Now, while we are on that first game of round 14 It starts at 4:40pm AEST!!!!! DO NOT MISS THIS DEADLINE! It is a bloody early start due to the double header. Why so early? What about the crowd? Well it is being played here in Adelaide and it is Hawthorn v Essendon so it won’t be a sell out I don’t think. Just don’t miss this deadline.

Did I mention your bye players will be locked. What this means is that if you want Lachie Neale’s Average score of 103 as your captain score you need to put the C or VC on him before the start of the round. Then if you have put the VC on him you need to see if that 103 is enough and you want to loop that in or take a chance on the C on someone else…… wait… what is he going on about you say? We will already know his score won’t we??? YES that is correct, so if we see people VC’ing Lachie we will have to have a serious word with you!  Putting the VC on him is absolutely pointless, we already know what he will score! If you want it put the C on it. If not go with two completely different players!

Team Announcements are still the day before the game. So make sure you are prepared for this. We know the players for Thursday night already and before the game starts tonight we will know tomorrow’s games. The great thing about this round is that before the Friday game we will know another 3 matches. So before tomorrow night’s game starts we will know all but the last two games of the round. This means we will know if a guy like Gawn is named, but we won’t know if Grundy is being rested or not.

Probably the biggest news to come out of the Selection Table for the Thursday teams is that the big man Sam Draper is being managed! This is a little surprising to me to be honest. His first game back in his home state I would have thought a bit of romanticism would come into it and his family get to see him play a couple of games in Adelaide. Anyway, what this means for us is that if he is your R3 you will be very nervous that one of the big guns like Grundy or Goldy aren’t a late out on Sunday and Gawn does play. The other worry is that Nic Nat is a late out in the Thursday night game as he could be rested too.  Heaps of things are hanging on Draper being rested. However, it is probably better this week than in R15 or 16 when both Goldy and Grundy have a bye respectively. You have two choices here. Hold a trade in case one of those guys are out and side swap or you just make the trade now. Remember in RDT and SC it is best 18 so even if one is out it isn’t as bad as it could be.

I would like to say that I am more prepared for this Footy Frenzy than I was last time, but I don’t think that is right, I think I am just as nervous about this one as I was about the last one! It is not easy and it requires a lot of attention from you. Set alarms for about 20 mins before game start times so you can check late outs and make sure your team is set correctly. Give yourself enough time to make trades if you need to and have your trades worked out well before then so you know what you are doing once teams are confirmed.

Lastly, have fun! As with the last frenzy I will see you all after it for a R17 scramble as it is just too hard to get one written for you during the round. The extremely short turnaround between rounds means it is difficult to put something out for you in time for it to have any meaning. Plus you all have so much footy media to consume in a hurry between rounds I am sure you will get everything you need.

Best of luck with your Fantasy Finals and I will see you for the Prelim Finals in a couple of weeks!

The Thursday Scramble: Round 13