The Thursday Scramble: Round 13

Round 1 of the Footy Frenzy is over, it is time to take stock and get ready to Scramble through round 2. 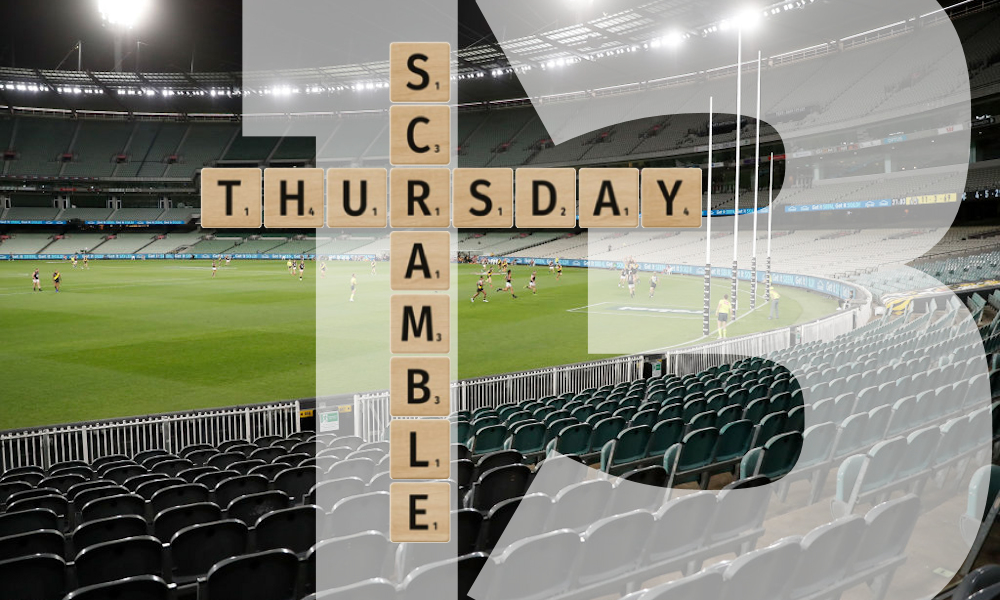 Wow, did you all survive the Festival of Footy?  How intense was that. It has been kind of nice this week to have a couple of nights off to get our breath back. Firstly let me apologise for not posting during the compressed schedule festival. It was just too quick on the turnarounds and the games were coming thick and fast. I didn’t have time to think about my own trades let alone put out some advice for you.

Anyway, I’m here now and we can have a bit of a review of what happened and do a little thinking about the future.

What did we learn?

The last few weeks have been like no other we have ever seen in the AFL or Fantasy. A few things have been great and a few haven’t.

Team Announcements 24hrs before the game is no good.

Not knowing who is in our out towards the back end of the round makes it incredibly difficult to plan our trades. What this means for us is that we need to have multiple scenarios and trades ready to go. I found myself on a couple of occasions get to the last couple of games in a round and not being sure what to do with my last trade. I had held it in case I needed it and then I couldn’t make the best use of it.

Don’t be afraid to use all your trades early in a round.

So following on from the last point, if you have a plan and know who you want, just go ahead and do it. If you wait then your options for getting that player you so desperately want may diminish to the point you are stuck. If you have cover in case of a late out then you should be more than able to weather any storm that may arise if you have already used all your trades.

While a rolling lockout can be a bit of a pain in terms of having to be on top of the start of every game. It can also give you plenty of opportunity in regards to using not only the captain loophole but also you can do the same for your emergency players. Add to that the ability to make your trades later in the round and you have options. However, as Yoda would say, with great power comes great responsibility. By taking a loophole you can then limit your ability to cover a late out by using an emergency spot that you wouldn’t otherwise use. If all your emergencies are locked out before you find out a premium isn’t playing you can quite easily find yourself with a donut.

What of the future?

Well we have survived one Festival of Footy, we have one more to go. And this one is set to be tougher on fantasy coaches than the first.

The bye structure that we have found ourselves with is very different to what we are used to. Normally we have more than 10 weeks to structure our teams so that we aren’t overloaded in players from the one bye. This time around we have only had 3 weeks. What are our options?

AFL Fantasy has made this fairly easy for us by giving us the average score of those players on the bye. So you have a known quantity. You can even trade in players and know exactly what they will score. Just don’t get caught out by the fact that they will be locked in from the start of the round. But Remember….. the player MUST have played the round previous for them to earn their average score in their bye.

RDT and SC. They are playing best 18 for those rounds so you want to maximise the number of premiums in that round. The fewer rookies you have to rely on the better your score will be. So in this case it is actually a valid option to be trading in players on their bye in rounds 14 and 16 given there are only two teams on byes in those weeks but it is still best 18. You won’t get hurt anywhere near as much as you ordinarily would in a normal bye round.

Make sure you are across when your finals are. Supercoach and RDT have just one round of the regular season left before finals. Finals will start in round 14 but then they will skip round 15 and hence the round with 6 teams on a bye before recommencing in round 16. This means the first two weeks of finals will see teams on byes.

AFL Fantasy by default has two more weeks of regular season games before hitting the finals. So the first week of finals will be round 15 which has the multiple byes. But given they are using the average scores you should know most of the scores as you head into the game.

Not the Sic Dawg!

It was devastating to see one of our favourites go down with an ACL injury on the weekend. He was heavily owned across the Fantasy community and now we all need to find a replacement. There are plenty of players to take but it is how you replace him that is the interesting part as it affects what other trades you can make this week. There are two schools of thought on this one.

Option 1 is to replace him with the best available that you don’t have and that would be a Luke Ryan or a Jake Lloyd. This will cost you more money though so you will either need to downgrade someone else to get the money or you may have cash in the bank. This means that you will get one premium and a rookie or a mid pricer.

Option 2 is to replace him with someone a little cheaper. Not the ultimate top of the range player. What this would allow you to do is use the cash you have made by possibly downgrading Sicily to add to a maxxed out rookie and upgrade them to someone better too. However, this option will see you get a couple of good players whereas the other one will see you get a top player.

This is a question that will only be able to answered by individual coaches with the specifics of their team in mind. I think that the way I will head is to get the best available rather than two medium pricers. The reason for this is that I don’t want to have to trade out whoever I bring in again. This late in the season you don’t want to be dealing with sideswaps if you don’t have to. However, it is a viable strategy, just be prepared to hold whoever you get in as each round may bring you bigger issues to deal with (like resting, which the Eagles have already flagged they will do).’

Well we are about to head into our second period of Footy Frenzy and it will be just as wild as the first one. Just keep your Witts about you and plan, plan and plan some more.
Lastly I hope all of our Victorian readers are doing ok and know that we are all appreciative of what you are going through to try and rid our country of this virus. Enjoy watching the footy every night and hopefully by the time the footy season is finished you are all back out and about again.  I know I am already looking forward to coming over to a game at the MCG next season (I was supposed to come over for the Power v Tigers this season).
Best of luck with this round and see you all again next Thursday for the start of round 14!