Is one game enough for you to trust Marlion Pickett in 2020? 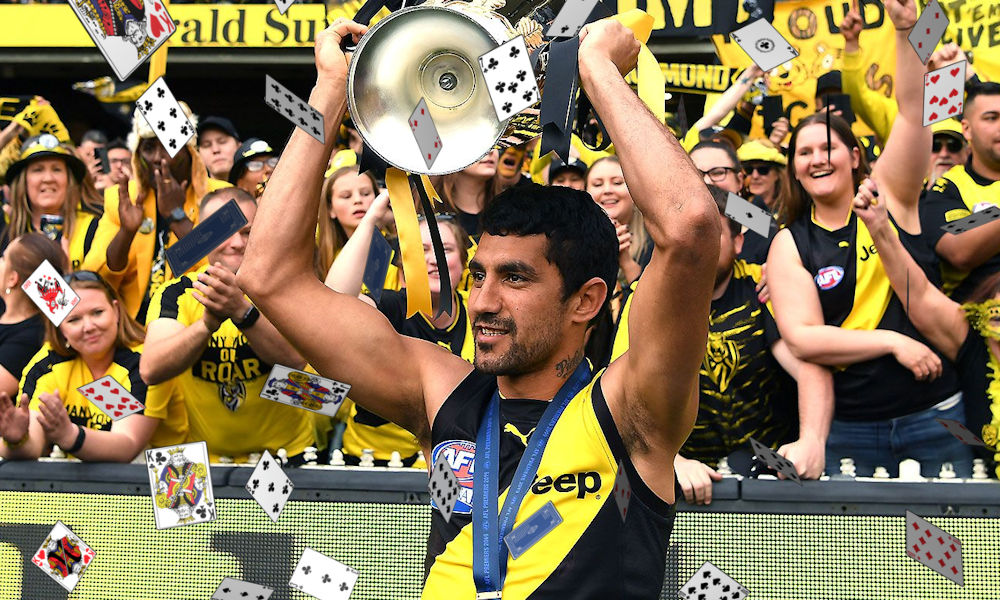 Simply put, if Marlion Pickett is picked to play for the Tigers in Round 1 then he must be in your side.

I’ve already had something to say about Pickett this preseason and there’s no reason why he won’t be the most selected player when the competition opens in a few short weeks. At a price of just $170K, there is hardly any risk starting with the instant cult hero from Tigerland, with Pickett poised to be one of the biggest earning cash cows this season thanks to his starting price reflecting an average of 22.9. We all saw how Pickett performed in the season-decider in what was his first AFL game, which is still difficult to comprehend when you sit back and think about it. The last time someone made their debut in a Grand Final was the same year Leigh Matthews was born!

On the game’s biggest stage, there were no first-game jitters to be found as Pickett helped himself to 22 disposals, a crucial goal, a blind turn that will live on in footy folklore and 4 Norm Smith votes – good for a 3rd place finish as the best player on the ground. He didn’t get there by accident with the mid-season pick up putting up solid VFL games to well and truly earn his spot in the eventual premiership side. Just one week earlier, Pickett was awarded the Norm Goss Memorial Medal as best afield in Richmond’s VFL premiership with a score of 98 fueled by 20 disposals and nine tackles.

Pickett’s previous track record of decent scoring doesn’t stop there. He only managed two games in the WAFL before the Tigers pounced (pun intended) on him in May last year, with injuries hampering his campaign. However in 2018, when he won South Fremantle’s best and fairest award, Pickett averaged 90 fantasy points and 21.8 disposals from his 20 league games. That sustained success at the state level led to Pickett achieving his ultimate dream in 2019 and coaches will be hoping he can maintain his Grand Final heroics over the length of a full fantasy season.

If you’re trying to make the case against starting with Pickett it revolves heavily around his avoiding the axe. All signs point to Richmond starting with the 27-year old in their 22 to clash with Carlton, but just how long can he hang around for?

Competition for spots in this Tigers outfit is going to be at an all-time high in 2020, thanks to the supreme job the club has done in building their list. That’s great for their depth if injuries strike, but it could also mean plenty of fluctuation between the final few spots in the team. Remember, the Tiges were without Sydney Stack and Jack Graham on Grand Final day and both of them could force Pickett to sit as a dreaded emergency to start the season. If Pickett slips out of the rotation, through poor form or even another injury, we could see someone like Jack Ross and/or Riley Collier-Dawkins make the most of their opportunity and hold Pickett in the two’s.

Pickett hasn’t put a foot wrong so far and he’ll be in line to hold his spot from Grand Final day, but with a relatively healthy midfield unit heading, one slip up could see the fan favourite lose his spot and leave him with a fight on his hands to get it back.

While I don’t think Pickett will have the same scoring punch as a traditional Deck of DT ‘Ace’, he is that important when it comes to building your starting team. It’s not farfetched to see Pickett average closer to 80 thanks to his previous history of good scores, but the ‘team-first’ moniker at Richmond makes an average closer to 70 seem realistic. Role won’t be a concern for the pure, classy ball-winner, but I’ll be keeping my ears glued to Hardwick’s updates on their one-game wonder throughout the preseason just to be safe.