The Weekend Wash-Up – Round 15 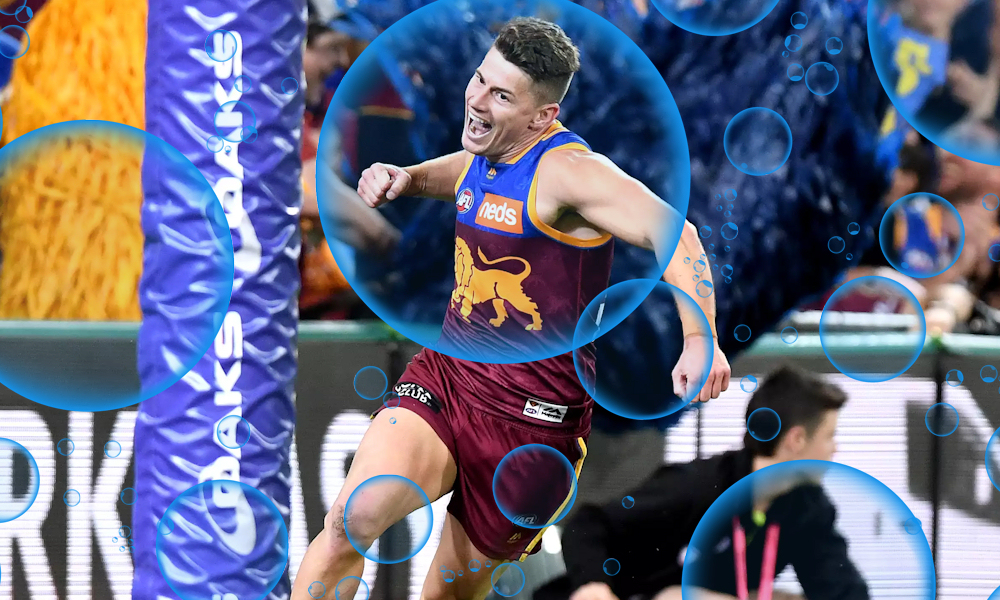 Another week, another injury. Or three. What’s new! The byes were behind us, but our scores didn’t improve as many would have hoped. Let’s talk about it. It’s time for the weekend wash-up…

J.Kelly (120) – I didn’t see this game, did Dylan Clarke even bother tagging anybody? Or are we just giving up when it comes to stopping GWS midfielders. The number one player in the game and rightly so.

T.Kelly (121) – The Kelly borthers marched on again. Tim has been pushing his luck with some shockers, but this score takes his season average to 103. Jet.

O’Meara (136) – O’Meara has struggled with tags, but the Eagles chose to shut down Jarman Impey instead. Yeah…… Interesting one. Every time Jaeger has scored a ton it has been 110+, now we just need some consistency.

Gaff (119) – Andrew Gaff looked on target for 140+, but his owners will still take this score. Given the Eagles easy run for midfielders, you need to be working on operation Get Gaff.

Shuey (142) – Do yourself a favour and check out Shuey’s second half. 100 points if you don’t mind! His last quarter of 15 disposals and 5 clearances will be hard to beat, he just steps up when it matters most. Put it this way, if I was an opposition coach I wouldn’t be tagging Gaff.

Heeney (114) – The perfect option if you love heart attacks. 21 point first half, 93 point second half. Bizarre.

Treloar (129) – Even when Collingwood are belted, Adam Treloar gets it done. That’s three 120+ in a row, he’s cementing himself in the top 8 midfielders.

Ziebell (120) – Can we play 8 forwards please? The defenders are a genuine tragedy, the forward line is straight fire. I wonder why. How many of the top 8 are genuine forwards? Let’s see. Danger, Kelly, Boak, Dusty, Dunkley, Ziebell, Billings, and yes, Rowan Marshall. So we’ll have none of these guys to pick from next year… It’s basically a second midfield line, featuring an extra ruck! Take your pick.

Lycett (140) – Yes Scott Lycett has gone bang without Ryder, it was also against Tim English and Rhys Stanley with a side serving of Darcy Fort. I wouldn’t make this move for Gawn, that’s a big step backwards.

Dunkley (121) – That makes it 7 of his last 8 scores over 118. His 5 round average is 127, second only to Josh Kelly. Those are piggish numbers. Forget the fact that he’s a must have, he’s a must consider for your armband every week. Bont gets the tags, Dunkley just racks up.

Marshall (121) – I love this guy, he’s more of a midfielder than a ruckman. He even peels off to the wing for cheap marks! Think Stefan Martin in his prime. Depending on the severity of Max Gawn’s ankle injury, Rowan Marshall could become a lot more popular. North Melbourne will be a test, but then he plays Geelong and the Bulldogs. Lycett has just scored 130 and 140 against those two. You could easily ride him for 3 weeks, let Gawn plummet and hopefully not miss out. It makes sense.

D.Martin (128) – If you don’t own Dusty yet, then I’m not sure there’s much hope for you. I don’t know how he has done it, but Dusty has gone from unwatchable to unstoppable again. He’s in the zone, and I can’t see him slowing down. Legend.

Zorko (143) – It was a typical Zorko masterclass. He’s too inconsistent to be a top 8 midfielder but if you own him, ride the wave.

Lyons (135) – Typical that I play him in draft this round. Shame he only rocks up once every couple of weeks.

Salem (112) – Brisbane’s 17 behinds helped Salem rack up 10 play on’s from kick ins. He’s a reliable scorer these days, especially with those bonus kicks in play. A solid 95 average defender, and that’s exactly what a lot of us need.

Fyfe (133) – Overdue, and it was Carlton at home, but it’s a big improvement. Fyfe loves a derby and should be awesome next week.

Walsh (125) – I can’t see a scenario where I could have held Sam Walsh during his bye, but god damn he’s a better option than Angus Brayshaw at the moment. I hope you didn’t make that swap, that one stings.

McGrath (49) – It’s lucky Essendon won, because Andrew McGrath gets away with murder. I lost my draft matchup by 2 points, and this is what Andy dished up. Disgraceful.

Taranto (83) – Tim Taranto in trenched in the top 8 midfielders. Just don’t ever captain him. His scoring makes no sense. It’s either a 130 bomb, or he doesn’t touch the footy in what seems a perfect matchup. Unpredictable.

Dangerfield (92) – As a coach with the brains to stick by his never again list, non-captain Danger did a good job of getting to 92 on Friday after that hit. Good effort mate.

Smith (56) – Genuinely pathetic effort mate. I wanted to make one move this week, and that was Brodie Smith to absolutely ANY defender in the league. Sadly thanks to Caleb’s hamstrings, he stays. Again. Overstaying his welcome.

Gibbs (50) – How the mighty have fallen. Carlton traded Gibbs to Adelaide, but then traded them their number one pick this year. The circles and roundabouts of clubs who have no idea what they’re doing.

Laird (78) – Stinger. As a non-owner I’m happy to see his price remain steady, but I just realised 44% of the competition won’t be so forgiving. He just can’t get going.

Yeo (87) – The Hawks were justified in tagging Yeo. He doesn’t get involved in link up play anywhere near enough, most of his scoring is around the contest. Howe was all over him at every stoppage, and it hurt the Eagles big time. However they probably should have paid Luke Shuey a little bit of attention in the last quarter. Thank god Yeo still laid 11 tackles!

Hutchings (33) – This could be a blessing in disguise for the Eagles, only time will tell. I think it’s a big win for fantasy coaches! Sorry Mark.

Sicily (59) – There can be no excuses here. Did you see Caleb Daniel’s efforts in the rain?! This was gutless. Unless you have the best team in the country, hold Sicily. And say a prayer.

Henderson (67) – And that ladies and gentlemen, is why you don’t own Dicky Henderson. Stinker.

Daniel (84) – Not for his performance obviously. Tagged in shocking conditions, but if he hadn’t done his hammy this would have been close to a ton! Anyway. Typical, now the coaches smart enough to own him, have to trade him. Over this bollocks.

Hunter (57) – Lachie Hunter’s fall from grace continues, this takes his 5 round average to 81. I would have called him one of the safest options out there, this game makes no sense.

Gray (72) – This however sort of makes sense. As good as Robbie Gray has been, if you have a forward averaging less than 100 they need to go!

Ellis (47) – I was getting really desperate for a good loser this week, and here’s one. You can tell in the first 5 minutes of a game whether the capable Brandon Ellis is rocking up, or if he’s just there to get a tan and look pretty. Well he didn’t think that through, because his deck chair didn’t get much sun under the roof… Disgrace.

Houli (72) – I look back at Round 12, where I lost Lachie Whitfield and I had to get Bachar Houli. Then I look at Josh Kelly racking up 130 every week and wonder why I bother with this sh*t. Bachar freaking Houli.

Gawn (50) – Sunday arvo wasn’t pretty to watch. Angus Brayshaw makes it hard enough as it is, but for Max Gawn to nearly snap his ankle off just put the icing on the sh*t mixer cake that was Round 15. How his ownership is just 45% blows my mind. Beard’s out for Max everyone, we need him taking the field this week.

Curnow (9) – Do any draft leagues go this deep? Maybe there’s some die hard blue baggers backing their boy. Tough scene if so.

Logue (42) – Thank you! I don’t think I could have dealt with another massive score from Griffin Logue. A nice conclusion to a pretty boring round.

Two or three shocking scores aside, it was just an average round. Thanks to these five blokes for stepping up!

J.Macrae – Oh captain my captain. He can do it under the roof, and he can do it in a monsoon. His 36 touches, 5 marks and 6 tackles were critical. My vote.

D.Martin – When Dusty decides he’s going to tear games apart, you just sit there and wonder how he ever played so poorly lately. 36 disposals and 7 marks! Welcome back.

J.Ziebell – Not to be forgotten after his bye, Jack Ziebell only needed 25 touches for his 120. 2 months ago I would have called it lucky, now I call it efficiency.

Caleb Daniel. Why do bad things happen to good people? And I’m not talking about poor Caleb, although get well soon mate. No, some of us just can’t catch a break. You’ve heard this rant one hundred times so I’ll spare you, but bloody hell. Can someone in the top 100 lend me their crystal ball? This game is sh*tting me!!!

2226. It’s a pretty accurate description of my year so far. I haven’t ranked inside the top 1500 for a single round all season, yet that’s where I sit overall. Confusing. It’s nearly there, but something is always missing! This week it was a disaster in defence, but I certainly wasn’t alone.

Moving forward, it will be interesting to see if some of us ever actually get to complete our teams! Caleb Daniel is an automatic trade, and Max Gawn might join him. At this stage I’m torn on two options.

Daniel goes up to Whitfield. Or Daniel goes down to a Salem, or even Connor Blakely and Worpel becomes Rocky. At this stage of the season it’s all about instant reward, and Rocky should give you that this week. Normally I’d say only trade someone in you plan to keep for the rest of the season, but the extra cash Blakely gives me will allow me to get Whitfield and Josh Kelly in the next couple of weeks which is huge. It will only be a short term move anyway, that is of course if we’re not forced to sideways trade every week!

Salem is the safe move, but if I get any word on Blakely having a better role in midfield he’s in. I might just roll the dice anyway, seeing as Laird could be a better option than both for the last month regardless.

If Gawn is out he will drop to Marshall and Whitfield is back in.

Good luck legends, all the best next week. Let’s try again for those 2400’s!