After scoring us 161 in my #1 spot, Coniglio has been dumped down to #7. Check out Cal’s thoughts this week. 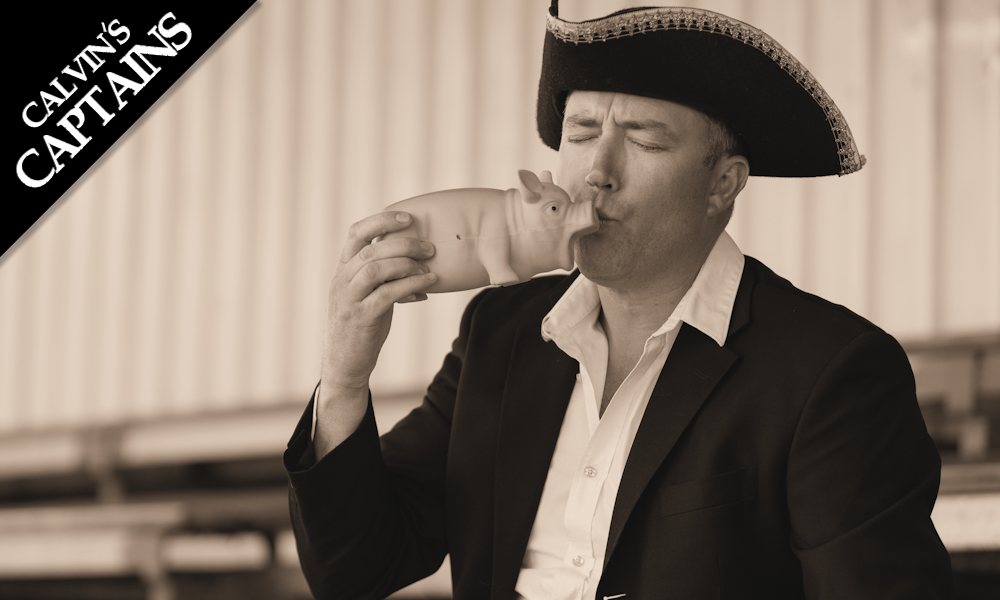 Welcome back to another edition of Calvin’s Captains.

Here you will find the best players in the game, looked over by a one eyed-pirate as I cover every angle of what might happen each week.

After analysing the player, their opponent, form and even the ground they play on, I construct my top 10 players in the order I would pick them as my captain for each week.

I’ll also be doing a LIVE Periscope at 8pm every Wednesday to answer any Fantasy questions you have, so be sure to join me. Had my wisdom teeth out yesterday so I’ll see how I’m travelling for it.

Peri-punt is on tonight so join in the #AFLFantasy chat with a Boags as we talk news and captains. https://t.co/hMX0IuMenw

TAG ON THE COGS?

After a smashing game last week with 161pts and my No.1 captain option, how could I possibly turn my back on Stephen Coniglio this week? We’ll… I will be.

He still sits at #7 on my rankings which is still fine, but I’m tipping a tag from Hutchings here.

He tagged Zorko last week to 94 (20 disposals) and will surely run with Cogs after his awesome game last week. He was so dominant and the fact he kicked 3 goals means he now attracts more attention.

He scored 104 and 111 on the Eagles last year and in those games, Kelly (89) and Shiels (78) copped the Hutchings’ tag. No Shiels and potentially no Kelly…. You can now see my concern.

Add to this, even though the Lions won last week, they only managed two scores over 95.

The Eagles will be angry this week and they’re back at home. The writing is on the wall for this to back fire, but I feel we have better and much safer options.

He was solid enough last week without going gangbusters with 107 but let’s not forget he plays the Hawks, a team the Crows lost too, but scored well against last week.

Macrae is the same here. Expect big things people… he’s my number 1, and my captain.

OK ROCKY… WE GET

He ticks a lot of boxes this week and has proven in his last two games that he is back doing what he does best. Get on and even chuck the C on the swine if you like.

For those asking about the loop hole… the answer this week is “you might as well”.

Adam Treloar was one of 12 players over the weekend who scored 120+ and he might shake it again here. He scored 71 (third game back after his hammy) and 147 on the Tigers last year and even posted 127 and 115 before that. He’s running hot and is a perfect VC option on Thursday night. In fact, he’s the best.

Even though Brodie Grundy struggled last week with 84, he’ll bounce back here. As I said last week, he started round one last year with 84, but bounced back with 127 in round two.

Dusty Martin v Collingwood @ the MCG – 81 last week was a disappointing start for Dusty. He scored 54, 80 and 101 on the Pies last year. Not a captain but a possible trade!

Jake Lloyd v Adelaide @ the SCG – 10 marks for his 126 was the perfect start. Amazingly there are two teams in the league that Jake has never scored 100 against…. The Crows and Suns.

Seb Ross v Essendon @ Marvel – 82 last week was Ross’ lowest score at Marvel in his last 12 games. He scored 143 on the Bombers last year and after Coniglio (161) and Taranto (137) smashed the Bombers last week, I’ll back Ross to turn his start around here.

Steele Sidebottom v Richmond @ the MCG – 84 in the opening round. Not for me.

Rory Sloane v Sydney @ the SCG – If you don’t tag Sloane he’ll monster you like he did to the Hawks when he posted 144 last week. 153, 109 and 112 are his last scores against the Swans, so surely Hewett will get the call up to stop him this week. If not, here comes another 130+.

Tim Taranto v West Coast @ Optus Stadium – 114 and 104 are his last two scores on the Eagles, and should be good once again.

Patrick Cripps v Port Adelaide @ Adelaide Oval – Only played Port four times in his career for scores of 106, 121, 115 and 128. Very impressive and will be awesome here.

Patrick Dangerfield v Melbourne @ GMHBA – In his career 12 games against the Demons, his best scores are only 117 and 110. He had 103 last week and 85 on these guys in the Elimination Final last year.

Angus Brayshaw v Geelong @ GMHBA – 100 last week was solid enough, but his last two scores against Geelong aren’t much good …94 and 88. Could be a whipping boy for those who want Rocky.

Nat Fyfe v Gold Coast @ Metricon Stadium – Ready for this. 32 touches last week for his 103 was a nice warm-up for Fyfe. He dominates the Suns and will again. With scores of 144, 132, 121 and 119 next to his name in his last four games – expect something special again.

Dom Sheed v GWS @ Optus Stadium – Never scored 100+ v the Giants but then again, he’s playing like he never has before. 133 last week and on fire at the moment.