Does the addition of RUC status make Westhoff more relevant in 2019? 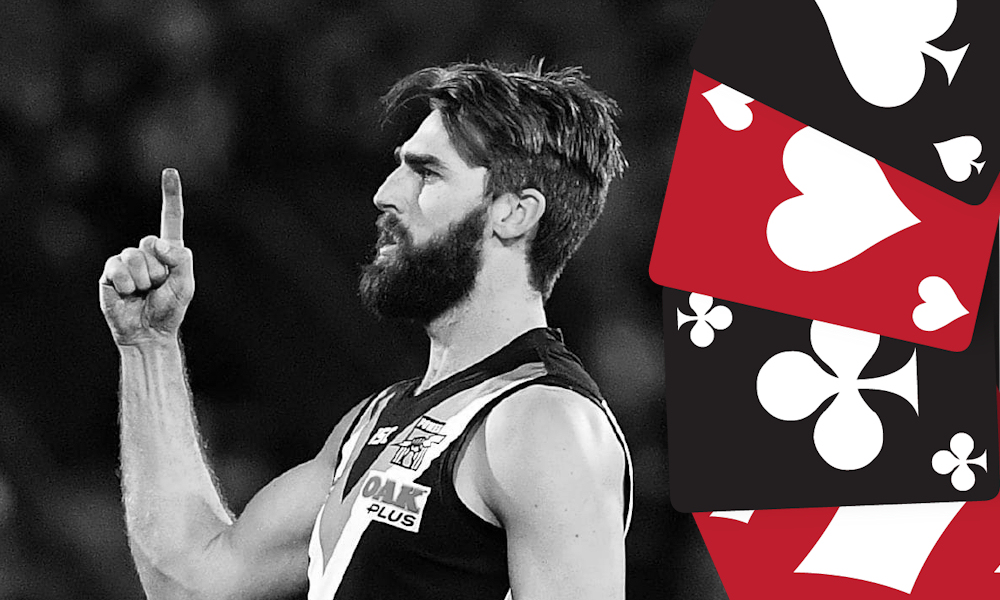 Westhoff announced himself as a fantasy stud last season, averaging over 100 or the first time in his career, one of only three forwards to crack triple figures on the year. It was a breakout that most of us weren’t expecting (if you claim it you’re lying), but those who invested in the Hoff, even after his initial price bump still got a kick-ass deal. Even though there won’t be another 20 point spike in his production there are plenty of reasons to invest in Westhoff again this season.

Almost every coach plans on plugging ruck pig Brodie Grundy at their R1 spot, currently sitting in over 83% of teams created on DT Live’s Drawing Board. There is a genuine debate over whether Westhoff should be your second ruckman over the likes of Stef Martin, Max Gawn or perhaps even a discounted Matthew Kruezer. Including Westhoff, that quartet will fill up a bunch of R2 slots, but Westhoff’s DPP is a huge string in his bow. After helping coaches across multiple lines (FWD/MID) last year, the fact that Westhoff boasts Ruck and Forward status this season is a massive tick in my eyes.

Not only did Westhoff score at a high clip last year, but he was super consistent throughout all 22 games. A low score of 75 in 2018 came in Round 3 against Stef Martin who recorded an insane 177 with 49 hitouts. Aside from that contest, Port’s versatile big man only went under 80 on one other occasion (against the Suns in Round 9) and showcased a huge ceiling by chalking up eight scores over 110.

Some coaches might be scared off by Port Adelaide securing Scott Lycett in the trade period, but I’m of a different belief. Westhoff averaged a career-high 8.3 hitouts last year, but the stat that gives me faith in Westhoff replicating a top-5 ruck season was his huge boost in tackles. For the first time in his career, the Hoff chalked up over 100 tackles going at nearly five a game. Couple all of the above fancy numbers and stats with the fact that he has missed only one game (ONE GAME!!) since 2012 and Westhoff looms as the perfect sidekick to the ruck pig in Classic this season.

Crap, did I just jinx him?

While I’m not too worried about the Paddy Ryder/Scott Lycett combo eating into all of Westhoff’s production, it still needs to be mentioned. Going off the ‘Predicted Best 22‘ piece Warnie put together a week ago, Port plans to utilise all three big men starting in Round 1. If you take out last year, Westhoff has never had a season where he averaged more than three hitouts a game and if he is forced out of the middle and isn’t constantly around the ball, naturally his numbers will be in for a dip.

It is slightly worrying that Westhoff will start the season against some of the comps premier ruckmen as well. Last season, as I mentioned above he struggled in his lone matchup with Martin and the Power open the season against Max Gawn (Round 1), Matthew Kreuzer (Round 2), the aforementioned Stef Martin (Round 3), Todd Goldstein (Round 6) and Brodie Grundy (Round 7). While this might not be a huge cause for concern, if Westhoff plans on playing any time as Port’s go-to ruck choice he might have a difficult time putting numbers on the board.

While his elite durability is another plus you have to wonder how many more quality seasons Westhoff has. At the tender age of 32, with nearly 250 games of knocks and bruises under his belt, Port could opt to keep Westhoff closer to goal in order to prolong his career, a move that would once again hamper his fantasy numbers.

QUEEN – Seems about right for Westhoff at this point, with a healthy Ryder and Lycett’s arrival likely to eat into some of his production. That being said, if Westhoff isn’t forced to do the heavy lifting in the middle of the ground he should see a boost in his marks and goals, which could help him maintain a 95+ average. I expect him to hover somewhere around that mark and put forward another top-5 ruck season, and at this rate, he’ll start alongside Grundy for the Large Fry’s & Coke in Round 1.