With Gibbs gone, Roy is running out of ‘his boys’at the Blues but he thinks there is one young gun capable of filling the vacant stars shoes 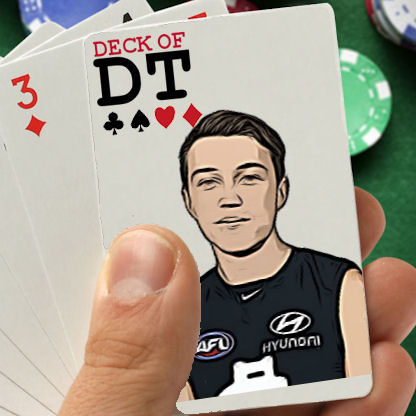 Patrick Cripps is the next best thing and with Bryce Gibbs in Adelaide and Sam Docherty out for the year… the rise to superstar status has been fast tracked to this year. Not only is Crippa enjoying his first uninterrupted pre season, he is doing it as a leader of the young club and thriving in the role.

Cripps is under priced based on his slow start (by his standards) to 2017 which was following an injury riddled off season that saw him enter the season under done. It took him five games to crack triple figures and then we saw a preview of what is to come from round 1 this year.

Between rounds five and 15, the future captain was truly elite with eight hundreds and an average of 108. In that time, four scores were over 110 and included a thumping 143  from 30 possessions, 11 marks, five tackles and two goals.

The clearance specialist is coming into his prime after being in the system for four years. His last three averages are elite among players in that age bracket with figures of 86, 99 and 98 and there are enough points in his favour to predict a significant leap this season.

He will be quite unique for a player who is so awkwardly priced and it’s always nice to be the coach that started with (the break out guy) rather than trading him in.

He will open the season with a game against the Tigers who he scored a nice 109 against in round 14 from 27 touches, eight tackles and a goal.

To be honest, there aren’t many reasons not to give Crippa a run in your starting squad this year, but I will try and find something.

Although historically he has shown solid durability, he has never played a full season and has missed 10 games over the last three years, but of course seven of those were last year.

Although he traditionally  copes well with a tag due to being a contested beast, he will be the focus of many opposition taggers this season and is lacking the support of a couple of his senior teammates this year in Doc and Gibbs which will test the young gun.

KING – In round 16, he was injured on 40 which is of course  included in his season average and therefore price. Therefore you can purchase a young star on the rise for an average of 98 when he in fact averaged 103 without a pre-season. The sky is the limit and he could in fact push 110.