Calvin has Barlow as a top 3 forward in 2018, despite his run of injuries… do you agree? 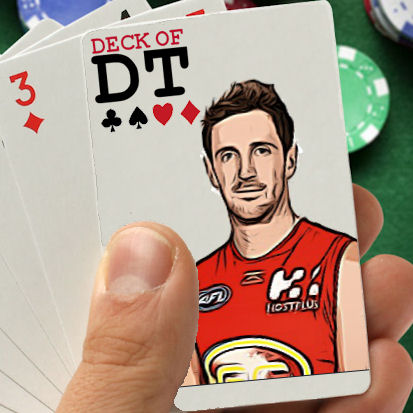 Although we don’t know exactly what their new coach has in store for the 30-year-old Fantasy veteran, we can say for sure… he is a Fantasy jet who has always performed well in the past, not averaging under 93 in his last SIX seasons.

With Gary Ablett gone (he went back to Geelong for those who missed it), surely this frees Barlow up for more midfield time. But then again, I reckon everyone has their eye on this time avaliable. With that said, surely this ball winning magnet gets a small increase… on top of what he was already going to get.

But with a new coach… will Barlow be back as a tagger? Honestly, this won’t bother me a great deal as when he was doing this role in the past he still was able to score. If he is tagging, he’ll be around the ball at least and his natural ball winning talent should hold him in a good position for our Fantasy teams.

Believe it or not but there will be people out there who will actually say this and sadly, even believe it…. And if by the one in a million chance he did, “told you” would be their response.

Anyway, if something went bad for our mate Barlow (for whatever reason) we have trades to burn. Maybe not to burn, but we definitely have two a week for reasons such as injuries.

Once again, like every year… we much employ the “Guns n Rookies” approach. Last year, we tried to justify the “Guns n Roses” angle just so we could roll with the likes of O’Meara, Roughead etc…. and to be honest it worked to some extent but you had to follow the players such as Heppell (early) or Marc Murphy for this to be classed as a success.

As the yeah went on, I traded hard following the Guns and Rookies approach only. I only traded players into my team that were going to be 99% locked into the best 6 or 8 in their position.

Barlow is a top 6 forward. Make no mistake about it.

From what we have available to us this year, that we’re in top forwards from 2017 are….

Barlow will be in that list again, and if injuries are your concern just remember that he hasn’t averaged under 93 in the last SIX seasons and that… WE GET TRADES.

Both if these are concerns for people who are looking to bring in Michael Barlow this year and after breaking his leg for the second time, you can easily see why people are concerned and looking in other areas.

I’m under the assumption that Michael has been drinking lots of milk…Strengthening his bones. Someone told me that!

This may or may not be true, but either way let’s be real here… how often does someone break one leg let alone two? He has had bad luck in this area and will certainly be hoping for a chance of fortune this year.

Draft: Barlow must go within the top 3 forwards in your Draft. The only ones I’d have around his scoring ability would be Menegola, Heeney and maybe even Buddy who had another cracking year to average 96 and hasn’t missed a game in two years. Heeney is there as a predicted improver from his 92 last year and Menegola must be there based on his 2017 average of 102 and for the way he closed out the season. The thing with him and why he might slip a little is of course his role and with Ablett coming in, this creates much more uncertainty.

Billings and Chad are interesting ones, but I’ll be backing in the guy who has the runs on the board.

KING – Thought about a queen here for this legend but let’s think about this… he will be a top forward and he will be highly sought after in Draft this year with his Forward eligibility.

Who gets drafted as the #1 option here from what we have available in 2018? Have your say below…