It’s a short and sharp Juniors this week. Nothing is missed and all the hard hitting questions are answered by our rookie guru. 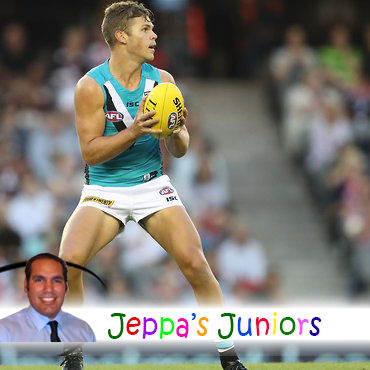 We are in no mans land at the moment. We can’t trade our cash earning rooks cause it’s too early but plenty of us a desperate to make an upgrade on field. What’s worse is that there are very few new rooks coming through. I’m rage trading Roughead to a premo mid but I need a cheap rook to make that happen. Fingers crossed a Polson or similar is named to debut.

The advice this week is to hold your rooks earning you cash. Guys like Stewart and Pickett have been flops with their scoring potential so if you want to rectify those spots with better juniors then feel free to do it.

It’s a short n sharp Juniors article this week but make sure you leave your questions if you need something specific answered.

Zac Fisher (Mid. $212,000, 11 be AF. $125,300 DT) looks the goods. He’s an elite kick and his pressure on the opposition was super impressive. He’s expensive but he’ll get plenty of opportunities at Carlton this season and you should look to trade him in.

Dan Houston (Fwd. $309,000, -3 be AF. $274,600, -6 be DT) started on fire against the Giants. At quarter time he was sitting on a whopping 49 but couldn’t maintain a decent scoring rate for the remaining three quarters. 82 Fantasy points is still a great score and he’s been one of the best cashcows this season.

Harrison Wigg (Mid. $150,000, 25 be AF. $132,400 DT) – An eye injury to Jake Kelly last weekend could mean that Wigg finds a home in the Crows 22. Kelly and Wigg are quite different players but I’m hoping a couple of role changes at Adelaide gives Wigg an opportunity as a running half back. Last weekend in the SANFL he impressed with 23 kicks, 7 handballs, 7 marks, 2 tackles and 107 Fantasy points. He’s an elite kick and he’ll fit seamlessly into the Crows style of play. Wigg’s job security should be perceived as a risk though.

Dallas Willsmore (Mid. $150,000, 25 be AF. $132,400 DT) – He’s not a big tackler but he definitely knows how to find the footy. Willsmore is a tall, outside mid that is a good chance to line up for the Hawks this weekend. With the Hawks possession style game plan, he could rack up some handy numbers and Fantasy scores but with the way rooks have gone this season, don’t expect miracles. Bench warmer only.

Guesses at a basement Def rookie to debut?

Lewis Melican from the Swans or Ed Vickers-Willis who had a lot of the ball in the VFL on the weekend.

@JeppaDT Need to downgrade to a rookie to generate some cash. Can you let me know which is the best option in each position? #JeppasJuniors

@JeppaDT Worth trading Nankervis to Soldo and moving Preuss to R2? Need the cash and they have the same average. #JeppasJuniors

Goldstein is fit and firing again so Preuss won’t have the time in the middle to score well so NO.

I won’t be surprised if Hampton is dropped but we’re all hoping he’s not. Myers will be playing in the VFL this week.

Who to bench from Taranto, Balic and Butler? #JeppasJuniors

We should be chasing any player making cash. I picked up Neal-Bullen and I’m upset I didn’t pick up Ryan Burton.

@JeppaDT Trade put Parsons as he is suspended for 2 matches?? #JeppasJuniors

Hold him if you can.

#JeppasJuniors For those still holding GHS, is is it time to stick or flick?

Stick if he’s named to play this week which I expect he will be.