Another week of footy action sees many ‘juniors’ worthy of a mention. There are a handful of rooks that we all own but which affordable ‘juniors’ are the diamonds in the rough? Have a read and find out. 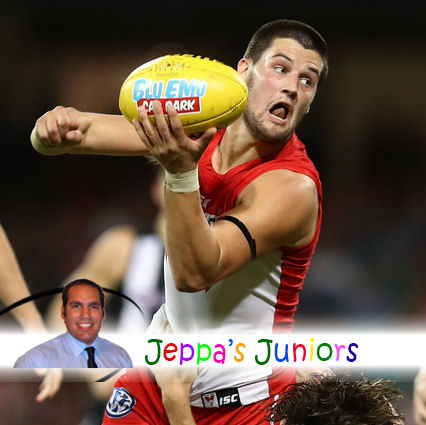 Every upgrade needs a downgrade and if you’ve planned well then this is the first week for a Fantasy upgrade. For me, I’ve got in excess of $180,000 in the bank and Roughy is on my chopping block. The midfield rooks are lacking so with some DPP action it’s Gawn and Roughy to Murphy and Hanners. Lock and load.

Round 3 was a trying week for many Fantasy coaches after plenty of under performing rooks. Patience is going to be a virtue this season and I think it definitely pays to spend that little bit more on quality youngsters.

Nic Newman (Def. $223,000, -31 be AF. $132,400, -99 be DT) is looking sensational. Playing his customary half back role, Newman is heavily involved in the Swans structures and his left foot kicks are like darts. He finished with 23 possessions, 4 marks, 4 tackles, 1 goal, 93 Fantasy points against the Pies and is an absolute must have. The non-owners should not waste any time bringing him in. Make sure he’s starting on your field.

Tackling machine Robbie Fox (Mid. $179,000, -5 be AF. $109,300, -47 be DT) had a decent game for the Swans last Friday night. He plays like an old fashioned, inside mid and had a notable 7 tackles to go with 69 Fantasy points. He’s still cheap enough to trade in but proceed with caution because there are no guarantees with his job security and he’ll hit a sub 50 score quite often. Bench back up at best.

Will Hoskin-Elliott, 94 (Fwd. $374,000, -11 be AF. $343,200, -33 be DT) is hitting premo like scores and it’s enjoyable to watch as a Fantasy coach. Is it too late to trade him in? Absolutely not especially with the lack of cashcows available. WHE has a negative breakeven and is full of confidence.

Big unit Braydon Preuss (Ruc. $273,000, -38 be AF. $224,100, -89 be DT) has been North’s main man in the middle for the past two rounds and he’s tonned up both weeks. Goldstein is clearly playing injured but when he shakes the problem then Preuss’s scoring ability will be hindered severely. In the short term, I reckon Preuss scores 75 plus Fantasy points per game so feel free to start him on your field if that’s your strategy with Gawn out.

Riley Knight (Fwd. $308,000, 12 be AF. $251,300, -13 be DT) is someone I should have mentioned in previous weeks. Knight qualifies as a rook given he started under $250k in Dreamteam. I thought he was great against the Power with his gut running and 80 Fantasy points and he’s been very consistent across the first three rounds. Decent job security is a big plus too but given his price, Knight is Dreamteam relevant only this week.

Brandan Parfitt (Fwd/Mid. $244,000, -2 be AF. $180,000, -44 be DT) clearly had his best game of the season. Having won 13 contested possessions from 23 total is a great sign from a first year player and he goes up a couple of ladder rungs for job security at Geelong as a result. Scoring 90 Fantasy points for his owners comes at a handy time and against an indifferent Hawthorn team this Monday he could produce another decent game. I’m trading him into my Dreamteam this week.

James Parsons (Fwd. $167,000, 2 be AF. $125,300 DT) is some fresh meat to take note of after scoring 62 Fantasy points from 18 possessions, 3 marks and 2 tackles. Active for the Cats up forward early on, Parsons looks a likely type but the problem for us is that he has no assured job security. I worry that Lang or Horlin-Smith will take his spot but in saying that, there are few cheap options available this week. A risky pick.

Carlton ‘junior’ squad leader Sam Petrevski-Seton, 93 (Mid. $304,000, 5 be AF. $253,500, -20 be DT) was firing against the Bombers. SPS’s tackle numbers were up due to the wet weather and he did plenty to keep the ball moving forward for Carlton from the stoppages. He’s growing in confidence every single week but is out of reach due to price in Fantasy. I got lucky and picked him up in Dreamteam last week purely for his job security. Caleb Marchbank (Def. $295,000, 7 be AF. $284,700, 7 be DT) had a tough outing as a tall defender in the wet but he still managed to reach a respectable 67 Fantasy points. He’ll go pretty well against the Suns under the roof at Etihad this week!

Tom Williamson, 67 (Def. $169,000, -2 be AF. $125,300 DT) didn’t die wondering in his AFL debut. The athletically gifted rook looked super comfortable both on the flanks and in the midfield for the Blues. He finished with a respectable 15 touches, 2 marks, 5 tackles and 67 Fantasy points. We need to take advantage of a rookie listed Fantasy defender who is playing in the midfield. I don’t think he’ll be a huge scorer but he’ll have the opportunities at Carlton and that’s pretty important considering the lack of cheap options available.

Cameron Polson (Fwd. $150,000, 25 be AF. $125,300 DT) – Cheap as chips Polson could get a run for Carlton in the coming weeks. He’s coming off a 27 possession and 90 point Fantasy game in the VFL and would provide the Blues with some great tackling pressure in the forward half. He might come in at the expense of Pickett though so stay tuned.

Is Williamson the real deal? Played a blinder but only scored 67, is worry about his potential warranted? #JeppasJuniors

I like him but there will be some rollercoaster scores. We should be bringing in players with healthy job security, which he has playing for Carlton.

do we pull the trigger on the likes of Miles and Eddy?

Eddy can go if it’s a luxury trade but I’d hold Miles for a bit longer.

I would love Petrevski-Seton in my Fantasy team but my strategy wont allow me to.

Should we hold Berry #JeppasJuniors

If you traded him in last round then you must persist with him this week.

No mate, not yet. They’re gona earn plenty more cash.