Tom is back putting players head-to-head in Versus. Today he looks at ruckman. 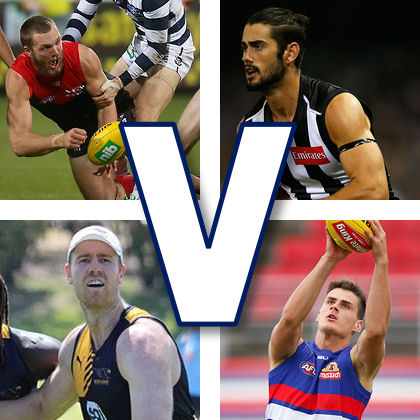 Tom is back putting players head-to-head in Versus. Today he looks at ruckman.

What a season big Maxy had in 2016. He went from being an occasionally decent ruckman to premium big man in the space of a year. Gawn also further pressed his case for out-and-out cult hero status, not only amongst Demon fans but all AFL lovers. But it didn’t start the way it ended. In the Demons surprise round one victory over the eventual preliminary-finalist GWS, Gawn gathered 14 disposals, 4 marks and 26 hitouts for a Fantasy score of 78. Despite recording 31 taps against the Bombers the following week, Maxy managed just 10 disposals, leading to 61 points. However it only took one massive round for his season to really get rolling. Unfortunately for the Kangaroos, they were on the receiving end of one of Gawn’s signature matches where he collected 18 disposals, 63 hitouts and scored 116 points battling it out with none-other than Todd Goldstein – perhaps at the time the best ruckman in the league. Mind you, Goldy’s 38 taps, 19 disposals and 5 goals were a huge factor in the Kanga’s win. However unlike Goldstein who endured a poor year by his lofty standings, Gawn’s season continued to build consistency. His renowned high ceiling was also starting to translate into regular scores of over 110. In fact, this occurred ten times throughout the year. Although the Demon’s form was fluctuating faster than a teenagers mood, Gawn continued to maintain his output, granting Viney and co. with exclusive access to the footy. The most notable of Gawn’s big scores came in round 12 when the Dees met the Pies. He was able to find the ball 27 times and snag three majors for a score of 146 – his highest for the year. There really isn’t anything special about Gawn. He’s your typical ruckman, 208cm, 111kg, big and strong. But 2016 truly was a special year for the bearded big man. It was capped of by inclusion in the All-Australian squad, a third place finish in Melbourne’s B&F and 16 votes at the Brownlow Medal. He comes at a cost but is the best in the business in his department.

In a way, Grundy’s career-best year was almost overshadowed by Gawn’s. It would be a big shadow too! Like Gawn’s, Grundy’s season didn’t get of to the best of starts. Heck, he wasn’t even picked for the round one encounter with the Swans at ANZ Stadium. He was, however, included in the Pies side for the following match where he managed 16 hit-outs, 17 disposals, 2 goals and 91 Fantasy points. Most will remember this particular clash by the match-winning goal which was kicked by Grundy with seconds remaining in the forth quarter. A similar output came in round three before he cracked the Fantasy ton for the first time in 2016 against Gawn’s Demons. The final match in Collingwood’s month-long stretch of games at the MCG yielded 92 points. At this point, Grundy’s season looked destined to reach similar heights as 2015 where he averaged 91 for the season. It looked even more likely to result in another decent season when he managed two hundreds in the next seven matches. But things finally changed direction against the struggling Dockers whose midfield was being carried by Lachie Neale thanks to the season-ending injuries sustained by stars Nat Fyfe and Aaron Sandilands. It took 34 hitouts and 18 disposals to hit 105 points – hardly a massive score but enough to trigger a flurry of tons. In fact, seven tons in the remaining nine games to be precise. This run included 127 against the Eagles, 134 against Sam Jacobs and Adelaide and 139 against the Suns. Grundy did enough to lift his season average to 100 and the SA-born product will be looking for more in 2017 as the Magpies enter a do-or-die year. Brodie Grundy is a quality tap-ruckman who is a physical presence around stoppages or up forward. He comes in at $609,000 but could he continue to improve his Fantasy ability?

Verdict: For me, this comparison comes down to whether you think Gawn will average more than Grundy to justify the extra $30k. Different coaches will have varied opinions on this but personally I believe Grundy will continue to go from strength-t0-strength and match Gawn over the coarse of the season. Therefor, I would pocket the extra cash and lean towards Grundy who, although may not rack up massive hitout numbers, finds more of the ball around the ground.

As Eagles fans collectively held their breath at the sight of star tap man Nic Naitanui sercuming to a serious ACL injury during the round 22 clash with Hawthorn, the smartest of Fantasy coaches would have penciled in Jonathon Giles name as one to watch. Despite featuring just three times in 2016, Giles, who has been a member of four clubs, made a big impact in round 23 at the Adelaide Oval. It was set to be the game in which the Crows cemented a place in the top four with a home victory. But they never got going and Giles’ Eagles won the of the birds, effectively ruining Adelaide’s season. It was Giles one-on-one win over Sam Jacobs which really set up the night. He completely eliminated Jacobs’ presence and managed to collect 15 disposals, 4 marks, 3 tackles, 29 hitouts, a goal and 90 Fantasy points from 73% TOG himself – not bad for a back up ruckman. However Giles is no certainty to claim the number one ruck role in the wake of Naitanui’s injury. The acquisitions of former Cat Nathan Vardy and veteran Drew Petrie has set up an interesting battle for a spot in Adam Simpson’s lineup. Vardy is a more athletic, mobile tall, capable of covering the ground well whilst being rotated through the forward line. He is said to have been training the house down but take that with a grain of salt. It remains to be seen who will win that internal battle but I would back the experience of Giles at this stage. On top of this, fellow ruckman Scott Lycett has recently started to train with the main group and is said to be eyeing off a return in the early stages of the 2017 season, adding further risk to the selection of Giles. Unlike Vardy, Giles has had a Fantasy relevant year, back in 2012 where he averaged 81 as the Giants leading ruckman. If he can fend off in-house competition, solidify a starting place and average a score of around 70-75, then a price tag of $348,000 would be justified. By no-means a season keeper but could prove to be an excellent stepping stone. Monitor the Eagles big men during the JLT Series.

Coming into the 2016 season, Tom Boyd continued to attract criticism from the footy world for his inability to justify the $1m salary he was granted with after moving from GWS. However as the final siren sounded on Grand Final day, bringing an extraordinary season to a close, Boyd was the proud owner of a premiership medal and many still believe he deserved the Norm Smith Medal over speedster Jason Johannisen. The number one draft pick from 2013’s National Draft didn’t set the world on fire during the home and away season, averaging just 59 Fantasy points. Injury and form issues saw Boyd banished to the Bulldogs VFL affiliate Footscray between rounds 5-15 and he was due to be recalled by the Dogs for the top eight clash with Hawthorn however this return was postponed to round 17 after Tom was involved in a training altercation with teammate Zaine Cordy. But in a sign of mental strength, Boyd hit back with four goals for Footscray a week later. After eventually regaining his place in Luke Beveridge’s best 22 for the game against the Gold Coast, Boyd managed to play out the rest of the season. He kicked 3 goals to go with 18 disposals, 4 tackles, 5 marks and 88 Fantasy points against the Cats in what proved to be his best performance of the regular season. Many believe Boyd will draw plenty of confidence purely off the back of a heroic performance on the biggest stage of all. It is games like this which make the world of difference to players like Boyd who run on confidence. It’s pretty simple with Tom Boyd. If you pick him at R2 instead of a Gawn or Grundy your saving $300k. If you use his handy FWD DPP, transferring him from the forward line, into the ruck could prove to be a very handy weapon. However he does come with risk. Let’s be frank, he is yet to score a ton and has never before shown real Fantasy ability. With the addition of Cloke, a refreshing dose of confidence and the potential to spend more time in the ruck, do we get Boyd the boy or Boyd the man?

Verdict: The appeal of selecting a mid-priced ruckman can, and often does, end up coming back to haunt Fantasy coaches. This year, we are blessed with the likes of Toby Nankervis, Jarrod Witts and of course Giles and Boyd. There will always be risk involved when it comes to mid-priced rucks who seem to present good value until round four roles around and they are still yet to crack over 80. I personally am more of a set and forget man but in this comparison I prefer Boyd because of his potential to improve, DPP, youth and new found confidence.