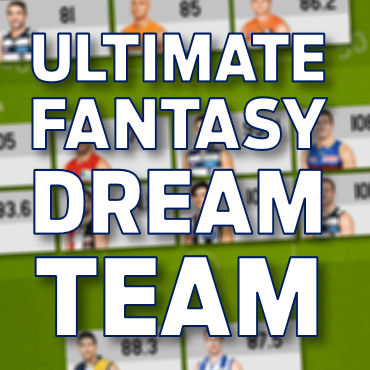 While researching for the upcoming season of Fantasy Football, I have spent a lot of time pondering who will be the best six defenders, or eight midfielders at season’s end. While daydreaming about my theoretical finished team, I got on to thinking about what the greatest ever Fantasy/Dream Team would look like. No salary cap. No trades required. No bye structure to take into consideration.

Here are some rules I made:

Also a big shout out to www.finalsiren.com for the DT stats

So starting from the defenders, here is my ‘Greatest Ever Dream Team’

Unlucky to miss out, but still deserves a mention

NB – Turns out it is really hard for a big man to stay on the park! Durable, consistent ruckman over a long period – they don’t grow on trees! Sam Jacobs and Jeff White were probably next in line.

Special mention to DT guns, Matthew Pavlich, Adam Goodes and Ryan O’Keefe who were strongly considered for the team, but just missed out.

Well that was one very enjoyable article to write. It was great fun taking a trip down memory  lane and get reminded of the guns of yesteryear, while also learn about other players who I wasn’t so familiar with. I must admit it was a tad hard to try and normalise all the data to be able to compare apples with apples , I’m not exactly a mathematician when it comes to these sort of numbers. It was also great to see how the game has evolved over the time from a efficient, Key forward orientated game, to a free flowing, slingshot, high possession game we see today. This has obviously shown in the rise in DT averages over the years. In 2003, the top 50 players, averaged 88.8. In 2016, that figure was 103.6.

This is obviously “my” greatest team and it is a very subjective  thing to talk about, but will hopefully generate some good discussion. Would love to hear your thoughts on which players I missed out, which players should and shouldn’t be in my team. Hit me up on @jimbobholder on Twitter.

Big thanks to Rumballz for the pics! Legend!

AFL Fantasy 2017 is open!
The Least Picked Players in AFL Fantasy and Why You Should Pick Them