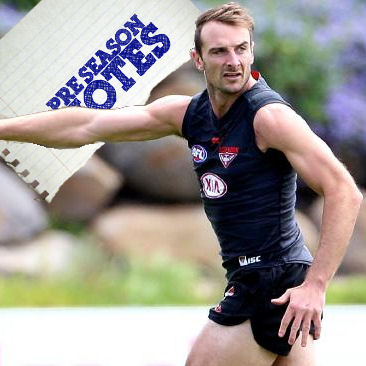 #AFLFantasy kicks off for season 2017.

Essendon are aware that their returning players are a high risk of soft tissue injuries as their workloads are managed. Jobe Watson was unmissable in match simulation as he looks set to spend more time closer to goal.

“He’s been pushing forward – we had a little bit of match play today and he kicked a couple of goals,” performance coach Hayden Skipworth said after the two-hour session.

“He’s impacting in the midfield and forward at the moment and he’s in a really good headspace as well.”

Andrew McGrath could play round one.

“There’s no pressure on him to play round one, we’re just slowly building him into the program as well trying to limit his risk of injury,” Skipworth said.

“He’ll be right around (the mark for) selection round one, that’s for sure.

“I’m working on – run and carry off half-back" Watch Jacko talk about his new move to the backline: https://t.co/rwdQNwQQS7#DonTheSash pic.twitter.com/iExtftYVRo

Carlton captain, and mid-priced Fantasy bargain Marc Murphy (MID, $482,000) has missed just one training session in the last three months and is ready and raring to go. He’s keen to get back to his best – and we all know what that is in Fantasy… 111.4 average from 22 games in 2011. A high 90s average would be great. Look out for Roy’s Deck of DT on him tomorrow.

“I’m 29, but feel like I’m 22 at the moment, and I’m really excited to get stuck into these pre-season games in four weeks’ time,” he said.

Lycett to return early in the season

Adam Simpson said at his presser today (see below) that Scott Lycett will return in the early part of the year, maybe not round one, but pretty close to it. Cross off Giles/Vardy… and also think about drafting Lycett late. Could be a good pick up!

Nick Bowen is reporting that Shaun Atley (DEF, $356K) will move into the midfield this season. He has trained with the midfield group all pre-season and impressed on a wing in a full ground trial match. Note that he hasn’t scored a Fantasy ton in his five year career. Also impressing in the intra-club match was Ryan Clarke (MID/FWD, $293K) – among others.

Todd Goldstein was in the group that trained away from the players involved in the game.

From all reports, Jobe Watson ran through the midfield racking up plenty of clearances. Looks as though this will be his predominant role, despite talk of forward time. Zach Merrett and Dyson Heppell were also busy. Cale Hooker missed with hamstring tightness while Joe Daniher and Tom Bellchambers are managing knees. Michael Hartley hurt his hamstring in the game.

Bennell hungrier than ever

Harley Bennell is building up his fitness since heading to Germany about his calf. While he is yet to join the main group, the Dockers say he will play a great deal of footy this season.