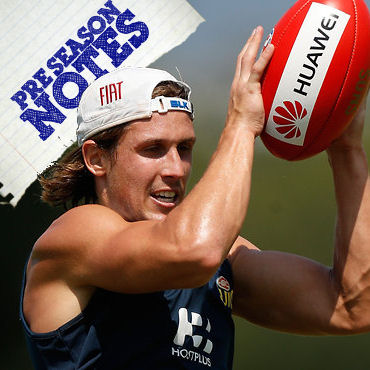 Sandilands has done a calf

With the size of him, it’s more like a full-blown cow, but Aaron Sandilands is set to miss the start of the JLT with a calf strain. Harley Bennell is still building up his running.

Rodney Eade says that both Jack Bowes and Ben Ainsworth are well placed to debut for the Suns in round one. Jack Scrimshaw and Will Brodie are facing later starts to their AFL careers. Eade also notes that David Swallow is likely to be managed at some stage during the year but has had a full pre-season and will play every JLT game.

Berry out for six

Popular draftee in Fantasy, Jarrod Berry will miss up to six weeks after undergoing knee surgery. He is expected to be available late in the JLT Community Series. Probably means he won’t be a round one starter. Cross him off you list but remember his name as a downgrade target.

Luke Hodge was on RSN this morning talking about how Tom Mitchell being the most competitive person he has seen at each stoppage drill this pre-season. He also mentions Isaac Smith, Liam Shiels and Luke Breust are the blokes who will step up following the loss of Sam Mitchell, Jordan Lewis and Brad Hill.

New DPP alert! Rodney Eade said on SEN this morning that Gary Ablett will spend 60 per cent of game time in the front half of the ground. All match simulation has been done as a forward as he is still recovering from shoulder surgery.

Rocket says that Bowes and Ainsworth will push for Rnd 1 selection. Brodie mid-year, and Scheer and Scrimshaw at the back end.

Rocket also declared that a tagging / high half-forward role is likely for Barlow, which is similar to his Freo role. #questionmark

Nathan Buckley told AFL.com.au that the club is excited about how Matt Scharenberg is tracking, but he would be given plenty of time to settle back into playing football. He will be one to watch over the JLT Community Series as he aims to secure a round one berth. If he’s playing JLT, things are positive as Buckley said they’re looking to select strong sides in their matches.

Cross Collingwood’s father-son recruit Callum Brown off your pre-season watchlist. He will be out of the mainstream program for the “next few weeks”.

The weekly podcast is back

As we do on a Monday evening for the footy season, Roy, Calvin and I jump around three microphones and chat Fantasy footy for an hour (well, take out the news, weather and promos we play on City Park Radio). This week we chat to Dayne Beams who is a certain starter and also to Jack Ziebell who drops some names for us to consider from the Roos. Click here to subscribe on iTunes.

Mumford to miss a month

GWS ruckman Shane Mumford had elbow surgery last week and is expected to miss the early stages of the JLT Community Series. This shouldn’t affect his availability for round one.

“The surgery was a success and we don’t expect Shane to have any ongoing issues,” Joyce said.

“Shane has had a really good pre-season to date and has hardly missed a beat, so we’re confident this shouldn’t affect his preparation for the premiership season.

Ross names Billings as the one to impress this year

Seb Ross said that Jack Billings has taken his fitness to another level and that he expects to see him shine in the JLT. He also mentions that Jack Steele is in good shape, but it has been hard for him coming off a foot and also a wrist injury.

Swallow on track for JLT

24-year-old Sun David Swallow is on track to play his first game since mid-2015 after a PCL injury during the JLT. He returned in the NEAFL last season but a hamstring injury put him on ice for the rest of the year.

“I have been doing full training for most of the pre-season after initially being eased into it,” Swallow said.

“I’ve been enjoying the match simulation stuff and getting some more midfield minutes.

“I have to make a bit of a plan to see how much I play over the pre-season competition and leading into round one so it’s been all positive. I just have to keep working on the tank and keep looking after my body as much as I can.”