Gaff is certainly priced well below his best. Should you start him? 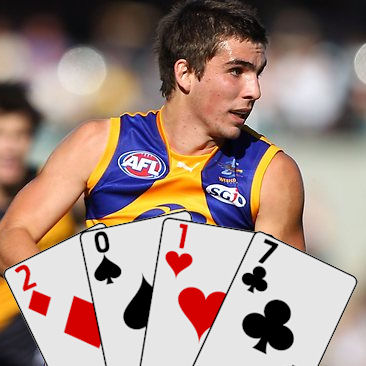 A week or two back I profiled Sam Mitchell in the deck of DT, and touched on the impact his arrival at West Coast would have on the current group of midfielders under Adam Simpson. Firstly, I can almost guarantee that one of the current Eagles mids (Gaff, Priddis, Shuey) will have a career best year in terms of Fantasy output. Whether it’s the inevitable opposition attention Mitchell will attract or just his presence and leadership around the ground, the effects of such will propel at least one of the other three main men into career best territory. Personally, I think it will be Gaff.

Mr Gaff is the ultimate outside midfielder. The way he roams around the ground and accumulates uncontested possessions is remarkable. In 2016 he was ranked second in the entire competition for doing just so. If you choose to start with Gaff you can be relatively sure he will deliver solid returns from the word go. In 2016 Gaff went under 85 on just 7 occasions, however this was (in my opinion) as a result of the ugly collision with Port Adelaide’s Tom Jonas whilst he was heroically going back with the flight of the ball. Due to this nasty hit, Gaff posted an injury affected 44 points and missed his first game in years due to the ongoing concussion effects. When he returned in round 11 he did not look himself at all and understandably it took him a few games (round 15) to register a score over a ton. Admittedly 2016 was not his career best year, dropping by roughly 10 points from 2015, however as I said above, this can be explained by watching this……

Jesus McChrist!! Anyone that can cop a hit that hard and come out firing after a week off is kidding themselves.

Another sweet reason to pick Gaff up round one is his price in comparison to the other West Coast mids. Shuey is over 30k more and I’d pick Gaff over him anyway. Sam Mitchell is a touch over 600k and although a proven gun, he will receive far more attention from opposition teams than Gaff will, and finally Mr Reliable Matt Priddis sits at a lofty 623k (which for him is about right because he’s as solid as they come). The only reason Gaff is as low as he is right now, is because of the aforementioned trip into outer space he went on courtesy of Tommy Jonas. He’ll score tons early and can quite easily make you 25 – 30k which you can then use to offload him to another ‘fallen’ premium if you so choose, however keeping him for most or all of the season (if I’m right about the “Mitchell Effect”) might just be the way to go.

This is the best part……

In a recent interview Gaff has publicly stated it is his goal this year to spend more time in the guts helping out the three bulls in Priddis, Mitchell and Shuey. Truthfully his inside game isn’t his strongest point and dear lord his tackling numbers are frustratingly low but this news is the cherry on top of an already exciting and underpriced fantasy prospect. So how will he achieve this you ask? Well, over the summer Gaff has increased his gym work with the intention of adding a few kilos and therefore potentially increasing his inside game. Moreover, he stated his second “goal” for 2017 was to do just that, kick more goals….

“Goal kicking midfielders are hard to come by and its part of my game that I want to keep developing” – Straight from the horse’s mouth.

Gaff is unquestionably a superb AFL player, however, in my view the reason he is yet to fully cement himself as an uber premium Fantasy player is due to one area of his game. Tackling.

I touched on the fact he wants to bulk up a bit more this year and I’m hoping like hell this sees him tackling more but the answer is so much simpler. Forget the gym mate, here’s what you do. Walk over to the ridiculously well tanned man with curly blonde hair and ask “Hey Pridda, teach how to tackle, teach me, teach me how to tackle”.

I’m clearly exaggerating the point here but I think it’s that simple. You’ve got the best in the business sharing the same locker room as you, just ask him for a quick “how to” and you’re as good as Blue and Gold. Simples.

Critics will argue that an outside midfielder’s job isn’t too tackle. Pish posh I say, an AFL player’s job is to become a jack of all trades. Essentially that’s what separates the good from the great.

If I’m wrong and his gym work doesn’t increase his tackling count, and also that somehow Sam Mitchell’s arrival decreases his Fantasy output (really…), then I’ll graciously eat my words. Until then, get him in.

VERY STRONG KING – The main reason Gaff is locked in my side is the overwhelming faith I have in the “Mitchell Effect”. Gaff has always had superb players feeding him the outside ball but this year he has not one, but two Brownlow Medalists and the always underrated Luke Shuey who is a gun in his own right, doing so. Would you pick a bigger, stronger, well supported and more determined Gaff than ever after last year’s early exit from the finals?

FOLLOW ME ON TWITTER: @leighroyDT for all things AFL Fantasy (and more). Got something to say about the deck? Use the hashtag… #DeckofDT.