JimBob looks at one of the value big man options at West Coast who can fill the void of NicNat in the ruck and ‘stick’ it to the man. 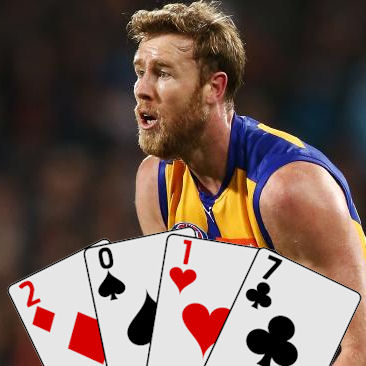 When the door closed on Nic Naitanui’s 2017 season back in round 22 last year, it immediately opened up for the journeyman Jon Giles. Picked up from Essendon at the end of the 2015 as insurance to Naitanui and Scott Lycett as insurance, West Coast cashed in on that policy in Rd 23 last year when Giles went and monstered Sam Jacobs for 29 hitouts, 15 disposals, a sausage roll and 90 fantasy points on a meager 73% TOG. Then again the photo below may explain a lot more as to why he won the battle against Jacobs, Giles came from three lengths back and reminded everyone that he can still play, and gave us West Coast fans a rather large false sense of security at the same time.

Fast forward to 2017.With Naitanui only just starting back at running drills and Lycett still training with the rehab group, Giles should definitely be the front-runner as the #1 ruck with either Vardy or Petrie to be the backup read; more midfield time! If we cast our minds back to 2012, Giles averaged a very handy 82 points over 20 games which included 6 x 100s, so there is history that he can sustain a good score over a whole season. Giles maintained relatively good form in the WAFL last year, averaging 80 ppg While he is in NO way a keeper, a solid 11 round run to his bye in round 12 could prove him to be a more than handy pick.

One of the  more compelling reasons to consider Giles this year is if you decide to run the gauntlet of the cheap priced ruck strategy, as opposed to a ‘set and forget’ mentality. In previous seasons gone by, trying to predict the top two rucks of the upcoming season has been harder to pick than a broken nose. How many guesses would you of needed before Max Gawn and Brodie Grundy came up in 2016? And can you guarantee that they will be the top two rucks this coming season? If picking the top two rucks is more luck than judgement, then picking value ruckman like Giles until the contenders rear their ugly head may be a good way to go. While it is yet not known the impact of no third-man up rule will be, the ruck line is arguably the least relevant line of the four in terms of player average and therefore the line to take the most risk on. Following on from this, that cash can be spent on more blue chip pick in other lines.

Well, he has been at four clubs. While it is nice to point out that Giles averaged 82 points from 20 games in 2012, it would be remiss of me to not point out that he averaged 67 points from 22 games in 2013, and has only played 15 games in the last three years. Analysing the two years he played full seasons, the only major change was his disposals and marks which fell by four and two per game respectively, with all other stats remaining relatively constant. If Giles job is to give the mids first use and not be used in any link up play, then he may not present any value at all.

Giles is also not an absolute lock to get the #1 role if West Coast opt for a more mobile type of Ruckman like Vardy, who is burning up the midfield track and in career best shape.

With his price of $348,000, arguments could be made that there is more value or security in similar priced players such as new Tiger Toby Nankervis, Grand Final hero Tom Boyd, and new Gold Coast recruit Jarrod Witts.

JACK –Giles is a big watch list for me. If he looks like getting the number one ruck role and is gets close to averaging 14/15 disposals a game in the preseason, I would then have a serious think about including him in my starting line up. History says there is a 20 point gain up for grabs if he can achieve this.

Was good fun to get back on the horse of writing! tell me how good/bad it was on twitter @Jimbobholder

From AFL Photos' @michaelcwillson, "Shot my favourite headshot ever today. The big man politely declined an offer for me to digitally restore the front tusk. Respect ✊?"