Kicking off the Deck of DT is a returning Banned Bomber who Warnie thinks should be in your midfield. 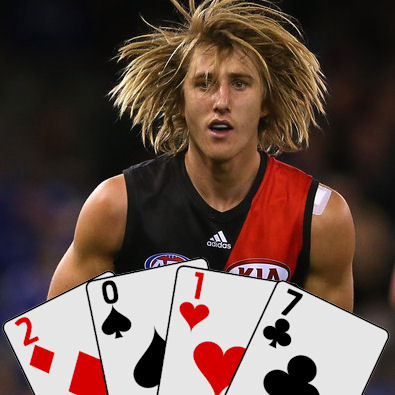 All of the returning Banned Bombers have been given a discount of 10%. Personally, I thought this was generous as they didn’t have to get a discount for their year out of the game. It wasn’t an injury and I believe that most of the lads were ‘naturally’ discounted as their output in 2015 was below where they had been before (cue Calvin’s jokes about why they were better the couple of years earlier).

Dyson Heppell is discounted on his 2015 average of 101.8, which sees him priced at 91.6. He has only gone lower than that in his first two seasons of footy.

Many coaches think players will be rusty coming back as a year is a long time out of the game. Maybe it’s because I am a Bombers supporter, but I think differently. I’ve got my glass half full thinking that they’re at an advantage because of this. Heppell (and co) have enjoyed a year out of the game. Whether it’s resting their bodies (Heppell has played basically five full seasons) or clearing their head. I can only see this as a good thing. It’s not like any of them let themselves go and they all basically back into a full pre-season.

Heppell’s career saw him average a massive 83.4 from 22 games in his first season, backing up with 85.3. His last three years has seen him go 95, 106.9 and 101.6, playing all but six games up until the 2016 suspension. Heppell’s average that he is priced on (plus the discount) was more than 5 points less than his best, so he is conceivably priced 15 points below his best.

Turning 25 in May, the midfielder scored 22 tons, including 12 over 120, in his last two years of footy including a high score of 152. He’s got a decent ceiling and with the year off, he’s just coming into his prime and that’s why I think he’ll average 110.

Maybe people are right – the returning Banned Bombers will be underdone an nowhere near their best (with the 10% discount, they would have to perform pretty ordinarily even to not do their job for their price).

The main issue with Heppell is his consistency. I mentioned his ceiling, well, in the last couple of seasons, he has been tagged on occasion. In 2014, his best averaging season, he dropped a 43 (v St Kilda) and had a handful of sub-85 scores when he copped attention. 2015 was better but six of his scores were below 90.

While he might be cheap, is he a keeper? If you don’t see him improving on his last season, a 101.8 average wouldn’t be ideal for the whole season, and selecting him just as a stepping stone might not be worth it.

KING – It was hard to think why you shouldn’t pick Heppell, so just do it. A ‘December lock’ for me without a second guess. Obviously we would want to see exactly how he rolls in the pre-season – including the JLT Series – but he’ll be at least 105 and with his Fantasy friendly game (including that with the Bombers who seemed to rack up some decent scores last year under Worsfold). If he is going at 100+ early on in the season, that is still fine as the Bombers have the round 13 bye and could be moved on if necessary – minimising the risk in starting Heppell or any other Bombers. If Heppell is available in the third round in Draft (after approximately the first 15 or so midfielders have been taken), then he is going to be a value pick in my view. Lock and load, baby!