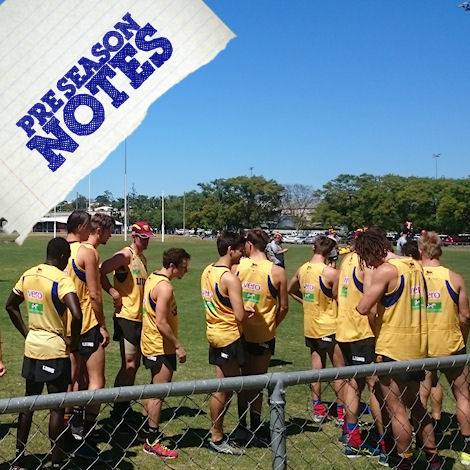 This is bloody interesting. Steve Johnson reached into his handbag (ok, that was a puss poor, I mean piss poor attempt at humour as he isn’t at Geelong anymore) for his phone, and has ruptured a tendon. He will have surgery next weekend and will be in a cast for six weeks. It sounds like Stevie J won’t hit up full training for three months, but should be able to keep up his fitness.

With an interrupted pre-season, you wouldn’t want to start the 33-year-old in Classic and despite producing draftable numbers in his first year at GWS, SJ should drop a few places on your pre-draft list as a result.

Gold Coast defender Kade Kolodjashnij has been a favourite of ours, not only because he is a Tasmanian, but due to his Fantasy game. In his second season (2015), he averaged 84 from 22 games and most pundits thought he would continue to improve. An average of 72.4 last season was down on his best and he is looking to improve on that in 2017… something we are excited for and could make him a good buy from the get-go next year (if he can fit the structure as the Suns have that early bye). Following a change in diet, Kolodjashnij’s quotes on the AFL website were positive.

“Last year was up and down,” Kolodjashnij said.

“I’m looking to put that behind me and learn from it.

“I just wanted to go one step further and I wasn’t living up to expectations and I was getting frustrated and getting down on myself.

“I was beating myself up a bit, just with that expectation I had on myself.

“I’ll take it as it comes this year and enjoy my footy again. I probably wasn’t enjoying it as much last year.”

Brodie Grundy impressing in the hills

The man who averaged 113.5 in the ten rounds following the 2016 bye, is impressing on the Pies’ annual pre-season trip to Falls Creek. Brodie Grundy will be one of the buzz players of the pre-season as he heads into his fifth season that has seen averages of 70.3, 60.7, 91.1 and 101 in his first four years. That second half of 2016 average puts him in the frame to be the best Fantasy ruckman of 2017. More on that later…

After not suiting up for the senior side in 2016 and playing just six games in 2015, David Swallow has joined full pre-season training with the Suns. In what will be his seventh season with the club, the almost 24-year-old should end up with a 30% discount on his 84 average from 2015 to make him priced under 60. If he is fit for round one, then Swallow has to be on your radar for AFL Fantasy Classic. As a MID only though, he is unlikely to be draftable in Elite.

D.Swallow will be priced under 60. You'd have to have a crack at that. #AFLFantasy

Banned Bombers and now Demons, Jake Melksham and Michael Hibberd, will return to full training post-Christmas. The club is keen to build their base before joining the full squad. Loads and how the lads (across the competition) return after a year out of the game will be an interesting thing to monitor over the pre-season.

If the team at Fantasy HQ give any of the banned players a discount, then there is a case for every single one of them due to many underperformed when it came to Fantasy numbers in 2015. (Some are potentially bargains without a discount).

* Jake Carlisle is also a month away from full training at the Saints.

? What discount, if any, should the returning "banned Bombers" receive in #AFLFantasy Classic for 2017? (Based on 2015 average).

Rocky back to training early

The Fantasy Pig we love hit the track this morning for the first time this pre-season… and a week earlier than expected. Acording to AFL Media reporter Mike Whiting, Tom Rockliff participated in all of the ball work and the heavy running session. Redemption for the Pig in 2017 after people have spoken badly of the elite star!

Rocky will be priced at 116.6 (his second highest career average), so some might avoid early on, but remember… he holds the world record for Fantasy average after posting 134.7 in 2014.

Which Eagles benefit from Sam Mitchell being in the midfield

West Coast assistant coach Justin Longmuir said the addition of Sam Mitchell will quite simply help Matt Priddis, Luke Shuey and Andrew Gaff. He says they will improve and that is what the Eagles will need to get right this season. Also named up was the midfield depth of Elliot Yeo, Liam Duggan and Dom Sheed.

Ex-Brisbane Lions forward Josh Green has signed with the Bombers as a delisted free agent. Don’t even think about picking him in Fantasy – he has averaged more than 60 just once in his career.

It’s official, following Jobe handing back his Brownlow and the AFL then saying he was ineligible, Sam Mitchell and Trent Cotchin were declared as the join winners of the 2012 award. Nothing Fantasy relevant in this, but you will find Cotchin had his best season by a mile.

GWS youngster Lachie Whitfield has accepted a six-month ban for ‘dodging ASADA testing’. That means he will be suspended for the first eight matches of the 2017 season.

I headed out bright and early to check out the Lions train in Yeronga this morning to catch up with our mate Zane Littlejohn who has scored a gig as a development coach with the club.

Most impressive on the warm morning for me was Allen Christensen. He was smashing the runs and looked sharp in everything he did. The former Cat had a mixed season with a shoulder injury after 11 games in his second season at his new club. An average of 67 puts him well below the 86.8, 82.6, and 83.2 he pumped out in the last three years. Christensen is on the permission to train list with the Dawgs.

Dayne Beams was among the rehab group doing plenty of running on his first day back. The positive is that he is on the track and will be an absolute bargain following two games at 86 (remember 101.1 was his lowest average in the five years prior). Hopefully his knee is all good after the two operations he had this year. Stefan Martin was also running laps and was looking good.

There wasn’t really a whole heap to get out of the day. It was a warm morning and everyone was in good spirits, even if a few were blowing on their first run in a couple of months!

Started my #AFLFantasy pre-season training today with @brisbanelions. A few of these blokes are on the watchlist for 2017. pic.twitter.com/I003Ix2BCY

Xavier Richards training with the Bombers

Delisted Swan Xavier Richards is this week training with the Bombers are looking a chance to be picked up for the 2017 season. The defender enjoyed his best fantasy return this year with an average of 69.3 from six games. With a discount coming, he offers some value but 70 is probably around about the ceiling for the 23-year-old. Richards averaged 68 from his 12 NEAFL games.

New chief of footy for Adelaide, Brett Burton, named up Cam Ellis-Yolmen as the front runner for the midfield place left vacant by Jarryd Lyons. In his five years in the system, CEY has played just 14 games – including two this season – spending a lot of time in the SANFL where he has posted some excellent numbers. This season he averaged 99 Fantasy points for the Crows reserves. The 23-year-old is likely to be priced around 60 points per game, much lower than his potential output. But does he improve enough… let alone be a consistent member of the 22?